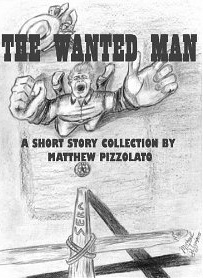 Western writer Matt Pizzolato has his storytelling down to a fine art. When he credits Louis L’Amour for what he knows about writing, you can believe him. His stories are told with that same clean, crystal-clear style. Not a word is wasted.

They also take place in a world akin to L’Amour’s. It’s a mythical West of dusty trails and frontier settlements, where characters often find themselves in a situation of kill or be killed. Someone usually dies in a Pizzolato story, and for good reason. It could even happen on the first page.
It’s a rough and tumble West of lawmen, outlaws, prostitutes, and anyone else you can think of who’s up to no good. That would include men who abuse women, a theme that appears in two of the stories in this collection.
As for more sanguine meetings of the genders, some of the stories generate a good deal of sexual steam. His cocksure outlaw Wesley Quaid is particularly irresistible. A lady contract killer in “In Plain Sight” decides he’s more fun alive than dead.
Pizzolato has a particular gift for dialogue that he got from somewhere (not L’Amour). I’m sure he came by it honestly, but there’s a bit of Elmore Leonard in the way his conversations turn into wry repartee. Even while he puts his characters into high stakes situations, they can’t resist the urge for a snappy comeback.
The mood of these stories ranges from humorous yarn spinning to the supernatural, and violence is the constant theme. You can be sure as you start into one that there will be blood. The Wanted Man is currently available for kindle.
Coming up: Tom Mix, Just Tony (1922)
Posted by Ron Scheer at 5:37 AM