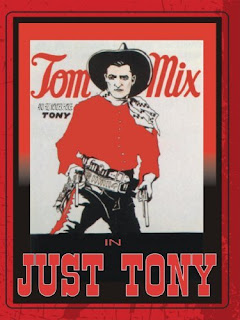 Appearing in over 300 movies during his career in Hollywood, Tom Mix made this film in honor of his horse Tony. In its 58 minutes, the film tells of a wild mustang also named Tony who has lived with his band of horses in the Nevada deserts. There he is observed by a cowboy from Utah, Jim Perris (Tom Mix), who hopes one day to be Tony’s owner and "pal."

Captured by a man who mistreats him, Tony is saved from further harm by Jim, who has come to town for a rodeo. His giving the horse-abuser a thorough pounding in the dusty corral is appreciated by an observer, the pretty Marianne, recently returned from an Eastern college.
Marianne’s father owns a horse ranch, whose stock is being driven off by his shady foreman. Jim helps Marianne buy four new mares by preventing Tony from losing a race at the rodeo, and Tony eventually escapes back to the desert. As the foreman and his cowboys go after the wild horses with guns, Tony retaliates by stealing away the four new mares.
Marianne hires Jim to capture Tony, promising the horse to him if he’s successful. The foreman tries to interfere, but Jim is able to catch Tony in a trap. He ropes and rides him, bucking bronco style, until Tony finally throws him, knocking the cowboy unconscious. Remembering how Jim had saved him once before, Tony takes an interest in the man's welfare and follows him back to his cabin.
In an exciting finish, as Marianne and Jim are dodging bullets while being pursued by the ranch hands, Tony comes to the couple's rescue. Together they ride on his back to safety at the ranch. There Jim settles an old matter with her father and instead of returning to the desert to roam free, Tony decides to stay with Jim.
Just Tony was adapted from the novel Alcatraz by Max Brand, which had appeared as a five-part serial the same year in Country Gentleman. The film was shot at Lone Pine in the Sierras of central California.
Pitched to a young audience, the movie is wonderfully unembarrassed in its sentiments. Talking to Marianne, Jim professes his love for Tony and his hope that Tony will some day love him. Rescued from abuse, Tony receives from Jim’s gentle hand the “first caress” he has ever known.
Tony is indeed a wonder horse, chewing through ropes, opening gates, and taking down fences. If we can believe the inter titles, he even has human thoughts. Concerned for Jim’s welfare when he’s waylaid by three bad men, he sees Marianne arriving and thinks, “A woman. More trouble.”
Mix is a warm, athletic presence before the camera. In his gigantic hat, wide leather chaps, and handsome shirts, he comes close at times to disappearing inside his outfit. Apparently doing at least some of his own stunts, he leaps over fences, rolls down a steep sandy bank, and rides the sunfishing Tony until he is thrown off.
The photography is often scenic, with snow-capped mountains in the background as horses and riders race across sagebrush flats, deserts, and wide rivers. Scenes from a rodeo include a parade, rough stock events, and a thrilling horse race.
Director and scenarist Lynn Reynolds is credited with 81 films during a Hollywood career cut short in 1927, when he took his own life during a party being held in his honor. Included in his credits are numerous westerns, including film adaptations of Henry H. Knibbs’ Overland Red (1920), Zane Grey’s Riders of the Purple Sage (1925),  and B. M. Bower’s Chip of the Flying U (1926).
Just Tony is currently available and streamable at amazon. Tuesday’s Overlooked Movies is the much appreciated enterprise of Todd Mason over at Sweet Freedom.
Sources:
imdb.com
maxbrandonline.com
Photo credit: Wikimedia Commons
Coming up: Kent Meyers, The Work of Wolves
Posted by Ron Scheer at 6:00 AM