Honoré Willsie Morrow, The Heart of the Desert (1913) 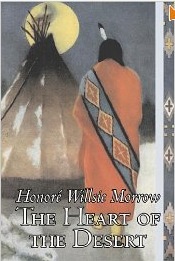 Georgia O’Keefe didn’t find the Southwest until more than a decade later, but it’s hard not to think of her in this story of a woman who undergoes physical and spiritual rebirth in the deserts of New Mexico. Rhoda Tuttle begins this story of romantic adventure as a severely neurasthenic young woman from the East, convinced that she is about to die.

Visiting friends at a desert reclamation project, she is courted by two suitors. Both of them are refined, gentlemanly products of an Eastern education, who slip into white flannels as the occasion calls for them. One, John DeWitt, is a white man of good breeding. The other is an Apache Indian, who has adopted an Anglo name, Charley Cartwell.
Rhoda, when she is not too dispirited to object, dismisses the solicitous attentions of both men. DeWitt wants her to marry him, but she does not want to burden him with her sick self and, she believes, imminent death. Charley, whose Indian name is Kut-le, triggers mixed feelings in her. Handsome, well polished, and courteous enough, he makes her uneasy.
And well he should. He is an Indian inside his khakis, and a thousand years of white civilization separate the two of them. Though he is trained as an engineer and has plans for study abroad at the Sorbonne, he is little more to her than a dressed-up savage. When he says he loves her and proposes marriage, flags go down all over the field.
Plot. Rejected by Rhoda, Kut-le calmly and coldly cuts to the chase. He changes into his Indian garb, which leaves his broad shoulders and handsome body next to naked, and he kidnaps her. For the reader ready for a no-holds-barred romance, this has to be a thrilling development. For Rhoda it’s mortifying and horrifying.
Tied to her horse, she undergoes all manner of agonies as Kut-le spirits her off into the desert, traveling by night in the company of three other Indians. One of them, a squaw named Molly, ministers to the angry, humiliated, and terrified Rhoda.
Meanwhile, a search party follows in pursuit, comprised of DeWitt and three other men. An army of cowboys at a nearby ranch combs the desert for Kut-le and Rhoda. The declared intention of everyone is to shoot the Indian on sight or string him up. DeWitt, intent on revenge, wants that honor for himself and says he’s grateful to live where “lynch law” would exonerate him in the eyes of any jury.
Kut-le, nonetheless, eludes capture, and weeks pass as they live off the land. The strenuous cross-country travel first worsens Rhoda’s health and then makes her stronger. Resting at a pueblo, she discovers that she’s come to love the desert. Contemplating its shifting colors and moods, she senses something of a mystery much larger than civilization itself. Though she’s never had to do a lick of work in the past, she volunteers to pitch in with the camp chores and learns to eat roasted desert mice.
In time, she begins to experience a kind of “Stockholm effect.” She regains some of her old respect for Kut-le, who has never been more than firm and friendly with her—a complete gentleman in all things, if you don’t count abduction. She even comes to admit her love for him. But marriage would mean crossing the “race barrier,” and that she doesn’t have the chops for. True love, he argues, overcomes all obstacles. She isn’t convinced.
She’s rescued, recaptured again, and finally set free. But when the search party finds Kut-le, she defends him and, to the amazement of all, confesses her undying love for him. Discovering that Kut-le would rather die than live without her, she agrees to marry him. DeWitt realizes he can’t win and gives up his desire for revenge. The couple is married at a conveniently located desert mission, and they ride off into the sunset.

Race. Few if any early western novels tackle the subject of race and race relations so directly as this one. Frederic Remington’s John Ermine of the Yellowstone (1902) ventures into this territory but with unhappy results. His white man raised by Indians makes a similar play for the pretty daughter of an Army officer, but all the cards are stacked against them, even though there’s no racial divide to keep them apart.
Morrow has stacked them another way, making her male lead an Indian educated by whites. Gifted with superior intelligence, he exhibits mastery of both worlds, Indian and white. Rhoda, meanwhile, is beautiful and intelligent, capable of flourishing in the right conditions.
She has courage, strength of character, and the ability to think outside the box she’s been confined to by her “civilized” upbringing. Consider the strait-laced, rigidly constrained social world of Edith Wharton’s women by comparison. The result for Morrow is an interesting, though speculative, journey of what would later be called self-realization.
Her desert experience would have been lost on the shallow, empty-headed girl in Remington’s novel. His story is one of tragedy, its characters the victims of class and cultural differences. Morrow adds racial difference and writes a romance that is also a novel of ideas. Challenging the sexual fears that underlie racial prejudice, it surely must have been regarded by many readers as scandalous.

Wrapping up. Is it a western? While focusing on a love that hardly dared speak its name in 1913, its story is certainly set in the West, and its desert setting plays a major role in the action. Far from the ill effects of city living, it offers healing and rebirth for people enervated by civilization and its discontents.
Teddy Roosevelt, we know, was a big advocate of the strenuous life offered by the West, to toughen both body and spirit. Zane Grey’s first novel, with nearly the same name as Morrow’s, Heritage of the Desert (1910), maps out a similar course of therapy for its sickly protagonist. Both novels involve perilous treks across desert wastes, as do Peter B. Kyne’s The Three Godfathers (1913) and Harold Bell Wright’s The Winning of Barbara Worth (1911).
So Morrow’s story figures into the East vs. West theme to be found in most early western novels, with an emphasis on the West’s health benefits. It certainly goes a big step farther by throwing off social and cultural restraints entirely to find spiritual health in passionate interracial love.
Iowa-born, Morrow studied history at the University of Wisconsin and married twice, the second time to publisher William Morrow. Her books include a three-volume biography of Abraham Lincoln. The Heart of the Desert is currently available at google books, Internet Archive, kindle, and the nook. Friday’s Forgotten Books is the bright idea of Patti Abbott over at pattinase.