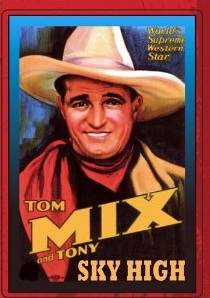 What a thrill this must have been for moviegoers in the early 1920s. Mix and director Lynn Reynolds go out for high adventure in the most spectacular canyon of all, Grand Canyon. Not only is there plenty of action up and down the canyon walls and in the water, but an airplane is worked into the story, with breathtaking aerial footage.

Plot. The situation in the story is unfortunately still topical 90 years later. Tom is a Deputy Inspector of Immigration, watching the US-Mexico border for illegal entry. This time around, it’s Chinese sneaking in, and we see him detaining a car full of passengers who turn out to be Chinese men dressed in women’s clothing. He ties a rope to the car and takes them into custody. All in a day’s work.
Next we learn that a couple of crooks have brought in 200 “chop suey eating Chinamen” along with a fortune in smuggled jewels and laces (yes, laces). Where they cross the border is not clear, but for unknown reasons they’re holed up in a camp at the bottom of Grand Canyon.
Tom gets an assignment to infiltrate the operation and learn who the kingpins are. There’s not much of a mystery to be solved. Tom finds out what he needs to know in short order and there’s only the matter of authorities to be notified and arrests to be made.
Also smuggled into the story is a romantic interest for Tom. A young woman, Estelle (Eva Novak), recently graduated from a “fashionable seminary” in Chicago, arrives at the Grand Canyon to summer with her guardian. Little does she know that her guardian is one of the alien smugglers. Affronted by the fresh advances of a male companion, she ventures into the Canyon alone and gets lost.
On an unofficial walkabout from the camp, Tom chances to meet her just as she falls from a ledge into enough water to get her soaked to the skin. He carries her, unconscious, to a ledge in the canyon wall where he provides her with blankets, a change of clothes, and some food to keep soul and body together. They picnic on crackers and sardines before turning in for the night.
Tom’s absence from the camp is noted, and he and Estelle are discovered by two of the villains. Tom is captured, fighting about 15 men until he's tied up and told that he can look forward to being drowned in the Colorado River. But he escapes, cutting his ropes with the sharp edge of a sardine can.
The rest of the film is a series of chases on foot and horseback, fistfights, and not a few daring stunts. Tom (or his stunt man) scales up and rappels down canyon walls like Spiderman. The most spectacular stunt involves climbing down a rope and hanging suspended from under a biplane, finally dropping with a splash into the river.
Tom. As in Just Tony (reviewed here last week), Tom lights up the screen with his presence. Unlike the lugubrious William S. Hart, Tom is eager, athletic, and quick with a smile. Not much in the way of a ladies man, he can get playful when a woman is around. He hangs a blanket for Estelle to step behind while she changes clothes, and though his back is turned you know he’s aware of her draping over it the garments she’s taking off.
Far more respectful and well mannered than the young cad who tries to steal a kiss from her, Tom waits until the last minute of the film to reveal his feelings. When her guardian asks Tom to look after her while he does time in federal prison, Tom says he’d happily look after her for the rest of her life! Then he joins her at the edge of a cliff and politely kisses her before the fade to black.
Just 50 minutes long, Sky High was one of the six to nine Tom Mix feature-length films produced every year during the 1920s until the introduction of sound. It is currently available and streamable at amazon. Tuesday’s Overlooked Movies is the much appreciated enterprise of Todd Mason over at Sweet Freedom.
Ted Kooser, Lights on a Ground of Darkness
Posted by Ron Scheer at 6:00 AM