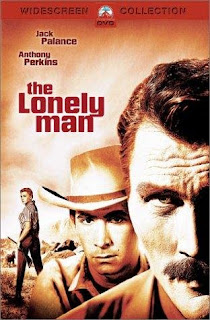 Jack Palance is the lonely man of the title of this dark western about a gunman trying to retire from a life of crime. He’s had 14 years of killing and thieving, including the death of a sheriff. His wife is among the dead, either pushed or jumped from a cliff into a canyon—also killed by him if we can believe his embittered son (Anthony Perkins).

Plot. Palance has come home, looking for his boy. He wants to make amends and, as it turns out, to make a man of him. Perkins hates the old man with a contempt that is consuming him. He is churlishly immature and resentful, even as he agrees to join Palance who wants to start a new life somewhere.
Run out of town wherever they go, Palance takes Perkins to the only place he’s still welcome, the ranch where he once lived with a woman who still loves him (Elaine Aiken). Here he settles in, intending to round up and break mustangs for a living.
But his past catches up with him. First a former partner in crime (Robert Middleton) shows up. Next it’s Claude Akins with a gang of four men, who have plans to steal some gold and want Palance’s horses. Finally, it’s a revenge-driven Neville Brand, with a bunch of his own friends, who has scores to settle.
Perkins gets to see his pa and Middleton in action as some quick gunplay resolves differences with Akins. Then in the film’s closing scenes, like the deadly shootout in many a western saloon, Palance eliminates Brand and his cronies. This he accomplishes with the help of Perkins, who has gained a measure of respect for the father he has hated. 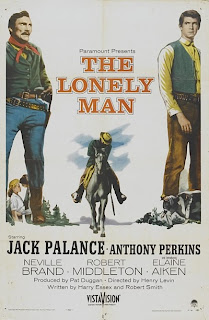 Themes. The story takes place in a grim world where hatred is the ruling passion. Palance’s steely gunman stands out by contrast. We rarely see him lose his grip on whatever emotions roil within him. Administering some well-earned tough love on Perkins, he shows the limits of his patience with the boy, but his cool is generally enviable.
In similar roles, Eastwood would have given the character his trademark slow burn, and there would have been moments of tender vulnerability from Alan Ladd. Gregory Peck would have given us a subtext of unspoken regrets. Palance is much harder to read. He has coldly resigned himself, maybe long ago, to an unforgiving world where no one can be trusted.
But he’s not cold-hearted, just very self-contained. When Aiken, in a pair of very tight jeans, tries to warm him up, we find that even sexual desire in him has been switched off. And we discover a secret he’s kept from everyone, that he’s losing his sight. For a man who has stayed alive by being quick and accurate with a gun, this development is a death sentence.
Wrapping up. I liked this film for its unsentimental honesty. It never once backs away from what it has to say about the loneliness of a world where it’s every man for himself. Brand’s continual storming gets a little tiresome, and one would like a stronger performance from the one woman in the cast. Aiken isn’t up to it. Otherwise, this noirish 50s western holds up well.
Shot in the Alabama Hills of central California, The Lonely Man was filmed in black and white, using Paramount’s widescreen process, VistaVision. Tennessee Ernie Ford sings the movie’s theme over the credits. The tune, played on a harmonica, gets a nicely mournful treatment at key moments during the film.
The Lonely Man is currently available at amazon and netflix. Tuesday’s Overlooked Movies is the much-appreciated effort of Todd Mason over at Sweet Freedom.
Coming up: Frank Lewis Nason, To the End of the Trail (1902)
Posted by Ron Scheer at 6:00 AM