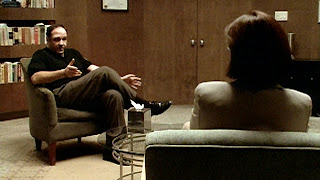 Heading into retirement, already ten years ago, I was totally at loose ends. Those last years ahead looked like a Black Hole waiting for me, the last fading light before that final black hole waiting for all of us. Added to that, there seemed to be a truckload of unfinished business, stuff I’d just let slide over the years.

Visits with a friendly counselor at my employer persuaded me that I could benefit from some time with a—hold your breath—therapist. And so I did.

After the first weeks of being not so sure about the whole thing, I began to think of those regular Friday morning sessions as a time to “connect the dots.” I saw patterns of behavior I hadn’t noticed before.

If you’re trying to picture this, forget those scenery-chewing scenes from In Treatment. It was more like Tony Soprano with his therapist. You never saw him reach for a Kleenex. For me, the whole experience was pretty dry-eyed. And it went on that way for more than a year.

Up until six months ago, that is, when it seemed clear we had reached a point of diminishing returns. By then retirement was looking pretty good and I was content to leave some of that original business unfinished. The psyche is the iceberg you never do more than chip away at anyway. So enough was enough.

But I’m still connecting dots. And looking back, I can say the two of us had some fundamental disagreements. I was satisfied with what I’d put together for myself. The therapist did not seem to be. We had different ideas about what would make a happy ending for the story of my life.

And I think I know the reason why. At some point in the process, I began to realize that my therapist was not a reader. If I brought up something I’d read in a book, I’d get this look of impatience. And I’d quickly get nailed for “intellectualizing.” I was supposed to focus on my feelings, which I seldom seemed to have at my immediate disposal.

OK, fair enough. I’ll admit feelings are my short suit. And I should clarify—my own feelings, not someone else’s, which I’m much better at gauging. But God forbid I should introduce an idea into the discussion. It was like bringing up Darwin or the Marquis de Sade in Sunday school.

I’d argue (and a lot of good it would do me) that talking about ideas is another way of talking about feelings. They don’t just go together; they are deeply wedded. For people who just read for the plot—as if a book was an amusement ride—what I’m saying may not make much sense. They seem not to know that ideas can be as emotionally profound as a touch from a loving hand or a punch in the mouth.

So my next therapist, should there ever be one, has to be someone who reads books. Not just therapy manuals and self-help books, but real books. Books with ideas in them. He (or she) has to have some acquaintance with Dostoyevsky, Camus, and Twain. Folks like that have been family to me, and if they’re not welcome with me there on the couch, then forget it.