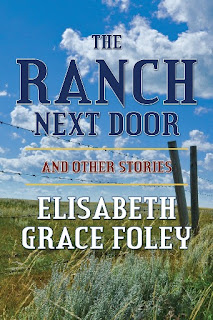 The cover of this collection of stories by Elisabeth Grace Foley nicely captures its mood. After an excursion into the dark frontier world of a writer like Nik Morton, whose Bullets for a Ballot was reviewed here recently, readers would find themselves in a far sunnier West. Yes, there’s barbwire running through it, but it’s a “kinder, gentler” West, where a conflict is as likely to be solved at the point of an umbrella as the point of a gun.
Foley has a firm, intelligent grasp on the storytelling style she brings to her subject matter. The tone and mastery of language is consistent throughout. After a couple stories, you just know you’re in competent hands.
And it’s not diminishing them to say they hark back to the world of TV westerns like Gunsmoke and Bonanza. Relationships between friends and family members matter, and while violence lurks like a shadow in the corners, it’s often driven back or defused without serious bloodshed.
Often, I should say, but not always. Just as a sunny day in Dodge may be overtaken by storm clouds, there’s a good chance in Foley’s stories for events to take an unwelcome turn. Likewise, what may seem threatening can be revealed as its opposite. Such is the case in “Angel Unawares,” when a young rancher has a nasty fall from his horse while searching for lost cows in the herd of an unfriendly neighbor. Or when a doctor helps deliver a baby for the woman in the title of “The Outlaw’s Wife.”
While a handsome, good-natured young cowboy often figures in these stories, Foley’s gift for characterization is especially engaging in her portrayals of sheriffs. As one example, there’s Sheriff Coughlan in “Disturbing the Peace,” who’s a well-respected public servant. But he learns, like Willy Loman, that while he’s liked, he’s not well liked.
Sheriff Graham in “Delayed Deposit” is a bit out of shape and likely to turn red in the face with little provocation. Outside the town bank during an attempted robbery and trying unsuccessfully to handle a hostage situation on the inside, he’s lucky to have the help of his quick-thinking deputy.
That last story, by the way, is my favorite. It builds considerable tension as the stakes mount for everybody, hostages and gunmen, and the clock ticks away precious minutes. Foley shows her ability to take familiar western material and western characters, and make something fresh and engaging with them. Just as the writers of Gunsmoke did for 20 years, and rarely disappointed us.
The Ranch Next Door is currently available at amazon. You can follow Elisabeth Grace Foley's blog, The Second Sentence, here.
Elisabeth has generously agreed to an interview here at BITS, and I’m turning the rest of this page over to her. 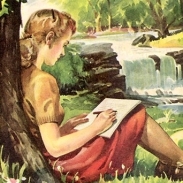 Interview
What makes these stories "western" for you besides the fact that they are set in the West?

Probably the fact that they take place on a frontier-partly-settled, still-changing, where daily life was different in many respects from life in the long-civilized East, and the kind of life I've always known myself. I think it may even be that intriguing difference from my own life that has attracted me to the Western in some ways.
What do you think of as the essential elements of the traditional western story?
Horses, perhaps? Well, seriously...if you mean "essential" as in "necessary" I don't think it's carved in stone. There's a lot of different ways to tell a story. But the common denominator of most Western stories seems to be the aspect of frontier life that I mentioned before.
How much is the actual history of the American West part of your interest in the genre?
It's definitely a significant part. I've always been fascinated with history. Studying Western history is a little odd at times, because of the way the "Western myth" has complicated things. Set up opposite those who embrace and exaggerate all the clichés of the genre, there seems to be a school of thought that likes to say, "Nothing happened the way it does in books and movies."
I was more exposed to that point of view early in life, through textbooks and children's history books, so my more recent reading has been a revelation of sorts, in finding out that some elements of the West were surprisingly like the movies (or even more interesting).
Your stories are mostly about male characters and told from their point of view. Is there a reason for that?
It wasn't really a conscious choice I made-it just happened that way. I tell each story from the perspective of whichever character seems most natural, and so far they've all been male. I'd like to write a story with a good female point of view sometime, but so far none of the ideas that have come into my head have lent themselves to that.
Where in the West do you imagine your stories taking place and in what time period?
Most of them are intended to be set in the 1880s/90s to turn-of-the-century period. I stuck to fictional towns, since none of the stories are centered around actual historical events or places, but I did have an idea in my head about what part of the country they were supposed to be set in. "Delayed Deposit" I think of as being in the northern plains region, like Montana or the Dakotas, and probably "The Ranch Next Door" too. "The Outlaw's Wife" hints at a Texas setting, and most of the others I imagined somewhere in the middle West.
Talk a bit about the creative decisions that went into the cover for the book.
I wanted something to evoke "The Ranch Next Door," since it provided the title for the book-the setting of springtime on the plains, and the barbed wire representing the conflict of the story. I picked out the photo, and cover artist J. Simmons did the design. I originally had envisioned a different type of font for the titles, but during the design process everyone I showed the early attempts to was immediately enthusiastic about his font choice-and after a little tweaking of the colors I realized they were entirely right. I'm very happy with the way it turned out.
If one of your stories was made into a movie, who would you like to see in the lead roles?
I don't know. At this point I'm the kind of author who'd be scared to death at the idea of someone adapting my work for the screen.
I believe you've been reading older popular novels from 100 or so years ago. What do you learn from them?
It gives you a glimpse into the time the books were written that you don't really get even from good historical fiction-the way people talked and thought, small details about everyday life. I don't necessarily use things that I read directly in my own stories, but I think it does give me a better feeling for the time period. Besides which, I've discovered some fine writers, too, and I'm always learning more about writing from what I read-from observing what works (and what doesn't) and why.
What have you learned from your readers?
The most encouraging thing has been learning that there is an audience for my work-that people actually liked what I wrote! For a first-time author that's a great relief. And I've had a first-hand glimpse of how individual tastes differ, from how people have different favorites among the stories (even though there are a couple that seem more popular than others).
How would you hope to be an influence for other western writers?
I'd like to be able to demonstrate that it's still possible to write a solid Western that is suitable for a wide audience. I believe you can write an interesting story without excessive violence or profanity, without making it seem "sanitized" or childish, and I think there is an audience of readers who would welcome that kind of story, as they did years ago.
What can readers look for from you next?
I'm not entirely certain yet. I have one or two projects nearly finished; one is a short historical mystery, another is a comedy. At some point I would definitely like to put together another volume of short stories-I'm always working on one or two, and sooner or later they'll add up into a collection.
Thanks, Elisabeth, for taking the time to join us at BITS today. Anything you would like to add that we didn't cover?
No, I don't think so. Thank you for having me!
Coming up: Elizabeth Higgins, Out of the West (1902)
Posted by Ron Scheer at 6:00 AM