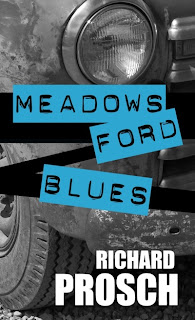 Review and interview
Having grown up in Nebraska, I’m struck by two things whenever I return. It used to take years for whatever was new on either Coast to make its way there to the middle of the country. Now—whether smart phones or crystal meth—it makes the trip in a week or less. The other thing is that, despite all this constant change, the people who live there remain pretty much the same.

Richard Prosch captures this nicely in these stories set in 21st century Meadows Ford, his fictional small town on the lower Niobrara River. People gamely carry on, long used to playing catch-up with the rest of this crazy country. What they know is that out here the ripple effects from the Northeast Corridor in the East and Hollywood in the West more or less cancel each other out anyway.
My favorite stories in the collection focus on the MFPD, whose line of duty puts them where past and present have their way of colliding. A police chief’s old girlfriend shows up in town decades later driving a car he’d long thought had been junked. His memories of an accident while driving that car intermingle with the daily routine of protecting and serving. Meanwhile, a wind farm worker is found murdered and duct-taped to a tree.
Surely the strongest character in the stories is redheaded deputy Jennifer Rand, a decorated veteran from Afghanistan. Quick thinking, tough, serious, she gets the job done. More than a match for killers who get their loony ideas from bad TV, she’s not above dropping an armed assailant in a church basement.
Actually, the past is often rearing its hoary head to disrupt the present. When a man finds an old high school keepsake near the scene of an unfortunate farm accident, he tries to find the owner and unravel a mystery. He learns too late that it would have been far better to forget the whole thing.
A man in a car follows a woman who once dumped him. That little display of male ego doesn’t end well either. In another story, there’s a big surprise in store when a contract killer comes back to town to do away with a man who’d once been a boyhood buddy.
A couple stories actually drift out of the distant past like ghostly memories of forgotten times. Anti-German sentiment during the Great War leads to the death of a young woman in a barn fire. The drunken owner of a threshing machine reaches the limits of his neighbors’ patience. In another favorite story, an alcoholic in a rusty pickup befriends and entertains a young girl with an oral history of violent deaths he’s witnessed.
Richard Prosch has a way of telling a story that’s all his own. Out here in his Nebraska, the snow flies and the big sky comes down like a cast-iron lid on the flat horizon. Meanwhile, his rural people live small-town lives where ironies and surprises wait sometimes decades to overtake them. Meadows Ford Blues is currently available as an ebook at amazon.
Interview
Richard has agreed to be here at BITS today to offer his thoughts on several topics, and we happily turn the rest of this page over to him.
Richard, another Midwestern writer, Nelson Algren, said that ruthlessness and a sense of alienation from society are as essential to creative thinking as they are to armed robbery. Has that been your experience?