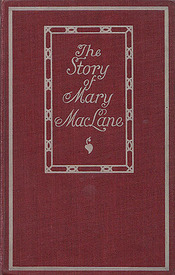 Mary MacLane (1881-1929) was a sensation in 1902 and still has a following today. Coming of age in Great Falls and Butte, Montana, she may as well have been living on the moon. She couldn’t have been farther from a place that might have felt like home.

On the other hand, where but the Wild West would someone so outspokenly individual and unconventional belong? At the tender age of nineteen, Mary poured her heart and soul into a book that would have found its peer in the excesses of half-fictional, sensational memoirs produced today.

At the time, every page of her “story” was sure to shock all but the most freethinking of readers. She proclaims herself a genius for being able to analyze herself from as early as age three. And what she’s learned would lift a good many eyebrows today. She’s in full rebellion against virtue, respectability and the social roles imposed on women—marriage and motherhood included.

She doesn’t make her case for independence politely either, which was surely even more shocking in 1902. Happy she is not. Her life a misery, she’s the younger child of a conventional family who have never loved her, as she repeatedly laments. A high school graduate and a book reader, she can quote Byron and Tennyson. Beset with a soul-deep loneliness, she keeps to her room or wanders the countryside, thinking her thoughts.

Structure. The book takes the form of a journal, kept through three winter months. There is no plot to her “story.” She calls what she’s writing a “Portrayal,” a description of her character, with little reference to other people.

Instead of a step-by-step unfolding of her character, as we’d expect from someone given to self-analysis, the book whirls obsessively through a cycle of its handful of themes. The Devil, for instance, is fondly mentioned early and often, each repetition like a refrain in a song that never changes.

Besides the Devil, there’s hardly another person besides Mary. Her family is depicted cunningly as five detestable toothbrushes in the bathroom. She mentions befriending an old Irish woman whose reputation is so black that no one but Mary will visit her.

And then there’s her memory of a literature teacher, a woman, who seems to have cared for her but who is now far away. Mary refers to this woman, Fannie Cobin, as “the anemone lady” for her tender mercies and sweetness. She admits to being madly in love with her and yearns for her company again.

Women. Mary MacLane has been something of a heroine for feminists from the day her book hit the stands and became a bestseller. She may have been counted among suffragists at the time, but her book is not a call for women’s rights. It has no agenda. It’s a manifesto with a litany of personal grievances. Anyone, male or female, who has lived in isolation from kindred spirits could identify, but she has no tears to shed for them. For all she knows, no one else like her exists.

The burdens of marriage and motherhood may be fine for other women, just not for her. And the portrait she paints of miners’ wives and other working class women is far from complimentary. Crowded together in their neighborhoods, they are obsessive gossipers, given to profanity, and like as not fond of the bottle.

Romance. If she must marry, she says, she’d gladly marry the Devil. He’s not only more fascinating than the standard, dull male, but she expects him to offer a passionate love that not only crushes her but consumes her brutally and cruelly. Surrendering to him, she knows she would finally be happy. (Shades of Shades of Grey.)

The Devil gets a walk-on near the end of the book as he coolly considers and then declines her offer of marriage. Maybe some other time. This development doesn’t seem to discourage her. The encounter was only an imagined one anyway.

A sensualist, she adroitly analyzes and celebrates the joy of eating an olive, following the nibbled bits of it all the way to her stomach. One suspects that there’s an unexpurgated version of the novel where she follows those bits further in their journey through her body.

Wrapping up. Mary MacLane was born in Winnipeg, Manitoba. Her family moved to Minnesota and from there to Montana. Her book, published in Chicago, rocketed her to fame. Before long, she was living in Massachusetts and then Greenwich Village, where she continued to write and, one presumes, live the Bohemian life she was temperamentally suited to enjoy.

She had two more books, My Friend, Annabel Lee (1903) and I, Mary MacLane: A Diary of Human Days (1917). She was living in Chicago when she died at age 48. Memory of her has been revived in recent years, with republication of her works, critical attention, and a stage play.

The Story of Mary MacLane is currently available at google books and Internet Archive and for kindle and the nook. Friday’s Forgotten Books is the bright idea of Patti Abbott over at pattinase.