Jon Billman, When We Were Wolves 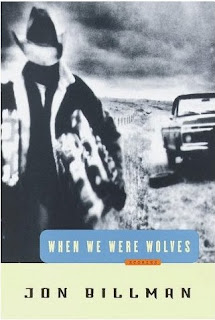 First published in 1999, this entertaining collection of short stories is set in the rural West and mostly in Wyoming. It is a comic world where men are men and, consequently, the women have a monopoly on intelligence. These guys hunt, they fish, they drink beer, and remain faithful to an adolescent disregard for law and order, taking delight in irritating their conventional, god-fearing neighbors and giving themselves to amusements like Little Bighorn reenactments.

My favorite is the title story about an ice hocky team from the state pen, who love the fierce brutality of the sport more than scoring. Close seconds are a series of stories about two buddies in Hams Fork (a fictional stand-in for the author's home, Kemmerer), Wyoming. One is a vaguely disgruntled history teacher and the other a painter, who decorates the town water tower one night and, immobilized by a ruptured disk while playing golf, has a close encounter with hypothermia.

Most of the women involved with the men in these well-written stories make only brief appearances, because they're either long-suffering or in possession of the good sense to move on. When We Were Wolves is available at amazon and AbeBooks and for kindle and the nook.  Friday's Forgotten Books is the bright idea of Patti Abbott over at pattinase.