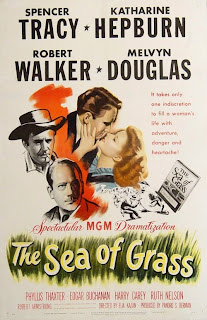 This Tracy-Hepburn domestic melodrama is set in the West and has some of the scale of George Stevens’ 1957 epic, Giant. But despite its dynamite cast, the film lacks what it needs most—wide screen and color.

Stock footage near the beginning of wind blowing in tall grasses and dramatic long shots of riders passing along the foot of a sheer cliff face promise some visual wonders. But with key exteriors obviously built on a sound stage and with the frequent use of process shots, you get the feeling that Tracy and Hepburn hardly left the comforts of home.
Plot. The film is based on Conrad Richter’s 1937 novel of the same name. Set on the open ranges of New Mexico, it tells a familiar story of a cattleman (Tracy) fighting an influx of homesteaders. Wearing his big, tan LBJ Stetson, he looks the part. But stiff and stern through most of the film, he rarely expresses the warmth that normally makes him a pleasure to watch on screen.
Hepburn, at the age of 40, is a bit spinsterish already to be playing an impulsive young woman who comes from St. Louis to the frontier to marry a man she hardly knows. When her sympathy is torn between her husband and the settlers he hates, the marriage begins to founder. Bored and left alone much of the time, she has a dalliance with a persistent suitor (Melvyn Douglas).
This is where the 1940s-style melodrama moves in on the plot. A second child is born, and close attention to the dialogue reveals that Douglas is the father. Hepburn eventually returns East for good, leaving the children with Tracy. The boy grows up to be the stereotypical rich man’s son (Robert Walker), misbehaving and counting on his father and the family lawyer to get him out of any trouble.
An exchange of gunfire over a card game turns him into a man wanted for murder. And by film’s end, Walker is dead himself. Tracy and Hepburn’s daughter (Phyllis Thaxter), long estranged from her mother, reunites her parents and after two hours we get to the last fadeout.
Is it a western? Well, yeah. It has the familiar elements, including a large contingent of cowboys, herds of cattle, horses, guns, a ranch, a saloon, a frontier town.
What it does lack is a real western villain. Tracy’s cattleman may give the usual argument that the cattlemen tamed the frontier and for that reason deserve privileges that the homesteaders do not. But he’s right about something else. Turning the grasslands into farmland would be an ecological disaster. Recent memories of the Dust Bowl would have met with agreement from 1940s viewers. So he’s not the usual cattle-baron villain.
Douglas might qualify, as the man who lures Hepburn into adultery (and, oh, how gingerly that subject is portrayed). But he’s not a cad or a bounder either. To the end, he keeps trying to persuade Hepburn to marry him and provide a proper home for their son.
But maybe before all that, it’s a Tracy-Hepburn film, the fourth one they’d made together. Not quite a genre, but certainly a franchise, the combination of the two would become truly memorable in the romantic comedies that followed: Adam’s Rib (1949), Pat and Mike (1952), and Desk Set (1957).
Wrapping up. Deserving mention are the supporting actors, Harry Carey as a town doctor and Tracy’s longtime friend. Lifting the film from the melodramatic doldrums is the wonderful performance of Edgar Buchanan as Tracy’s cook. First gruff and ill tempered, he becomes an endearing presence in the ranch house, devoted to his employers and their children.
At two hours, the film has the feel of being inflated from Richter's modestly short novel. Director Elia Kazan is said to have been embarrassed by it. And to be honest, it hardly seems the work of the same man who directed films like A Streetcar Named Desire (1951) and On the Waterfront (1954).
Kazan’s reputation in Hollywood has been troubled by his naming names to the HUAC. And it’s an interesting irony that the screenwriter for The Sea of Grass, Marguerite Roberts, was blacklisted during the 1950s for refusing to do the same thing. Roberts, it should be added, returned to Hollywood in the 1960s and is probably best remembered for her screen adaptation of Charles Portis’ novel, True Grit.
The Sea of Grass is currently available at amazon and netflix. Tuesday’s Forgotten Films is the much-appreciated enterprise of Todd Mason over at Sweet Freedom.
Photo credits: Wikimedia Commons
Coming up: Elisabeth Grace Foley, The Ranch Next Door
Posted by Ron Scheer at 6:00 AM