This is a mining camp story set in western Colorado, written by a geologist. Born in Wisconsin, Frank Lewis Nason (1856-1928) was a graduate of Amherst and worked as a mining engineer in Central America, Canada, and various western states. Well into middle age when he began writing novels, he already had a long list of publications on geological subjects. 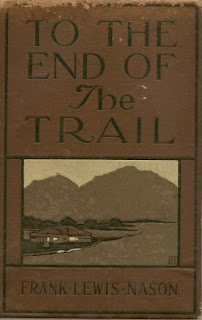 While you might expect this novel to be coldly or at least stiffly scientific, it reveals a tempest-tossed imagination. It’s about the destructiveness of gold fever and the misfortunes of a weak man who succumbs to it.
Plot. The narrator lets us know early on that Herbert Ingalls and his pretty wife Mary have made a big mistake leaving the East to start up a new life in the West. Neither of them has the chops for it. Will power, stamina, and nerve they’ve got in good supply. What they lack is good sense.
They start out with a hastily purchased goat farm. Western living would have panned out for them by the end of the novel if they’d just stuck with the goats. But no. There’s a big gold strike in the mountains nearby, and Ingalls decides he won’t settle for anything less than a fortune. He wants to go for the gold.
Chase, an educated and reserved man he hires to look after his goats, cautions Ingalls against acting rashly. Alas, it takes more than cautioning. Ingalls willfully falls in with a bad bunch determined to fleece him. An imposing saloon owner, Hilda Bergstrom, known as "Big Swede," suckers him into a deal that has him mortgaging his farm for partnership in a worthless claim.
Chase, who knows her to be a fraud, extricates Ingalls from her grasp, but Ingalls gets himself right back into trouble again. Drunk and disorderly in Big Swede’s saloon, he picks a fight with one of her partners in crime, Smutty Mike. In a melodramatic conclusion, there are gunfire and casualties.
Character. Nason is, without doubt, fascinated by the corruptive lure of gold fever. He wants to show how the prospect of sudden wealth makes fools of men who lack strength of character. In the case of Ingalls, he loses his head and becomes the prey of his own worst impulses.
Chase, on the other hand, is a model of upright manhood and clear thinking. We learn that he has been trained back East as a lawyer. He’s also been in the West long enough to know you have to be careful who you trust. Most people on the frontier are either ignorant or unscrupulous. Or both.
East vs. West. The West, Nason’s narrator observes, is a land of excess. Living there requires the strength of character to survive the process of natural selection. The West is for those who live large, whether for good or ill. Where only the fittest survive, a man has to keep his head while taking big risks.
By comparison, a man of weak character is never put to this kind of test as long as he resides among the civil conventions of Eastern society. There, where risks are few, a mediocre man can live his life propped up by those around him. He gets his strength from the social structures that define him. Few western writers are so forthrightly analytical in their portrayal of the difference between East and West.
Women. Two women figure in the story, each a foil of the other. Mary Ingalls has genteel interests and likes to pass the time by taking her sketchbook and paint box out into the desert. A prospector friend, Peter, disapproves of her paintings because they are too timid. He tells her she needs to find the courage to tackle big landscapes, where she might show some evidence of having an artist’s soul.
The Big Swede is a corker. Something of a siren, she turns men into putty. She’s also a clever schemer and a sharp manipulator, both of which make her a keen businesswoman. At the first news that a boomtown is about to spring up near a newly discovered gold field, she’s got her bags packed. Within days she’s bought lots in the new town and is throwing up a canvas tent to house a saloon and gambling den.
Wrapping up. Informed in its depiction of prospecting and mining, the novel is interesting for its immersion in that world. Its knowledge of crooks and chicanery also grounds the novel in a believable world.
While at points it shifts into high melodrama, one can argue that the book is really meant to be a tragedy. If you can work up sympathy for the characters, it’s that they are at the trail’s end of a long series of bad choices. Even Chase, who has the qualities of a hero, leaves a reader somewhat cold. For all his qualities, he is proof that no good deed goes unpunished.
Nason went on to publish a number of other novels, and he seems to have eschewed both slick and pulp magazines. Alas, like many other writers of popular novels at the time, he is largely if not totally forgotten today. To the End of the Trail is currently available at google books and Internet Archive and for the nook.
Friday’s Forgotten Books is the bright idea of Patti Abbott over at pattinase.
Image credit: Wikimedia Commons
Photo of author, Frank Leslie's Popular Monthly, 1902
Coming up: Spencer Tracy, The Sea of Grass (1947)
Posted by Ron Scheer at 6:00 AM