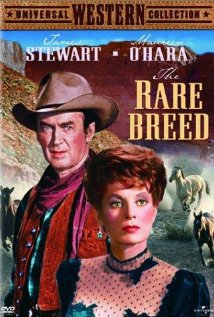 Here’s a film that takes what may seem an unpromising premise and spins from it a heck of a western yarn. The premise has to do with the introduction of Hereford stock on the Texas plains and cross breeding them with Longhorns. That much is historical fact. The story woven around it is pure Hollywood.

Plot. Irish-born actress Maureen O’Hara plays the widow of an English cattle breeder. It’s 1884, and she shows up in St. Louis with her daughter (Juliet Mills) and a prize Hereford bull called Vindicator. The bull gets sold at auction to a Texas cattleman, and O’Hara persuades a cowpuncher (James Stewart) to deliver him to Texas.
There’s interference from another rancher, whose henchmen (Jack Elam and Harry Carey, Jr.) pay Stewart to turn the bull over to them instead. This scheme falls through when O’Hara and Mills insist on accompanying the bull all the way to Texas.
Elam, playing a nasty heavy, ambushes Stewart, the women, and the bull. He stampedes a herd of cattle being taken to market by handsome young Don Galloway. Stewart eliminates Elam, and everyone else is unscathed, except for Galloway, who has been badly injured.
As they all finally arrive at the ranch in Texas, we discover that the bull’s buyer is Brian Keith, hidden behind a bush of facial hair and speaking a Scots accent broader than the Pecos. The injured cowhand is his son. Vindicator is released among the Longhorns and, with winter coming on, the women talk of returning to England.
Father and son have different ideas and are looking to wed them. Mills needs very little sweet talk to accept a hug and kiss from Galloway. O’Hara puts off the insistent Keith, even when he bathes, shaves, and shows up in regimental uniform (not a kilt) playing the bagpipes.
A bad winter decimates the Longhorn herd, and Vindicator himself does not survive. All except Stewart have lost faith in the future of crossbreeding. When a Longhorn mama cow is finally found with a Hereford calf, we learn that Vindicator has been doing his job. Stewart himself is vindicated, and O’Hara decides she’d rather spend the rest of her years with him instead of Keith.
History vs. myth. The crossbreeding of Longhorns with European stock was actually a big success. So much so that by 1927 Longhorns had been replaced on the range and were nearly extinct. The couple of hundred thousand of them that exist today are the result of government-funded efforts to restore the breed.
I normally don’t pick on westerns for inaccuracies, but the lapses in this one are noticeable. The proper English women in the film ride astride their horses instead of sidesaddle, which would have been unthinkable for a respectable female. Stewart’s character is introduced as an expert modern-day style bulldogger, a rodeo event that was not invented until after 1900 by a black cowboy, Bill Pickett.
These gaffs are actually fairly easy to overlook, but on a really important subject like American geography, the film gets an F. Traveling to Texas from where the film starts in St. Louis involves a journey by train to Dodge City. Not the most direct route, but there’s the convenience factor of getting there by rail.
After that, the journey would require a weeks-long trek across several hundred miles of Kansas and what would have been Indian Territory. They accomplish this in a matter of days, in an open horse-drawn wagon with few supplies, and not a single mention of Indians. Shot entirely in California, the film fails to replicate the flat distances of the Plains. The cattle stampede takes place in a rocky canyon that is archetypal western, but only because it looks like someplace in the desert.
Maybe the most telling moment occurs near the end as Stewart picks up and carries off a newborn calf, without the slightest objection from its mother. In reality, it would have taken more than an expert bulldogger to survive an encounter with an outraged mama cow.
Wrapping up. OK, despite all that, The Rare Breed is still a lot of fun. There are some rollicking brawls and fistfights and a spectacular couple of stunts. The cast includes not only the incomparable Jack Elam but the incomparable Ben Johnson, who has an early scene on crutches.
Maureen O’Hara’s try for an upper-crust English accent doesn’t quite ring true, especially with English actress Juliet Mills as her daughter in the same scenes. But the two women are a gracefully determined presence in the film. Meanwhile, Brian Keith is truly funny as a Scots rancher. And James Stewart is himself, especially as he stumbles self-consciously in a conversation about breeding with Mills, who is unembarrassed by the subject.
The script was written by Ric Hardman, who is also credited as the writer for the TV series Lawman (1959-1961). Andrew Victor McLaglen directed. His credits include two John Wayne westerns, McClintock! (1963) and Chisum (1970), as well as many episodes of TV’s Have Gun—Will Travel and Gunsmoke.
One last note. Cullen Gallagher discusses Theodore Sturgeon’s novelization of the film over at Pulp Serenade. Readers there will learn that Sturgeon’s interest in historical authenticity seems to have far out-paced that of the film.
The Rare Breed is currently available at netflix and amazon. For more of Tuesday's Overlooked Movies click on over to Todd Mason's blog Sweet Freedom.
Photo credits: Wikimedia Commons
Coming up: Richard Prosch, Meadows Ford Blues
Posted by Ron Scheer at 6:31 AM