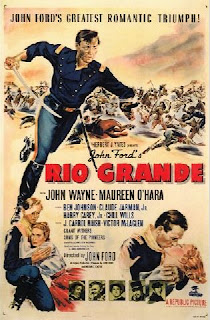 The story goes that Herb Yates at Republic Pictures agreed to make John Ford’s The Quiet Man only if he’d make another western first. So Ford went with a script from a James Warner Bellah story to Moab, Utah, and shot this classic western with John Wayne and Maureen O’Hara. Both would go on to star in The Quiet Man (1952).

It’s not hard to see this film as a warm-up to the success of Ford’s sentimental journey to Ireland in the later film. Here Wayne is a colonel and commanding officer of a cavalry post in Apache territory. O’Hara is his stunningly beautiful wife, a Southern belle (with no Southern accent, but enough Rebel attitude).

Plot. The two of have been separated 15 years, long enough for their son (Claude Jarmin, Jr.) to grow up and enlist in the Army, after failing a course or two at West Point. As chance would have it, he shows up at Wayne’s outpost, a raw but very proud recruit. His mother (O’Hara) arrives soon after, intending to pay for the boy’s release from his enlistment.

For quite a while, it’s a standoff between three stubborn people. But Jarmin holds the deciding vote, since he has no intention to leave the Army and wants to prove himself a man. If not to his father, at least to himself. He soon makes friends with two others fresh from boot camp, Harry Carey, Jr., and Ben Johnson. Meanwhile, O’Hara stays at the post, all the time hoping that Wayne will unbend enough to admit there’s a place for her in his heart besides the cavalry. Turns out there is, and the movie becomes, in an understated way, about two estranged people falling in love again.

There’s action aplenty as the Apaches go on the warpath. They are able to avoid capture by crossing the Rio Grande into Mexico. When a wagon train of officers’ wives and children are ambushed and the children stolen, Wayne and his company follow them and, in a shootout with the Apaches, retrieve the children.

Playing key roles in the action are the three young recruits, Johnson, Carey, and Jarmin. Johnson’s role is complicated by the fact that he’s avoiding arrest for manslaughter in Texas. In the end, Wayne has been sidelined by an arrow to the chest, and O’Hara has resumed her place by his side. The three young soldiers get commendations for valor, having proved not only their courage but their manhood.

A Ford classic. Compared to a similar Ford western, Fort Apache (1948), this film is more scaled down in its aspirations. The setting is grand and photographed in dramatic black and white, but the story is more focused on the family at the center of it. Besides Johnson and Carey, there are several other characters in memorable roles, Victor McLaglen as a blustering sergeant, Chill Wills as the company doctor, and J. Carrol Naish as the general.

The Ford touches are all over the place, with moments of humor balanced against hard-driving action and scenes that tug at the heart. For the latter, there are the hopeful looks on the faces of the officers’ wives lined up to watch the soldiers return from fighting. The strains of “I’ll Take You Home Again, Kathleen” underscore several scenes.

There’s a gritty edge at times, as well. Bodies of dead Indians lie in a row on the ground after a battle, as a scout identifies each by the tribe they come from. We see cavalrymen shot from their horses. In a spectacular stunt, one is shot and falls under the galloping horses pulling the wagon he is driving. Actual Native Americans were cast in the roles of the Apaches.

John Wayne. This film is interesting for showing Wayne in a way that is not his usual larger than life western hero. Here, he seems very much someone given a difficult job and struggling manfully to just get it done and honorably, despite the odds. There are times when his face seems contorted with painful emotions: worry, regret, loneliness, the need to do his duty. Having his son under his command is an added burden.

Physically, Wayne also looks worn down by his responsibilities. His face sweaty and grimy from trail dust, his performance reflects a vulnerability we’re not used to seeing. In one scene he rushes half-dressed into the night, awakened from sleep by an Indian attack. Shirtless and shouting orders, he seems a man caught off-guard in the confusion.

Finally, there is the surprise of his near-fatal injury in the final rescue of the children. He asks his son to pull the arrow from his chest, bravely wincing and not groaning and fainting as you or I would. But he arrives back at the fort, pulled on a travois rather than mounted, not beaten but bloodied for sure.

Wrapping up. I put this movie with the best of John Ford’s westerns. A project he apparently would not have done without the studio’s insistence, Ford directed this film with a great deal of care for the details. The performances are enjoyable; Wayne and O’Hara have plenty of chemistry; and the cinematography is often breathtaking. It’s a film that cries out to be seen on the big screen.

Rio Grande is currently available at netflix and amazon. For more of Tuesday’s Overlooked Movies jump on over to Todd Mason’s blog, Sweet Freedom.