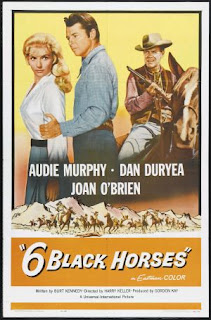 This western based on a Burt Kennedy script is a gem. A perfect vehicle for Audie Murphy. He gets to play a decent man, a cowpuncher down on his luck, who gets involved in a desert quest with a trail partner (Dan Duryea) and a blonde with money (Joan O’Brien).

Plot. O’Brien offers to pay the two men a grand each to take her across Apache territory to her husband in a border town. Much of the film is just the three of them riding together, two men and a woman. And Kennedy is a master at drawing out the sexual tensions that lurk under the surface in such a situation.

With Murphy as the point of view character, there are only hints that Duryea and O’Brien are not quite what they claim to be. For one thing, Duryea cannot get his mind off her gender. As she bathes in a mountain lake, he stands watch over her under things and observes that she gives him a “low down shiver.” Turning in for the evening, he offers to “spread her blankets.”

For her part, she suggests to Murphy that if he had both his and Duryea’s share of the money he could buy the ranch in Montana he wants. She seems to want Duryea done in. However, besides being too honorable to betray a friend, Murphy in fact owes Duryea for his life.

Meanwhile, there’s the threat posed by the Apaches. Like many novel twists of plot, Kennedy introduces the film’s Indians in an unconventional way. When a small band of them rides up to the three whites, it turns out that one of them wants to trade a horse for O’Brien. Murphy takes a careful look at the horse and then says, “No deal,” before the three of them race off.

No spoilers here, so no more of the plot. For the first-time viewer, the multi-layered suspense builds nicely, and it’s a pleasure being surprised by the well-paced revelations as they come.

Added value. There are the usual fistfights, ambushes, gunfire, chases, and a final gun duel. But it’s the many unexpected elements and the sharp dialogue that are evidence of an intelligent mind at work in the script. Right from the start, instead of the standard western opening of a lone horseman crossing a vast landscape, the film begins with a man on foot, carrying a saddle and blanket.

A closer shot reveals it is Murphy, his face damp with sweat as he stops to survey the desert terrain. After roping and saddling a beautiful black horse, he’s taken by some cowhands who accuse him of being a horse thief. They throw up a wagon tongue and set about hanging him.

Before progressing to the deed, one of them asks if he’ll “will” his gun belt and gun to one of them. It will prevent a dispute after he’s dead. It doesn’t much matter to Murphy, but he decides he’d like them to go to the youngest of the cowboys. “Thanks,” the cowboy says, surprised and pleased.

When Duryea frees Murphy at gunpoint, and he gets back his gun belt, the young man is sorely disappointed. In scene after scene, the film has moments like this, when Kennedy takes the situation in some direction you haven’t seen before in a western.


Character. Murphy does what he does well in front of the camera in this film. He looks good on a horse, rides easily, springs naturally into action, speaks his lines with conviction, and actually aims a gun before he fires it. You don’t get the idea that he’s trying to be anything different from what makes him most comfortable.

There’s a stoic quality about him that will accept a bad turn of luck without complaint. He’ll show a smile if there’s occasion for it, but there’s also a sadness beneath the surface. It’s being a man of his word and doing right by others that keeps him going, even if the future does not look promising. When Duryea asks him whether he doesn’t get tired of always being a good guy, Murphy tells him, “There are some things a man can’t ride around.”

Duryea’s character is drawn as a foil. By contrast with his easy attitudes toward women, Murphy is respectful and restrained. He had a woman once, he says, but she got tired of waiting for him. As the two men learn that O’Brien has had a less than sterling past, each uses what he knows about her differently.

Duryea uses it to excuse his own past. He has taken money to do the dirty work of other men, and he admits he’s always ridden away afterward, feeling “dead inside.” Murphy has only done honest work for honest pay, which is why he’s broke. He tells O’Brien that a man who truly loved her wouldn’t care about her past, and the kiss they exchange at that point gives away the feelings he’s been secretly harboring for her.

Wrapping up. Shot on location in St. George, Utah, the film’s cinematography captures interiors and exteriors in rich colors that are often expressively lighted. The setting sun on a distant bluff in one scene is nicely striking.

With a career as editor and director of numerous B-westerns in the 1940s and 50s, director Harry Keller is thoroughly at home with the material. He should be given credit for the obvious respect the film gives to the script and for the performances of his cast, which are natural, relaxed, and uncontrived. Cowboy star Bob Steele (later of TV’s F Troop) and character actor Phil Chambers show up briefly, Chambers as an undertaker.

For more of Tuesday’s Overlooked Films, click on over to Todd Mason’s blog.