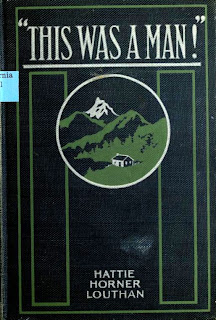 This is a western romance with all the stops pulled out as far as they’ll go. At 499 pages, the novel’s scale, its plot turns, and its emotional range could best be described as operatic. The romance it promises in the subtitle throws its arms around forbidden love, revenge, passion, illicit sex, alcoholism, rivalry, death, reversal of fortune, and babies switched at birth.

Not every early western is overtly organized around an argument, but this one is not only that. It takes up the old debate between Nature and nurture and sets out to show that the character of a man results from the influence of his environment. It ends by proving the opposite. Blood finally tells.

Plot. At the center of the story are a wealthy man, Pierce Eldruth, and his two grown children. We know from the start that one of them, Richard, was born out of wedlock to a low-class woman, Marah, who has worked as a servant to the family. But Eldruth claims to everyone that Richard is the child of his first wife, now deceased.

His second wife, also deceased, gave birth to a child as well, and to the very end of the novel we believe that child is the charming and delightful Lilys. Turns out, her real mother is Marah, the servant, who switched Lilys with the second wife’s newborn, another boy.

That boy, Paul, is “the man” of the book’s title. Growing up, he believes he is the child of Marah and a Mexican sheepherder on the estate, who was hanged by vigilantes shortly after fathering the girl Eldruth believes is his daughter.

While the son Richard, now in his twenties, lives a rake’s life of casual disregard for the consequences of his drinking and whoring, Paul is a model of responsible behavior. He works for Eldruth, rising to a high-level management position supervising the rich man’s many enterprises: mining, quarrying, cattle raising, haying, and timber.

From boyhood, he has also been a playmate of Lilys, and their long friendship has grown into a romantic attraction that each of them resists. There is the class boundary between them. Even she regards him as “not a gentleman” and therefore unfit as marriage material.

The ins and outs of this plot would keep us going for pages. But after many chapters, Lilys is drawn to Paul like a moth to the flame. She finally gets singed during a torrential rainstorm that drives the two to cover and some scarcely stifled passion is triggered between them. In time, she is willing to give up all for him, even to live as a workingman’s wife.

He is too honorable, however, to deprive her of her social standing and privileges. Having reached maturity, he resigns his job with Eldruth to build a fortune of his own as a partner in a gold mine. With his absence, the business of the estate begins to unravel. Paul saves the day, but not before Richard is shot and killed. This event precipitates the revealing of long-held secrets. Paul learns that he is Eldruth’s son and Lilys is Marah’s daughter. The two sweethearts are now free to marry each other.

Character. Eldruth has insisted all along that a true gentleman is the result of many generations of highborn forebears. While Paul exhibits all the character of a true gentleman, it’s supposedly in his blood to be as low-class as his parentage. While Richard exhibits not a single quality of character, his father regards him as the height of noble manhood. If nothing else, there’s his bloodline to prove it.

Louthan seems to be arguing the direct opposite. Paul has all the qualities Richard lacks. Chiefly he is hard-working, responsible, and respectful of others no matter who they are. There’s not a selfish bone in his body. Embittered at times by his lot in life, he stoically holds to Nature’s universal lesson: “What can’t be cured must be endured.”

In particular, there is his gallantry toward women. Always honorable, Paul represses his own feelings, suffer as he may without the solace of a woman’s affection. For Louthan, the rigid containment of sexual impulses turns out to be the true mark of a gentleman. So when everyone’s actual bloodline has been clarified, it turns out that Nature does in fact trump nurture.

Romance. Love across social boundaries shows up often as a theme in early westerns. Louthan gets plenty of mileage out of it in this novel, portraying romantic attraction as the slow buildup of pressure along a seismic fault line. Her lovers are storm-swept by emotions they are hard pressed to understand. Both are alone with feelings that cause them distress, feelings they should not have.

She gave a little exultant cry, flung back her head—and she was close-folded in his arms, the uplifted crimson of her mouth clinging to his. A moment of blinding rapture followed.

Richard’s presence in the novel gives Louthan opportunity to ramp up another kind of steam—all of it illicit. Several racy scenes show him seducing working-class girls who are only too happy to dally with him. He also insists, without success, that his proper and respectable fiancée, Nina, yield to his amorous advances before their marriage.

The irony at the end is that true love overcomes social boundaries only when fortunes have been reversed. Now the single heir of the Eldruth name and the family estate, Paul is able to grant Lilys all she desires—his handsome self and all the privileges she’s ever known. Louthan ignores the fact that she’s the offspring of a servant woman and a Spanish-speaking outlaw. She wins big and doesn’t have to give up a thing. It’s exactly the kind of romance that readers pay money for.

Wrapping up. Hattie Horner Louthan (b. 1865), from White Water, Kansas, worked in Denver as an editor and journalist. Besides fiction, she wrote verse and textbooks and also taught English at the University of Denver. The Louthan Book Company was owned by her husband’s family. According to J. Frank Dobie, she may have contributed as a ghostwriter to Tom Horn’s autobiography, Life of Tom Horn. One later novel, A Rocky Mountain Feud (1910), was also set in Colorado.

This Was a Man! is currently available for the nook. It also can be found online at google books, Internet Archive, Hathi Trust Digital Library, and Open Library. For more of Friday’s Forgotten Books, click on over to Patti Abbott’s blog.