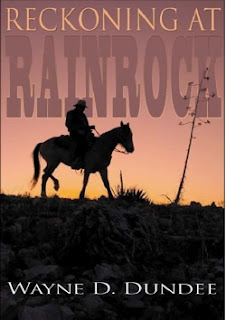 Wayne Dundee writes westerns faster than I can read them. Reckoning at Rainrock was published earlier this year, not long after Manhunter’s Mountain, and already there’s another one out, Rio Matanza.

Reckoning is a Lone McGantry novel, a follow-up to last year’s Dismal River, both set in 1880s Nebraska. It tells a neatly crafted story with multiple characters who become involved in the fortunes of a woman convicted of the killing of her father.

Plot. Like a private eye novel—a form of fiction Dundee also practices—the story kicks off with a visit by an attractive female with a problem she wants the hero to solve. In this case, the female is a lawyer, Harriet Munro, and her problem is a missing client, Roxanne Purdom Bigbee. She’s not exactly missing, but held captive by what could be called human traffickers. She’s being kept across the line in Julesburg, Colorado, as a sex-worker in a bucket-of-blood saloon.

McGantry retrieves her, and because she’s a fugitive from justice, collects a reward for her capture. The lady lawyer has new evidence, and her plan is to get a retrial with a new judge. She expects the judge to reverse the guilty verdict and the sentence of death by hanging handed down at the previous trial.

Turns out there are too many people in town with too much to lose if that happens. Roxanne gets sprung from jail by an interested party, and the rest of the novel is a pursuit by posse—and others, including McGantry—into the Toadstool badlands of the Nebraska panhandle.

Storytelling. For me, part of the enjoyment of westerns is seeing the way different western writers go about telling their stories. As a reader, you’re familiar with the western franchise, but the ways of marshaling its rich material are infinite. Stories set in some previous period of history are also interesting for what they say about the time when they were written. The past is made familiar and less remote by recasting it in terms of the present.

Dundee is free to disagree with me about this, but about a third of the way into this novel, I realized that it reminded me a lot of TV westerns like Gunsmoke and Bonanza. Like the continuing characters in those westerns, Dundee’s people talk a lot. The scene is often of two people in friendly conversation, and the plot moves forward as they discuss the past, present, and future.

And the talk is that smoothly even-tempered, lightly humorous manner of casual conversation that TV writers put into the mouths of their characters. It’s familiar to the ear, modern-sounding for the way it fills a social space. You don’t notice that modernisms creep in, as they do when Dundee’s characters talk. Somehow the word “coldcock” rings true, even though a slang dictionary says it was not in use in the 1880s.

The values in the novel are also modern ones. Julia Roberts can sympathetically play a prostitute in a movie today, and an audience is not puzzled or appalled as it would have been in the Victorian 1880s. Sting can sing of his own “Roxanne,” and in both cases what we get is romantic and palatable. So Dundee’s Roxanne glides easily into a modern reader’s imagination.

McGantry. Dundee’s central character Lone McGantry is something of a loner, comfortable with being alone and, like many western heroes, on his own from an early age. All the same, he is gallant and chivalrous, comfortable in the company of a respectable, educated woman.

Still, beneath his calm surface, you sense that he harbors a cauldron of cold rage. His rescue of Roxanne from the saloon is precise and methodical, and the deaths of those who stand in his way are sudden and brutal. Stopping at a relay station on a stagecoach line, he takes exception to a cowboy’s salacious remarks about Roxanne and gets into a fight. Rudely interrupted by a local rancher during a pleasant meal with lawyer Munro, he leaps instantly to her defense, ready to draw his gun, though they’re in a hotel dining room.

He is a fierce protector of women’s honor. When he himself is sexually stirred by the sleeping Roxanne while camping with her on the trail, he berates himself for his urges. When she makes clear that she’d happily give him a roll in the hay, he backs off, shunning anything that might remotely suggest a romantic entanglement.

Women. Actually, the women in the novel call most of the shots. Lawyer Munro chooses and hires McGantry to do a job she has for him, and he remains in her service to the end. Roxanne is strong and independent, seemingly untouched by abuse during her childhood and by a career choice as a prostitute in a rough cowboy saloon.

A Mexican woman married to the white foreman of a big ranch is a regular Lady Macbeth. She has greedy schemes for her own self-advancement that respect no one. The proprietress of the saloon in Julesburg is a mighty fortress of a woman, who can only be subdued by being bludgeoned to death. The rich widow of a dead rancher has a banker around her finger, even while she is a hopeless alcoholic.

The men, by comparison, tend to knuckle under. They put themselves on the line and aren’t exactly repaid for their efforts. One is cuckolded. Two are killed who would have stayed alive had they not got mixed up with the problematic Roxanne.

Character. Dundee keeps McGantry as an opaque presence in the story. We know we can count on him for fearless action. He’s not afraid to kill, and is untouched by killing. But besides being called a “scout,” we learn little about him. We are almost never privy to his thoughts or feelings.

The deputy sheriff Turk Ridgeway makes in interesting contrast. He starts out barely competent as a law officer and plagued by self-doubt. Lacking the full respect of other townsmen, he struggles gamely when the sheriff’s duties are suddenly thrust upon him.

Dundee takes us on a long journey with Ridgeway as he leads a search party out into the wilds of the Nebraska panhandle. Out there, he takes counsel in the thoughtful advice of a one-armed veteran of the Civil War. And he grows as a man. Though a journey by horseback across a forlorn, wintry landscape, it’s also an interior journey. We know what the man is thinking and feeling all the way.

Maybe because McGantry is already a finished man, and maybe because Dundee prefers to create an air of mystery about him, we don’t get that kind of insight. So Ridgeway ends up a more three-dimensional character, and McGantry is flatter by comparison.

I’m not saying that’s wrong, just different. It may make more plausible the kind of hyper-violence we get in the early chapters when McGantry subdues the three grotesque characters who keep Roxanne prisoner at the saloon in Julesburg. It takes a kind of super hero for that sort of death-dealing action.

Villainy. I’d also argue that the emotional tone of much of the novel is a reflection of the times we live in. Especially through the first half of the novel, characters are often motivated by nothing more than sheer contempt. The trio of characters that keep Roxanne hostage are soulless, inhuman people—in a word, contemptible— and they deserve the brain-spattering end McGantry provides for them.

The cowboys in the roadhouse, who want sex with Roxanne, are unapologetic in their contempt for her as a prostitute. The enraged rancher in the hotel dining room is openly contemptuous of the lady lawyer, an outsider who’s come to make trouble in his town.

Later in the novel, villains are motivated by more old-fashioned emotions—greed and fear. And we’re on more familiar ground. But it’s not a stretch to say that we live today in an age in which contempt is freely expressed on radio and TV, and simply for people of another political party, religion, sexual preference, or color. In that regard, Dundee’s novel truly keys into the current zeitgeist.

Wrapping up. That’s enough, and enough is too much. Let it be said that there’s a whole lot going on in this novel that makes it fascinating to read. I encourage readers to find Dundee’s westerns, if they haven’t already. And I have only one caveat—brace yourself for some rough passages. He doesn’t pull punches.

Reckoning at Rainrock is currently available at amazon and Barnes&Noble. For a review and interview with Wayne Dundee about his previous novel Manhunter’s Mountain, go here. For his blog, go here, and for his bio at Smashwords go here.