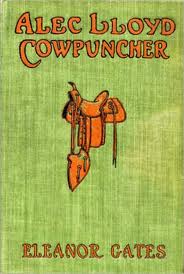 This is a collection of stories loosely strung together about an Oklahoma cowboy with romance on his mind. Known to one and all as “Cupid” Lloyd, he likes to match up folks he thinks would make good couples. A matchmaking cowboy is an odd premise for a book of fiction, but given Lloyd’s lack of prospects for marriage himself, there is poignance in his situation and potential for serio-comic developments.

Plot. As one example, he volunteers his assistance to a local doctor, Billy Trowbridge, who is sweet on a young widow, Rose Andrews. However, Billy doesn’t pass muster with Rose’s father, as he rides a bicycle and lacks the glamour of another doc in town, Simpson, who drives a horseless carriage. Simpson also practices an updated brand of medicine, which attributes the cause of illness to “bugs” (bacteria and viruses).

When Rose’s baby falls ill with a number of complaints, Simpson makes daily house calls to discern the “bug” that may be at fault. Suspecting that he’s also making a play for the widow’s affections, Alec takes matters into his own hands. He disables Simpson’s vehicle by causing it to go off the road and into a tree, giving Billy a chance to doctor the baby himself.

He discovers that the poor thing is simply cutting teeth—four of them at once—and quickly brings the baby and everyone else some relief. He also effectively cancels Simpson’s credibility. Asked for his bill for services, Billy requests the hand of Rose in marriage, and the two are soon headed for the altar.

Romance. The women in the novel are seen through the eyes of Alec, a traditionalist about gender roles. They are independent and confident in their abilities to look after themselves without the supervision of males. Alec likes Rose's sister Macie, who has spunk, but he disapproves of what she does with it. At a schoolhouse dance, when she dances with the wrong man, Alec puts his foot down and tries to take her home to show who’s boss.

This, of course, backfires. As soon as she gets a chance, she leaves her father’s ranch and begins supporting herself, waiting tables and keeping a storekeeper's books. When a dying man leaves her $500, she decides to go to New  York and pursue a singing career. Alec eventually finds her there and he’s lucky enough to persuade her to return. They marry, but only after she’s proved that she can make it on her own in what the men believe is a man’s world.

Style. The story is told in first person, and Alec’s storytelling is thick with cowboyisms. There’s the occasional malapropism, as when Alec routinely uses the word “erection” for “direction.” The reader is often referred to with “yas, ma’am” and “no, ma’am.”

Mebbe you figger that Mrs. Bridger drawed a knife and sa-a-aved him, ’r I pulled my gun and stood there, tellin’ ’em they’d only hang the sheriff over my dead body. But that ain’t the way it happened. No, ma’am.

The word “chaps” is spelled “shaps” to indicate actual cowboy pronunciation. Alec is rarely moved to description for its own sake, but he can sum up the look of a character with sharply observed details, as he does here:

Hank is a terrible tall feller, and thin as a ramrod. He’s got hair you could flag a train with, and a face as speckled as a turkey aig. And when I come on to him that day, here he was, stretched out on the floor of Dutchy’s back room, mouth wide open, and snorin’ like a rip-saw.

Social history. One chapter is devoted to the visit of a patent medicine show, which comes to town for a week. For sale are five patent medicines, said to be derived from formulas learned from Blackfoot Indians by a boy taken captive after the massacre of his family. Two dollars buy all five, plus 10 votes to cast for the prettiest girl in town and 10 for the homeliest man.

A competition quickly ensues between the cowboys, in support of Alec’s sweetheart Macie, and the railroad men, who favor a waitress, Molly Brown. Alec drums up the votes for Macie, who edges out Mollie Brown and brings a round of cheers from the cowboys. Then Alec learns that he’s won “homeliest man in town” in a landslide.

Wrapping up. Born in Minnesota, growing up in Dakota Territory, and university educated in California, Eleanor Gates (1875-1951) is remembered today chiefly as a Broadway playwright. Her best-known work, The Poor Little Rich Girl, was first staged in 1913. Its story became a film vehicle for Mary Pickford in 1917. First published as Cupid, the Cowpunch (1907), her collection of Alec Lloyd stories was adapted to a feature film in 1920 with Will Rogers in the starring role.

Her autobiographical novel, The Biography of a Prairie Girl (1902), and another novel, The Plow-Woman (1907), were based on her childhood years in Dakota. FictionMags Index finds her the author of numerous short stories, serials, and a few novels published in mostly slick magazines from 1902-1925.

Cupid, the Cowpunch is currently available online at google books. Alec Lloyd, Cowpuncher can be found at Internet Archive and is also available for kindle and the nook. For more of Friday’s Forgotten Books, click over to Patti Abbott’s blog.
Sources:
The Publishers’ Weekly, January 21, 1922
Richard Abel, editor, Silent Film, 1996
FictionMags Index

Coming up: Edgar Beecher Bronson, Reminiscences of a Ranchman (1908)