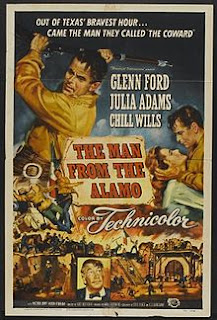 This is another of those 1950s westerns with a hero who wrongly becomes a social outcast. Glenn Ford plays the role this time. Defending the Alamo, he’s a married man who draws lots with several others like himself for one of them to go look to the welfare of their families. His departure is misinterpreted as an act of cowardice, and the rest of the film portrays his attempts to recover his good name.

Plot. Discovering that he’s too late to save anyone’s family or household, including his own, he is told by a Mexican boy (Marc Cavell) that the villains were not Mexican soldiers. They were a gang of gringo guerillas.

But coming into a town, in search of someone to take in the orphaned Cavell, Ford is identified by a lieutenant in Sam Houston’s service (Hugh O’Brian) as a deserter from the Alamo. The townsfolk, including a one-armed Chill Wills, throw him in jail where he happens to share a cell with one of the gang that killed his family (Neville Brand).

Orders arrive for the women and children to evacuate the town, leaving only the able-bodied men behind to defend it. They are, however, more interested in lynching Ford. When the gang engineers a jailbreak for Brand, Ford goes along with them, though none of them trusts him either.

The rest of the film follows the wagon train of women and children under escort of O’Brian and his troops. Transporting the bank’s deposits in one of the wagons, they become a target for the gang who plan an ambush. Ford foils the plan by warning the approaching wagon train with a gunshot, but he ends up at the bottom of a cliff, as good as dead.

Cavell, traveling with the town’s schoolteacher (Julie Adams) retrieves Ford. She, with the help of Wills, brings him back to life. The wagon train proceeds without further problem until O’Brian and his men receive orders to report for duty elsewhere. His family is on one of the wagons, and at first he refuses to leave them—which would make him a deserter like Ford, and for the same reason. How the tables turn.

He finally agrees to leave Ford in command of the wagon train. With rifles in the hands of all the women and a revolver in Wills’ one good hand, they not only repel the gang. They wipe them out completely. Ford dispatches the gang’s leader (Victor Jory) in a fierce fistfight on the brink of a precipitous waterfall.

Now exonerated, Ford heads for San Jacinto, where he will join the fight for Texas independence. As he leaves, Cavell assures Adams that Ford will be back some day, which seems to please her.

Character. Casting Glenn Ford as a wronged man doesn’t work very well. He looks hurt, angry, and sullen all the time, which makes his performance almost inert. It’s hard to identify with him. Ford certainly was a versatile actor. Maybe the problem was with the direction.

There’s a contrivance in the plot that works against him as well. He never explains to anyone the real reason for his departure from the Alamo, so it’s easy for others to assume he’s a coward. You keep wondering, what’s keeping him from telling someone the truth? “They wouldn’t believe me,” he says at one point, but that’s not very convincing.

The script suggests an angle that might have been made more of—that in drawing lots, Ford was the unlucky one, having to give up the chance to die with honor. The rest of the movie would then make sense as a long stretch of even more bad luck.

If that’s what director Budd Boetticher had in mind, it’s not an idea that comes across very clearly. Boetticher was excellent with small casts and drawing out dramatic complexities like this. The problem may lie with the large cast and the scale of this film, which is more epic than standard western.

History. The opening sequence puts us at the Alamo in 1836 during the bombardment. The brave defenders are represented by Jim Bowie, who lies in bed having fallen to illness. Davy Crockett is recognizable in coonskin cap, his memory rejuvenated in 1953 with his TV portrayal by Fess Parker and Walt Disney.

Legend has it that one man did choose to leave rather than defend the fort, and that may well be the source of the story for the film.

Wrapping up. The screenwriters, Steve Fisher and D.D. Beauchamp, had long careers in film and TV. Beauchamp wrote numerous westerns and episodes for the TV series, Daniel Boone (1965-1969). Actor Hugh O’Brian would go on to appear in the title role of the TV series, The Life and Legend of Wyatt Earp (1955-1961). Shot in color and standard ratio, the film used exterior locations in Thousand Oaks, California.

The Man From the Alamo is currently available at amazon and netflix. For more of Tuesday’s Overlooked Movies, head on over to Todd Mason’t blog.