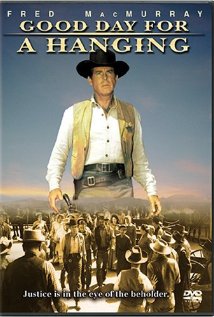 You don’t think westerns when you think of Fred MacMurray, but he was a versatile actor and equally at home in just about any kind of role. Here he plays a character found in other 1950s westerns, a lawman alone against a town that has lost faith in him.

Plot. It’s 1878 in a small Nebraska town. A bank holdup in the opening scenes leads to a chase in which the town marshal is killed and a young member of the gang (Robert Vaughan) is captured. In need of a new marshal, the town fathers persuade MacMurray to wear the badge and see that justice is done.

The rest of the film turns on the courtroom testimony of the one witness (MacMurray) who remembers clearly that it was Vaughan who shot the marshal. Though first outraged at the loss of a well-loved public servant, the town’s opinion shifts when a skillful defense lawyer with political ambitions appeals to their sympathies. The young lad, he reminds folks, had a deprived childhood and was obviously not a hardened criminal.

There’s also the fact that MacMurray’s daughter (Joan Blackman) is sweet on Vaughan. She brings him food baskets and TLC despite her father’s disapproval. Townspeople begin to suspect that this development may color MacMurray’s judgment and his memory of the shootout. Even the widow (Maggie Hayes) MacMurray is to marry turns against him and calls off their wedding.

The trial jury reluctantly finds Vaughan guilty, and a gallows is constructed outside the jail. Meanwhile, the whole town signs a petition for clemency to be delivered to the state governor. Only Hayes’ young son sticks by MacMurray and praises him for his courage. The widow of the dead marshal also counsels him to stay true to himself and do what he believes is right, though it may alienate everyone.

Script. The film was adapted by veteran screenwriter Daniel B. Ullman from a story by prolific western writer John Reese (1910-1981). Without finding the original story (title unknown), it’s hard to say who gets credit for the sharp plotting and the moral complexity. The dilemma in which MacMurray finds himself is cleverly constructed.

We are also left in doubt until the end about the degree of Vaughan’s guilt—if there's any at all. Exasperating, unless you’re watching on DVD and can replay the scene, is that being witnesses ourselves to the killing of the marshal, we’re not likely to recollect exactly how it all happened. I sure couldn’t.

Like High Noon, this is a western that takes place mostly indoors and in the streets of a small town. The opening scene finds a stagecoach being observed from a distance by several men on horseback, and you expect the usual holdup, but they ride off instead. It’s the first clue that the film is not going to be entirely conventional.

The personal drama is heightened at points by the obligatory gunfire, a chase, a fistfight, and the final shootout. We also get the usual scene in which a woman pleads with the main character to see reason and forego the heroics. The strength of the film, though, is the way it portrays MacMurray’s growing dilemma.


Character. It’s not a matter of kill or be killed, as in High Noon, although in the shootout at the end that’s definitely an issue. What holds our interest is wanting MacMurray to do the right thing, while knowing that he could be unjustly sending a young man to the gallows.

So the story is about strength of character in a world where no choice is an easy one. For the widow’s young son, it’s a black and white world and you just have to stick to your guns. For the marshal’s widow, there are many shades of gray, and you do the best you can with what you’ve got. The prosecuting attorney (Wendell Holmes) reveals that his work has contributed to what looks like a severe drinking problem. The pieces of the puzzle all fit together very nicely.

Performances. There are numerous pleasures in this film for 1950s western fans. MacMurray has the necessary physical presence and the firmly patient voice to be persuasive in his role. His perfectly ordinary face also makes him an everyman easy to identify with.

The young Vaughan (long before The Man From U.N.C.L.E.) has those soulful eyes but an easy sneer that makes you doubt his sincerity. He’s perfect for the part, especially when he tearfully pleads for his life at his trial.

A wonderful surprise is Kathryn Card as the marshal’s widow. Screenwriter Ullman gives her a scene with the body of her husband, being returned to town across the back of a horse. Her tenderly calm expression of grief conveys a long acceptance that the day might come when he’d die in the line of duty. Her scene with MacMurray, when he comes to her for advice, is also well played with both warmth and gravity.

Wrapping up. For a film that may be unknown even to western fans, Good Day for a Hanging brought together a truckload of talented people. Several character actors with long screen careers were cast in supporting roles: Denver Pyle, Phil Chambers, Howard McNear. Margaret Hayes had a long screen career with many TV roles. James Drury, looking nondescript without his black Virginian hat, plays the town doctor.

Direction was provided by Austrian-born Nathan Juran, whose early career included Audie Murphy westerns, Gunsmoke (1953), Tumbleweed (1953), and Drums Across the River (1954). Later he would direct many episodes of the TV series, Daniel Boone (1965-1970). Shot in color and widescreen, the film has a stock music score that sometimes makes use of George Dunning's theme for 3:10 to Yuma (1957).

Good Day for a Hanging is currently available at netflix and amazon. For more of Tuesday’s Overlooked Movies, head on over to Todd Mason’s blog. A BITS review for another Fred MacMurray western, Face of a Fugitive (1959), can be found here.