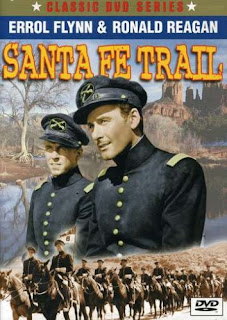 You can sense the lingering images of Gone With the Wind (1939) on movie screens when this film was released in 1940. With its Southern sympathies, it has much of the same view of Civil War era history. Though shot in black and white, the scale of many scenes, the size of the cast, and especially the appearance of Olivia De Havilland in a full antebellum dress, also bring that earlier film to mind.

Plot. Its opening scenes set in 1854, the film introduces us to its central characters, J.E.B. Stuart (Errol Flynn) and George Armstrong Custer (Ronald Reagan). De Havilland is with a contingent from Kansas at their West Point graduation ceremonies. In a secondary role is Van Heflin, expelled from the academy for distributing anti-slavery literature in the cadets’ quarters. A monumental presence in the film is Raymond Massey’s stormy and apparently mad abolitionist, John Brown.

The characters all converge in Bleeding Kansas as pro- and anti-slavery forces take up arms against each other. Heflin, we learn, has become a strategic military advisor to Massey. But before engaging Massey’s army of volunteers, best friends Flynn and Reagan amicably woo de Havilland. Her father is a Kansas merchant with a vision of building a railroad from Fort Leavenworth to Santa Fe.

Flynn, wearing a handsome black hat, is taken captive by Massey and escapes both hanging and a burning barn before being rescued by the cavalry, with Reagan in command. Defeated, Massey and his followers are driven from Kansas, only to turn up again at Harper’s Ferry.

Disenchanted with Massey, Heflin goes to Washington to reveal the man’s plans to incite a slave rebellion. Flynn and Reagan lead the charge that lays siege at Harper’s Ferry and take Massey captive. He is eventually hanged. Meanwhile, tracks for the new railroad are being laid along the Santa Fe Trail and de Havilland has decided it is Flynn she wants for a husband. The disappointed Reagan is quickly introduced to a fetching blonde who turns out to be the daughter of Jefferson Davis.

History vs. bunk. The portrayal of J.E.B. “Jeb” Stuart comes fairly close to actual history. Stuart, who was later to be a Confederate general, did graduate from West Point in 1854, in time to receive a commission that put him in Kansas during John Brown’s tenure there.

As an officer in the military, Stuart was called upon to support the pro-slavery government of the Territory and to help quell the growing violence and bloodshed. In a whirlwind courtship, he also met and married Flora Cooke, the daughter of a lieutenant colonel.

The specifics of John Brown’s activities in Kansas are probably manufactured. But his portrayal as a fiery, Scripture-quoting domestic terrorist squares with the estimation of some, though not all, historians. His capture and attempted hanging of Stuart is an invention by the screenwriter.

Ronald Reagan’s George Custer is more of a fabrication. Custer was still at West Point during John Brown’s crusade and graduated with the rest of his class, a year early, when the Civil War broke out in 1861. Reagan’s big grin gives Custer more the manner of a good-time fraternity bloke, although from what we know of the man’s career as a cadet, that’s probably not too far off the mark.

Implications. The pro-South bias of the film doesn’t make it a Birth of a Nation, but there are moments that have an odd ring to them. Flynn says more than once that the slave states should be left to work out their own future with no interference from outsiders. When the outsiders are cast as murderous followers of the Rasputin-bearded John Brown, and there’s little mention of equally militant slavery advocates, you have to wonder.

A handful of black actors get lines now and then in the script. Traveling on the Underground Railroad, they can be heard lamenting the realities of being free men. One complains about having to look after himself now and wishes he could go back to the plantation where he didn’t have to worry about food and shelter. Meanwhile, as an out-spoken abolitionist, Heflin loses faith in Brown’s cause and ends up being killed.

As for the Santa Fe Railroad, the film does give proper credit to entrepreneur Cyrus Holliday (Henry O’Neill). He had a daughter named Lillie, who may or may not have borne a resemblance to Olivia de Havilland’s “Kit Carson” Holliday. The railroad, however, was not built until after the Civil War, and Lillie Holliday did not marry J.E.B. Stuart.

Wrapping up. Hungarian-born director Michael Curtiz brought this epic-size historical drama to the screen. In a career that spanned 50 years behind the camera, Curtiz is remembered for classics in nearly every movie genre, from Casablanca (1942) to Yankee Doodle Dandy (1942). Action sequences, including a fistfight in the opening minutes, crowd scenes, a barn burning, gunfights, rescues, and chases are well executed.

Santa Fe Trail (curiously named since little of the film has anything to do with the Santa Fe Trail) is currently available at netflix and amazon. For more of Tuesday’s Overlooked Movies, click on over to Todd Mason’s blog.