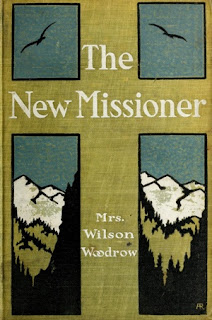 This mining camp novel recounts the domestic affairs of several women living in a small mountain community in Colorado. They are miners’ wives, thoroughly obsessed with town gossip, much of which they originate themselves. The “new missioner” of the title is a newcomer, sent by the bishop to fill a local pulpit. That she is a woman causes no small stir among the miners’ wives who style themselves as the “Ladies Aid Society.”

Plot. The novel is more episodic than it is unified along a single plotline. For overall continuity, it follows the events of one year, from winter through spring and summer to autumn. During that time, Frances Benton, the new missioner, passes through a series of revelations about herself.

Frances is a mostly non-judgmental observer of the carry-on in Zenith, the mining camp that is home for the novel’s collection of characters. Her mission there is to “help people,” which she comes to realize is easy to affirm in the abstract but not so easy to put into practice.

As in a soap opera, incidents blossom into conflicts, there’s a great deal of talk about it all, the crisis passes, and a degree of calm returns. Among the disturbances that erupt during the year, there’s the matter of Mrs. O’Brien’s too casual relations with the men in the village. While her husband is off working at the mine, she’s working her flower garden, where she can be chatted up by any passing male.

Then there’s Lutie, the female companion of the richest man in town, the silver mine owner Walt Garvin. Lutie is dying of a wasting disease, apparently TB, and he indulges her every material whim in hopes of brightening her last days. The ladies of the Ladies Aid take exception, for the fact that Lutie and Walt are unmarried.

Lutie’s death is followed by another upset when, Mrs. Nitschkan, one of the ladies of the Ladies Aid, happily leaves her family to go on a two-month fishing and hunting excursion. Her friends are aggrieved by this excess of self-indulgence.

Women. Woodrow treats her “Ladies” kindly, but has little real sympathy for them. They are comic figures. For all the women in the novel, one issue dominates the ins and outs of daily life. In one instance after another, Woodrow portrays marriage for them as a mixed blessing. A husband is a necessary nuisance, but the trade-off is the loss of a woman’s independence.

Mrs. Evans raises eyebrows when she leaves her husband to take a job as stage driver between Zenith and the nearest train depot. As a beleaguered wife, she appreciates the freedom that the extra income gives her. But when her husband is shamed by her self-employment and agrees to terms for her return, she is glad to give up the job.

Mrs. Thomas loses her husband to “miner’s consumption,” and soothes her short-lived grief by puzzling over how to spend the life insurance. She settles finally on making some home improvements. But there’s a wave of shock when she takes up company with a psychic and self-styled professor. Even Frances berates the woman for rushing into marriage so soon after her husband’s death.

Romance. A love story begins to emerge in the later chapters as the wealthy Mr. Garvin takes an interest in Frances, the missioner. She becomes troubled as she realizes she is falling in love with the man. She begins to feel “womanly,” and therefore out of control.


Emotions well up unexpectedly, both in raptures and in agonies as she is swept along by them. A life of wealth and comfort, in the company of a tenderhearted, intelligent man, is a dream she has never entertained before.

In the end, however, she realizes that marriage would mean giving up her calling. And she has learned that her calling is not to help people but to simply love them. In that altruistic love is the reality of a life lived to the fullest. Mere romantic love pales by comparison.

Style. Woodrow writes in a versatile range of styles from light humor to the poetic. Some plot developments are related tongue in cheek, using an elevated tone to describe small matters. Noting the low turnout at church services, she observes: “The inhabitants of Zenith were not wont to take the keen edge off the pleasure of church attendance by a too frequent indulgence in its privileges.”

Woodrow shows less interest in realistic description. She makes only the occasional observation of living conditions in Zenith. Renting a room at the Thorn House Inn, Frances soon discovers that she has no privacy. The walls are so thin they let tobacco smoke through. Zenith itself lacks any civic charms. It is a place of “straggling, unpainted cabins, yards adorned with tin cans, broken crockery, and stray bits of wire.”

Wrapping up. Born in Ohio, the daughter of a physician, Nancy Mann Waddell Woodrow (1870-1935) began a newspaper career in 1896 for Chillicothe Daily News. After her marriage, she lived in Colorado, where she acquired material for her mining camp stories.

Her fiction was published under her married name, Mrs. Wilson Woodrow. Her husband was a cousin of the 28th U.S. president. In a 1917 interview, she claimed a former president of Princeton as a forebear and traced her ancestry back to the American Revolution.

She was the author of numerous novels. The New Missioner first appeared as a short story in McClure’s in 1904. It was one of the first of over 50 works of short fiction and serials that appeared in mostly slick magazines over a period of 25 years. In the 1920s, she introduced a detective, Heywood Achison, featured in seven stories, all but one of them published in The Detective Magazine.

The New Missioner is currently available at google books, Internet Archive, and Open Library, and for the nook. For more of Friday’s Forgotten Books, click over to Todd Mason’s blog.