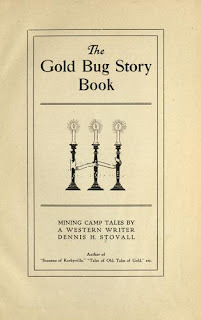 This collection of 13 short stories is a modest celebration of miners' lives. They’re set in a fictional mining camp called Gold Bug, in the mountains 40 miles from Boulder. While there are references to Colorado, Stovall says in his preface that they might just as well have taken place in California or Nevada.

He dedicates the book to the army of western miners, whom he describes as “soldiers of honest toil.” The stories saw print previously in The Daily Mining Record, published in Denver, Colorado, 1893-1913.

Setting. They take place almost entirely within the confines of the camp. Stovall takes us down the mine, which extends on several levels many hundreds of feet beneath the surface. The references to machinery, the various jobs the men perform, and the overall operation of extraction are not explained for the novice reader. The primary intended audience seems to be miners like the characters in the stories and mining enthusiasts.

The action of several stories occurs in the Dewdrop Saloon, which is the social center of the camp. On a typical night, a few men play poker and faro, and others listen to the old-timers’ stories. The men’s only connection with the outside world is the stagecoach, which travels daily to and from Boulder and has a driver, Slivers, usually well oiled with whiskey.

There is a boarding house where the men sleep in bunks. It is run by an Old Woman, called Aunt Mollie, who also cooks meals for them. The crushing mill runs day and night, maintaining a constant noise level. The rare miner with a wife lives with her in a small cabin out of earshot of the ribaldry in the saloon and beyond the range of the occasional high-spirited gunshot.

Character. Almost to a man, the miners are decent and hardworking. The ones with true grit are brave and capable of unflinching heroism as they battle fires and cave-ins. In “The Gold Bug Kid,” Hudson, the superintendent, hires a new young employee, Sam Jimpson. The boy proves his worth to everyone but the foreman Jackson, who is well known for hating women and kids.

On a fateful night, the underground pump station catches fire, and the three of them work against all odds to put it out. When the kid is injured by falling timber, Jackson admits that he’s underestimated the boy, begs to be forgiven, and sheds a tear.

Weakness of character is illustrated in the story “When the Plunger Quit.” The plunger of the title is Mark Blevins, a young man who arrives in Gold Bug on the same stage with a brother and sister, Dick and Lucy. Dick is a ne’er do well who squanders his money in gambling with Blevins, who intends to return his winnings but is too late to prevent Dick from committing suicide.

Villainy. Occasionally a man with a shady past finds work in Gold Bug, and the mean streak in him is revealed. In “The ‘Dare Devil’” a hold-up man in red wig and mask regularly robs the passengers of the stagecoach. As long as he leaves the U.S. mail untouched, the stage driver makes no effort to stop him. Theft is simply part of the cost of living in the West.

Red Head, as the thief is known, is discovered to be one of the miners, going by the name of Buck Tyson. Not only that. Harry Fields, son of the general manager, remembers him as a bully from his school days. Tyson denies he’s the same person but starts taking pot shots at Fields, finally challenging him to a fight during a dance at a nearby camp. Though he draws a knife on Fields, Tyson gets soundly beaten.

Women. The fair sex tends to have a civilizing effect on the camp. Lola Langhorn, a dentist who arrives by coach one day, sets up a practice. The miners take a sudden interest in oral hygiene and keep her quite busy. Meanwhile, preaching temperance to them, she has the men abstaining from alcohol so thoroughly that the Dewdrop nearly goes out of business.

In time, the miners trust her to provide a home for their safe, in which they keep their savings. But her intentions are not all they seem. The Sunday finally comes when she fails to make an appearance for one of her temperance sermons. And the men discover that she has picked the lock on the safe and absconded with all the contents.


Romance. Many of the stories involve romance with a pretty young woman who shows up at the camp and stirs up the female-deprived men. In “Millie and the Thoroughbred,” it is the boss’s daughter who arrives from San Francisco. The superintendent, Hudson, woos her with gifts and flowers, but she prefers Jim Nason, the only man in camp with a boiled shirt.

Hudson is a decent enough man, but he has a history of being politely spurned by the opposite sex, which he is getting weary of. A dangerous cave-in deep in the mine finds Hudson and Nason heroically working side by side. Almost fatally injured, Nason is nursed back to health by Millie. With a new respect for Nason, Hudson makes him a foreman and stands aside for Millie and Nason to marry.

Style. Stovall’s storytelling is simple, uncluttered, and straightforward. There is a clarity sometimes in his imagery that nicely captures a moment and there are moments of wry humor. Where there is excitement, the pace is hard driving. Here, in “The Tin Horn of Gold Bug,” a battle rages underground to save the mine from a cave-in.

A dozen diggers were jamming in the timbers, working madly in the candle-light. Back under the maw of the break, were Simpson and Jerry. The whole mountain trembled, and the great stulls groaned and cracked.

Wrapping up. Stovall (d. 1941) seems chiefly to have been a magazine writer for mining industry journals. He also published articles on travel and hunting in Oregon, with fiction and poetry as a sideline. A novel set on the frontier of southern Oregon, Suzanne of Kerbyville, was published in 1904. Another Gold Bug story, “Because of Mazie,” appeared in Bret Harte’s Overland Monthly (November, 1912). In the 1910s he was selling stories and novels to Street & Smith’s Top-Notch magazine.

The Gold Bug Story Book is currently available online at Internet Archive and for the nook. For more of Friday’s Forgotten Books, click on over to Patti Abbott’s blog.

Image credits: Illustrations from the first edition of the book, illustrator unidentified