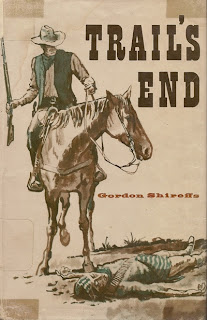 The journey into Mexico is a frequent storyline used in western fiction. Its origins no doubt go back to mythology and stories like Orpheus’ trip into Hades. Countless examples exist from Dante’s Inferno to Cormac McCarthy’s All the Pretty Horses. Mexico is a land of death and danger, a dark terrain like a nightmare that won’t let the dreamer wake up.

Mexico in western fiction is a proving ground and a right of passage. There, without the protection of the law, a man survives by his wits and his weapons. More so than in the Wild West north of the border, he is truly on his own. As the Mexican police detective says in answer to Sean Penn’s protests in The Falcon and the Snowman, “This is not America.”

Plot. Trail’s End by Gordon Shireffs (1914-1996) takes its central character, Clint Buell, into that same world. Not quite in pursuit of a kidnapped lover, he’s looking for a younger brother once stolen by Apaches. While twelve years have passed and everyone tells him the boy is surely dead, he will not be satisfied until he knows for sure.

His journey takes him from Texas to New Mexico to Tombstone. Finding men who still remember the bad old days of the Indian Wars, he determines that his brother was taken by an Apache chief, Coletto Amarillo. That band of Indians now inhabits a forbidding region in the deserts of Sonora.

But an obstacle prevents Buell from finding the chief, who can tell him the fate of his brother. The band is now being led by the chief’s son, known as El Fiero, who is even more murderous than his father. He rules a wide territory where he exacts a heavy toll on peaceful villagers, who must provide him with food, horses, and women.

With the help of a proud young villager, Yndelicio Madera, Buell plots to locate El Fiero in his stronghold. When the man orders up a wedding feast to observe his pick of the village’s women, Buell and Madera follow the departing wedding party into the hills. There, after a chase on foot, El Fiero meets his end and Buell learns the fate of his brother.

Returning to civilization, Buell is met by a prospector he’s befriended along the way and a persistent young woman who has followed him to Tombstone. Now that he’s put his past to rest, she is happy to learn that he is ready for marriage.

Women. In a story that is about a test of manhood, the women seem pasted into the plot as if required by formula. Ellen, the girl Buell leaves behind, comes across as a tag-along little sister who won’t go back home no matter what he says. She has a nagging manner that cancels out any possible appeal she might have for him.

Madera’s half-sister is the tempestuous Teresa, who hangs out with the boys at the cantina, drinking and dancing. She throws herself at Buell in a desperate attempt to get him to take her away. Rubbing up against him both figuratively and literally, she is the stereotypical hot tamale.

Wrapping up. This is a straight-up western without embellishments. It does little to keep a reader from guessing long before Buell that his long-lost little brother has become the depraved Indian, El Fiero. While you wait for that recognition scene and get curious to know what will then happen between the two men, the novel leaves that aspect of the story undeveloped. The brother who shares a bed with Buell in the opening chapter has become a “good Indian,” i.e. dead. That seems to be enough.

Max Brand, in South of Rio Grande (1936), reviewed here a while ago, tells a similar story of brother searching for brother in Old Mexico. The twists and turns of that plot, the suspense, and the romance, show a masterly hand at work. Shireffs writes with a steady hand, for sure, but to compare the two writers beyond that would be unfair. So I won’t.

For a short bio and an appreciation of Shireff’s prolific output as a writer of western fiction, read Jon Tuska’s essay in Twentieth Century Western Writers. Tuska commends Shireffs for his his attempt to draw characters more believably human in their strengths and failings and for his historically informed portrayal of the West. This novel was apparently inspired by the disappearance of a boy in an 1883 Apache raid and the discovery in Mexico years later of a band of Apaches led by a blue-eyed redheaded chief.

Tuska recommends a series featuring a man hunter, Lee Kershaw, beginning with Showdown in Sonora (1969). He has high praise for a trilogy about Lee’s Indian grandfather, Quint Ker-shaw, which includes his “masterpiece,” The Untamed Breed (1981). Two of his novels were made into films, Oregon Passage (1957) and A Long Ride From Hell (1968). Trail’s End is currently available at amazon, Barnes&Noble, and AbeBooks.

Coming up: Martin Allerdale Grainger, Woodsmen of the West (1908)