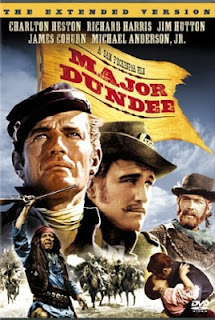 At some point, ambition has a way of overreaching itself. Sam Peckinpah’s first big-budget western is a lesson in that old observation. Its story tells of an officer in the U.S. cavalry who takes on a job of fighting Indians that is too big for him. Meanwhile, the film itself is the result of an ill-fated attempt to make an epic-scale movie against odds that nearly overwhelmed it.

Plot. Major Amos Dundee (Charlton Heston), with a company of U.S. cavalrymen, is in charge of a prison in New Mexico in the last year of the Civil War. It is full of Confederate soldiers, Army deserters, and civilian prisoners. From among them he gathers a contingent of volunteers to capture an Apache chief, Sierra Charriba, who has been ravaging white settlements.

They follow the Indians into Mexico where they are surprised by Charriba in an ambush and sustain considerable losses. Next they encounter troops of the French Foreign Legion, who currently occupy Mexico and object to American invaders. Heston’s men liberate a village, which throws a big fiesta in their honor. In the village, they find a beautiful widow (Senta Berger) with whom Heston becomes romantically involved.

From the start, Heston has commanded a fractious group of men, including black cavalrymen, civilians, and Confederate prisoners. Among the Southerners is an officer, Captain Tyreen (Richard Harris), who has agreed to follow Heston’s command until Charriba is captured. The celebration in the village temporarily unites the men and brings a truce between Heston and Harris, who have been at odds.

When one of the Confederates (Warren Oates) tries to escape, Harris defends him but keeps his word to obey Heston’s orders and executes the deserter himself. Berger then joins the band of Americans, having escaped reprisals in the village by the French garrisoned in nearby Durango.

Everything goes downhill for Heston when he is struck in the thigh by an Apache arrow. Treated by a doctor in Durango, Heston descends into a slough of defeat and self-pity. Berger discovers him with a whore who’s been keeping him company. Harris finds him literally drunk and in the gutter.

Back on his feet, Heston rallies the men for a retreat to the border. Before leaving Mexico, they lure Charriba’s Apaches into a trap, killing many including the chief. Then they have to do combat with the French to cross the Rio Grande. In this climactic battle, fighting on horseback in the water, Harris and many others are killed. Only a couple of dozen men survive to escape into Texas, leaving behind the bodies of the dead.

Contingencies. Thus summarized, the film sounds a good deal more coherent that it is during its 2+ hours of running time. The “extended version,” released in 2005, reconstructs the film as cut by its producer Jerry Bresler. It had later been recut by the studio before its theatrical release to make it shorter. Peckinpah did not have a hand in either version.

Given the scale of the film, it is arguable that Peckinpah’s version would have run much longer. The story goes that his original budget of $4.5 million was cut by one-third before the film went into production, but he went ahead to make a $4.5 million movie anyway. There are numerous characters and plot threads, much as we find in a John Ford western. Shot on location in Mexico, in color and Panavision, Peckinpah clearly intended to produce an epic.

A budget cut wasn’t the only obstacle. Many of the film’s problems can be traced to its being started with only a half-finished script. Writing while they were shooting, Peckinpah allowed the story’s central plot to shift away from its original conception. Part of that shift is due to the studio’s hiring Senta Berger, a European actress who would help the film sell in the international market. A major role not envisioned in the original storyline needed to be created for her.

Much of this behind the scenes material can be learned on the audio commentary that accompanies the DVD release of the film’s extended version. There, several film historians generally agree that Major Dundee works well during the first half, but while the second half has remarkable moments, it generally lacks coherence. The best that can be said is that learning from his mistakes, Peckinpah was able to make a much better film with The Wild Bunch, which followed in 1969.

Comment.  Major Dundee seems creatively conflicted at its core. The film dips deeply into western conventions while also challenging them. In many ways it seems to out-Ford John Ford. It makes an interesting comparison to Ford’s cavalry film Fort Apache (1948). That film is also about a military misadventure, and with its large cast of characters, it’s a mix of light-hearted and dramatic scenes. The landscape plays an important role in both films, as well.

Peckinpah’s film stops short of romanticizing the cavalry and the West. Wrong-headed though he may be, Henry Fonda’s colonel goes to his death with a kind of dignity. It makes John Wayne’s respect in the final scene plausible. Heston’s major, however, loses the respect he might have once claimed for himself. In the end, many have died because of his ambitions, and in the final confrontations with the story’s villains, he has not been much of a hero by the usual western movie standards.

Meanwhile, Peckinpah found locations in Mexico that are scenic without losing a sinister, forbidding aura. This was a West unsoftened by Hollywood conventions. It’s a raw, hostile place far easier to die in than to survive. In one grimly telling scene, after the Apache ambush, the dead are shown being buried in a mass grave--something seldom seen in earlier westerns.

Wrapping up. This is another film you can go on and on about. Richard Harris’ performance as Tyreen deserves several paragraphs. Mention of the film’s supporting cast (Jim Hutton, James Coburn, Ben Johnson, Warren Oates, L. Q. Jones, Brock Peters, Slim Pickens) deserves several more. More could be said about the various subplots, the use of humor, the cinematography, and the stunt work.

Telling a story of a dubious foreign military adventure, there’s also a political dimension to the film. It deglamorizes heroism and ponders the question of why men fight. Early on, Harris asks Heston, “Are you after the Apache or a promotion?” As has been said elsewhere, it’s a movie with ideas it wants to explore, unlike the standard action movie we’re likely to find at the multiplex today.

Major Dundee is currently available at netflix and amazon and Barnes&Noble. For more of Tuesday’s Overlooked Movies, head on over to Todd Mason’s blog.