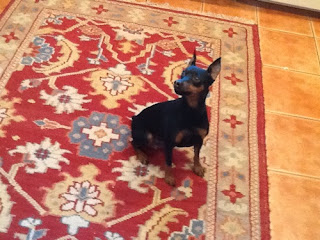 You may have noticed that Ron takes off Sundays and doesn’t even touch his laptop—for anything. He says it’s some kind of self-discipline to see if he can stay away from a computer screen for 24 hours. But I figure it’s just so he can lie around reading westerns all day if he wants to, without being distracted.

Having opposable thumbs would make this typing a lot easier, and it’s probably why a lot of dogs don’t do their own blogging. But I’m jumping at the chance to put in a few words here (and if you know any Miniature Pinschers, you know we are jumpers).

I came here a year ago last December from a foster family of min pins over in Orange County. I was a bit dubious about the new arrangement, as I’d just got used to the other place, and where I was before that is not a story I care to go into. Except that's where I got my name, which I like.

But the folks here turned out to be pretty friendly. I have no complaints except that I’d welcome a few more snacks during the day. Anyway, I’ve decided there are worse things than being adopted. And the only other thing I have to say on the subject is that people should think “rescue” when they want to get a dog. Pet shops are for fish and birds, not puppies.

I’m proud that I was thoroughly house trained when I moved in here. And as for bad habits, I just don’t have any besides barking at kids on bicycles and skateboards. I probably overdo the hysterics when someone I don’t know comes to the door. I don’t care if it’s the UPS driver, they might be coming to kill us. Otherwise, I’m a credit to my breed and my upbringing.

The picture above was taken of me on the rug in the kitchen, where I like to hang out because I get my meals here. I’m also alert to any people food that gets away from the cooks and slips onto the floor. You never know when you’re going to get lucky. To be honest, I’ll eat just about anything.

I get a long walk in the desert every day, except when it’s really windy or there’s rain. If it’s too chilly, I have to wear a sweater, which I think makes me look a little silly. In the summer, we go out before sunrise, like at 5:30 in the morning. Otherwise you just bake.

Ron won’t let me off the leash in the desert because he says I’ll chase a jackrabbit until my legs fall off, or the coyotes will get me. You can’t change his mind about things like that, though I haven’t given up trying.

So anyway, I just wanted to say hello to everybody. I’m pretty worn out now. I think I’ll go climb up on the back of the couch, where I’ve got a nice spot, and take a nap.