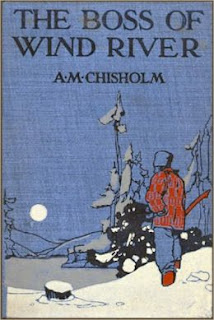 For a first novel, this logging adventure shows the work of an accomplished storyteller. It grips you from the beginning with an unexpected crisis thrust upon a young man and doesn’t let you or him go until the final pages. Neither far-fetched nor implausible, the tightly plotted story is based in the real-life world of the timber industry.

At the center of the story is Joe Kent, just graduated from college and called home from a trip abroad to take over his deceased father’s lumber company. He has only modest hope for success but gives it a go despite being almost totally inexperienced. The company has also been leveraged rather too uncomfortably, and a railroad monopolist wants to run him out of business.

Plot. Young Kent contracts to fell and deliver a winter’s cutting of timber to a sawmill. There’s a strict deadline for delivery, and if he doesn’t make it, the buyer will not only refuse to pay but sue for damages. Should that happen, loans and a mortgage will come due, with no extensions, and the company will go under.

There’s trouble before Kent and his men even get out to the woods. Garwood, the railway tycoon, raises freight rates, which severely cuts into the company’s bottom line. This development produces friction between Kent and the owners of a sawmill, the Clancy brothers.

Setting up camp for his logging crew on the Wind River, Kent discovers that the Clancys are cutting on an allotment right next to him. Their crew is bossed by a rough thug named McCane. There is immediately trouble as McCane makes one attempt after another to sabotage Kent’s operation.

When winter ends and it’s time to send the logs downstream, McCane and his outfit continue to interfere with Kent’s drive. With a Herculean effort, Kent’s men are able to make delivery to his client’s sawmills before the deadline. Paid the agreed price, Kent is able to liquidate most of his debt and save the company from bankruptcy.

Character. During the twelve months that elapse during the telling of the story, young Kent grows into his manhood. The biggest challenge is gaining the good will and confidence of the workingmen. Achieving that means the difference between their merely working for wages and the tireless self-sacrifice that follows loyalty and commitment to a boss they admire.

Though he’s seldom totally sure of himself, Kent has a combative streak that shows him to be fearless and willing to confront any challenge. It helps that he dresses like his men and is willing to work alongside them. More impressive to his men is that he can give as good as he gets when it comes to a fistfight.

Kent’s transition to manhood parallels the men’s growing acceptance of him as their boss. One observer sees that the work has made him physically tougher. In his “battered felt hat” and cork boots, he appears “bronzed and hard.” He’s become “stronger, graver, more self-reliant.”

Women. Chisholm almost but doesn’t quite exclude women from this story. Kent’s mentor, Crooks, has a daughter who’s been a chum to Kent since childhood. She’s something of a tomboy and prefers to be known as “Jack,” often complaining that she’d rather have been a man. She yearns to be out in the woods, living the life of the shanty men, enjoying the freedoms she doesn’t have as a female.

She is “direct of speech, frank, and often slangy.” She has learned much from her father’s friends, old-timers with unusual lives who trusted her with the telling of their stories. Thus, conversation with her may be filled with strange philosophies, odd expressions, and scraps of forgotten song from the Old Country.

Romance. Used to seeing Jack as a sister, Kent feels an unexpected affection grow almost unnoticed between them. The feeling, they discover, is mutual. It’s a very sensible and rational attraction, and after a brief discussion, they determine that they are in love.

They both understand that his first commitment is to the company. He has to make a go of it and keep it afloat. Partners in that effort, they determine not to marry until he successfully fulfills his contract for delivery of the timber. There is mention of a couple of kisses during their courtship, but sentiment takes a backseat.

Villainy. Kent has several villainous types to deal with. They range from the wealthy, scheming capitalist Garwood to McCane, the thug who sabotages Kent’s operation. Between them on a scale of increasing chicanery are Ackerman, a crafty insider and self-styled “director of enterprises,” and the Clancy Brothers, who are ruthless businessmen and competitors.

The four men are in league against Kent. It’s an unholy alliance that he only slowly discovers. We see how money corrupts as Kent’s lawyer, Locke, is offered a lucrative job by the railway to drop a case against them. A man of principle himself, he refuses and says he’ll only settle for fair market conditions and fair play for his clients.

Realism. Chisholm has done his homework when it comes to describing the operation of a logging camp. From the forging of roads into the woods to the transport of felled timber down the slopes and into the river, we get a description of the overall process. We also learn how the work is made to continue in unfavorable weather.

We also learn of the construction of the camp itself, the various structures and how they are built. The loggers themselves are portrayed as men of bruising, large-scale dispositions, whether they are filled with high spirits or ready for a fight. Chisholm seems fully informed as well about the complex transport of logs downriver and the particular expertise of the rivermen.

Wrapping up. Arthur Murray Chisholm (1872-1960) was born and educated in Toronto, Canada. The author of several novels, he was a prolific writer of short stories. FictionMag Index lists 100 works of fiction, most of them published in The Popular Magazine, 1906-1929. His novel Desert Conquest (1913) was reviewed here earlier.

The Boss of Wind River is currently available online at google books and Internet Archive, and for kindle and the nook. For more Forgotten Books, click on over to Patti Abbott’s blog.
Tweet

Illustrations: From the first edition by Frank Tenney Johnson