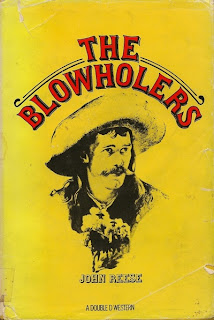 Blowholes are like sand traps provided by nature’s own hand. They are created by erosion, where a patch of top soil has been stripped by overgrazing and wind from a sandy under layer. You find them in regions of the high plains. You also find them in this darkly comic novel from the hand of western writer John Reese.

Plot. The blowholers of the title are a gang of four brutal low-lifes who savage a family of “movers,” so-called because they live a gypsy existence on the frontier. The father and sole parent of three children is murdered, and one of his daughters is fatally assaulted.

Almost as low as blowholers and movers on the social order is Ownie Cope, a jobless drunkard who lives with the novel’s narrator, Pete Heath. Cope is so outraged by the ruthlessness of the crime that he gives up drink and sets out on the “vengeance trail” in pursuit of the gang.

It takes Ownie half the novel to gather enough clues to even begin tracking the villains. Disguised as a mountain man, he pursues them from the scene of the crime to Denver. One by one they meet a violent end, though ironically not at Ownie’s hands.

After his close encounters with death, Ownie learns that he lacks the stomach for killing the one remaining villain. He also realizes that he lacks the character a man needs to be dealing out justice at the point of a gun. Taking up a lawful occupation, marrying a girl who loves him, and becoming an upstanding member of the community, he acquires the self-respect that has always eluded him.

Layering ironies upon ironies, Reese finally gives Ownie the opportunity to avenge the atrocity committed by the blowholers. The last survivor, an aging gunslinger named Doc Harper, appears in town, and the novel ends with a classic gun duel.

Counter-plot. The pleasures of a John Reese novel are only partly the thread of plotline that holds it together. For much of the novel, you are only half sure of the plot anyway, because Ownie is only one of several characters, none of whom really know what he’s up to. That includes the narrator, Pete Heath, who never expects Ownie to be more than the town drunk.

Reese has created an ensemble of characters, some of them already introduced in an earlier novel, Angel Range, reviewed here a while ago. Having read that novel, we already know Sheriff Abe Whipple, Deputy Thad Rust, the parson Rolf Ledger, wealthy rancher Cal Veneman, and others. They weave in and out of the story, along with the newcomers.

Incidents in the novel make up what is really the life of the community itself. They only happen to contribute to the development of the plot, and often without our full awareness. There’s a long build up to the revelation that one of the villains spoke with a Scots brogue. This involves the transaction of a sale of cattle that threatens to invade the streets of town with the herd that’s changing hands.

While the cowhands are in town, one of them gets shot in the leg, which calls for a trial, which in turn calls for pages of comic maneuvering by the attorneys, the judge, and the sheriff. The trial itself, when it finally comes, takes unexpected turns of its own. The outcome, of course, has no bearing at all on the hunt for the villains of the novel.


Humor. A story that starts with a brutal assault on a family can’t be called a comedy. But horrible things happen in a world where human folly also provides cause enough for laughter. Thus, there’s a tone of dry and sometimes grim humor in the narrator’s telling of the story.

In a comment on heroic accounts of revenge, Sheriff Whipple says that it’s only the glory part you ever hear. What you don’t hear is the ugly truth that real-life avengers seldom have either character or brains. Giving Ownie credit for not being a hypocrite, he then says of sincerity: “You can be as sincere as hell about the wrong things.”

Dialogue is often salty, as in a scene where Sheriff  Whipple loses patience with the judicial system. Taking him to task for not keeping a prisoner in jail, Judge Andy Obers says,

“This court’s order was quite clear—no bail!”

“I didn’t take bail,” Abe said. “Ask your own Goddamn court clerk if any Goddamn bail is recorded.”

“But you released the prisoner, you turned him loose in defiance of the court’s orders,” Andy said.

Abe said, “I done no such thing. You put him in my custody and that’s where he is, and when he’s due back in this court, he’ll be here.”

What you don’t expect in a Reese story is a streak of sentiment, but he finds a little room for that, too. Long believing that his mother was a riverboat whore, Ownie learns near the end of the novel that she was nothing of the kind. The manager of a touring theatrical troupe tells him that she was a classy and well-respected poker player, “a real lady in the finest sense of the word.”

Wrapping up. The Blowholers was originally the middle section of Reese’s much longer first novel, Jesus on Horseback (1971), about a community of folks living in Mooney County in northeast Colorado. That novel was republished as a trilogy. Book three, The Land Barons (1974), will be reviewed here soon.

For more about John Reese, read this blog’s reviews of Angel Range and Saddle-Broke. The Blowholers is currently available at amazon, Barnes&Noble, and AbeBooks.
Tweet