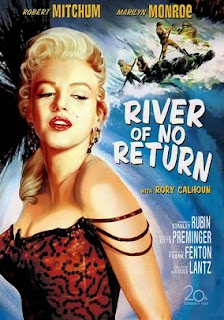 This is a western meant for CinemaScope. Shot in the Banff and Jasper National Parks of Alberta, Canada, it’s a breathtaking travelogue of river, woods, and snowy mountains. The majestic scenery often dwarfs its handful of characters. The film cries out to be seen on the Big Screen.

Viewers today are more likely to know this film because of one of its two stars, Marilyn Monroe. Although stronger actresses have appeared in westerns, she makes it one of the few whose female lead carries as much interest as the men cast opposite her. One could argue that River of No Return is a Marilyn Monroe picture and a western only incidentally.

Which is not to say that she overshadows her co-star Robert Mitchum. Only a decade after his first leading role in Nevada (1944), reviewed here a while ago, he is a solid presence on screen. He persuades with his physical authority and the measured range of his voice.

Plot. In the opening scene, Mitchum is reunited with his young son (Tommy Rettig). The boy has been sent to his father who is homesteading not far from a tent city in the gold fields of the Northwest. Monroe works there as a chanteuse in a saloon. Her boyfriend (Rory Calhoun) is a gambler who has just won a gold mine in a card game. No horses being available, he buys a raft that will take them downriver to the nearest town where he can file at a claims office.

Travel by raft is rougher going than they expected, and they are rescued by Mitchum as they pass by his homestead. The river, Mitchum tells Calhoun, is a series of treacherous rapids. They’ll never make it. In a change of plans, Calhoun steals Mitchum’s rifle and horse and heads cross country, leaving Monroe behind with the promise that he’ll return in five days.

An Indian raid forces Mitchum, Monroe and the boy to take to the raft and head downriver themselves. The rest of the film is their long, hair-raising journey, the odds against them all the way. Besides more hostile Indians, they encounter only two other humans (Murvyn Vye, Douglas Spencer), the prospectors who lost their mine to Calhoun. They are after the gambler but make trouble for Mitchum when one of them pulls a knife on him.

There’s plenty of trouble as well between Mitchum and Monroe. She’s loyal to Calhoun and gets worried when Mitchum reminds her that as a horse thief her gambler boyfriend deserves to hang. She tries several ways to slow their progress downriver, including making nice to Mitchum, which he doesn’t buy and leads instead to a fierce wrestling match between the two of them.

Finally arriving at their destination, they discover Calhoun busy playing cards and full of excuses for abandoning Monroe. Realizing the depth of his betrayal, she tries to prevent him from settling scores with Mitchum. The conflicts between the three of them are resolved in a couple of unexpected ways that I’ll leave for curious readers to discover for themselves.

Scale. The film’s director was the formidable Otto Preminger. The scale of the production shows his mark on the material. The opening scene, set after dark in the tent city, is a tour de force as the camera follows Mitchum riding through a maze of tents and people. The shot starts simple and then continues to unfold like a 12-ring circus as the camera tracks and tracks and tracks. We are slowly immersed in a scene as complex as a Hieronymus Bosch painting of hell.

Getting off his horse, Mitchum talks briefly to a priest, who is dismounting from a mule, then walks toward the camera to speak to the trading post owner, too busy to look up from his work. Behind them, a horse drawn wagon emerges from a lake and tips to one side, its women passengers slipping into the water, shrieking with laughter, and then being carried off by several men. It is storytelling on a grand scale.

One often reads of Monroe as a tentative actress, requiring many takes to complete a scene. A marvel of this film is the many scenes done as a master shot, played through from start to finish without edits. In them, she doesn’t miss a beat or take a false step. In a few she’s also playing a guitar as she sings, and her strumming of the guitar is tightly synchronous with the song track.


Then there are the river scenes themselves. Stuntmen obviously (and bravely) handled the raft in the long shots. But in closer shots, we can see it’s Mitchum and Monroe. In the worst of the rapids, the screen image is clearly a process shot, done in the studio. But intercut with point of view shots taken on the river, the camerawork is thrilling. With the roar of the water on the soundtrack, it had to be a visceral experience for most 1950s moviegoers.

Themes. The script gives us a father-son theme often found in westerns of the time. We get another example in the contemporary film, Shane (1953). In that film, also shot in scenic surroundings, the boy is divided between his morally upright father and the mysterious stranger who turns out to be a gunslinger. In River of No Return, Mitchum is a blend of those two men, and the boy is torn by what he learns of his father’s past.

The relationship between Monroe’s and Mitchum’s characters is not, as you’d expect, romantic. There’s an edge often in her regard for him, and he never seems to win more than grudging respect. For his part, he develops no warmth for her either. When he grabs her and physically overpowers her in a sexually fraught scene in the woods, it seems intended only to show her who’s boss.

For the entire trip, she is a burden to him, and one likely to betray any trust he might place in her. We might even dislike her ourselves, except that she is tender to Mitchum’s son, and the motherless boy is emotionally attached to her from the beginning. She and Mitchum finally reach something like a truce when he finds shelter for them and tells her to get out of her wet clothes and wrap up in a dry blanket. He then helps her warm up by giving her a long, businesslike rub down.

Wrapping up. One could go on, but enough is enough. I saw this film when it was new and enjoyed it for the excitement of it. At 12, you miss a lot of the nuances, broad as they are, but I found this film enjoyable in different ways today. It takes some doing to downsize the mythic proportions of a Marilyn Monroe and fit her character into a western story. But you can forget all that after a while and begin seeing her as the tough-hearted, lost young woman she’s playing.

English-born screenwriter Frank Fenton provided the screenplay. Also a novelist and writer of short stories, he is remembered for the novel A Place in the Sun (1942).

I love Tennessee Ernie Ford’s treatment of the film’s theme song, but I could do without Monroe’s songs. They seem too modern for the gold rush era. Her performance of them would be more at home in a vehicle like Gentlemen Prefer Blondes, but even so, they don’t spoil the film as a western. If Marlene Dietrich can belt out a couple songs as the chanteuse in Destry Rides Again (1939), we can grant the same license to this film.

River of No Return is currently available at netflix and at amazon and Barnes&Noble. For more of Tuesday’s Overlooked Films and TV, click over to Todd Mason’s blog.