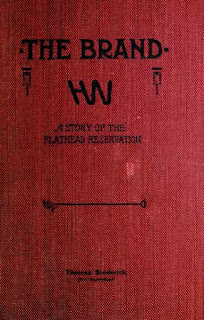 The Brand takes its title from a key moment in the novel’s closing chapters as Broderick’s feminist message is burned permanently into the hide of its villain. But the novel’s subtitle, A Tale of the Flathead Reservation, promises somewhat more than it delivers. Full-blooded Indians are mostly peripheral to its story of a “quarter-breed’s” forbidden love of a white woman.

Plot. Young Bess Fletcher arrives by train in Montana with her brother Jim. They are on their way to the cattle ranch of Jim’s college pal, Henry West, a fellow Harvard graduate. The ranch is on the Flathead reservation close to Polson and Flathead Lake. Jim, who has lived and worked on the ranch before, has been hired as Henry’s foreman.

The West is all new to 20-year-old Bess, who is enraptured by its promise of “untrammeled freedom.” She will hear nothing, she says, of “don’ts and can’ts.” However, a Big Don’t governs much of the plot of the novel.

Henry West is a handsome man, well polished and a gentleman. One look at Bess, and he recognizes her as the sweetheart he has long dreamed of and yearned for. He is, alas, only three-quarters white and, for her, on the wrong side of the color line.

Meanwhile, she is being courted by David Davis, the government agent of the Flathead reservation. He is an oily and manipulative character, entirely too pushy in his seductive advances. Henry despises Davis but has a horrible secret involving the honor of his dead sister, Helen, which prevents him from speaking up about the man. We gather that Davis was the contributing cause of her death, though Broderick is not specific about the details.

Bess was schooled by convent nuns and is an innocent about affairs of the heart. She feels no real affection for Davis but is too polite to turn him away. In time, she persuades herself that he is the right man for her. But on the day of their wedding, seeing Davis for the first time, her bridesmaid recognizes him. He is the man who once seduced and abandoned her sister—which brings an abrupt end to the ceremony.

Character. An irony in the novel is that Henry is as thoroughly schooled in matters of character as any of the other men. Being an exemplary gentleman is as close as he can come to being white. At first meeting, Bess finds him “splendid,” and Jim tells her,

At college he was so superior in mind, ability, and morals to the majority of his colleagues, that every one looked up to him. He was one of them and no gathering was quite complete without Henry West.

She says to her brother, “I had no idea there were such men as he away out here in the West! No wonder you rave over him and always sing his praises.”

Villainy. Davis (or Davies as he is revealed at the end) is first and last a cad. If he is guilty of the usual corruption ascribed to government agents of Indian reservations, we get no hint of it. But we gather that he freely takes liberties with the native women. We get a sample of this when Bess has playfully dressed and made herself up as a squaw, and he mistakes her for an Indian. Altogether, he is a lesson in the employment of seductive maneuvers to weaken a woman’s resistance.

Even revealed at last for his truly evil self, he is fiercely unrepentant. We see the full extent of his cunning when he returns to take Bess by force. She has to pull a revolver on him to defend herself. He doesn’t relent until Henry drags him to the branding fires where the ranch’s brand “HW” is burned into his chest. That means “Honor Women,” Henry tells him.

East vs. West. The novel voices the usual commonplaces about the superiority of life in the West. Returning from the East after two years, James is pale and sickly. He begins to recover his health as soon as he’s riding a horse and working in the open air.

Bess’s easy abandonment of Eastern ways starts with riding astride her horse instead of side saddle. Given a rifle to practice target shooting, she proves herself a master in three weeks’ time and is given a .38 Smith & Wesson to carry. She uses it to kill a rattler and then has the temerity to wear the rattles on her hatband.

Style. This is a readable novel with a story told at a reasonable pace. The protracted courtship of Bess by the villain Davis makes for some skin-crawling scenes, as time after time she allows him to get over-familiar. You wish someone had told her that etiquette doesn’t require her to be polite to men with boundary issues.

There are page-turning scenes of suspense, as when Broderick gets her heroine lost, separates her from her horse, and puts her in the path of a stampede. This requires a rescue by Henry, whose horse is exhausted by the ordeal and has to be shot. Somewhat more original are her passages of realistic description, for Broderick seems to be familiar with the area where her story takes place.

Wrapping up. Broderick’s dates are unknown. The Brand was published by Alice Harriman in Seattle, and it seems to be Broderick’s only published work. She is chiefly remembered today for inspiring the novel Cogewea, The Half-Blood (1927) by Native American writer, Mourning Dove (Christal Quintasket).

The Brand is currently available online at google books and Internet Archive, and for the nook. For more of Friday’s Forgotten Books, click over to Patti Abbott’s blog.
Tweet

Image credits:
Illustration from the novel by an unknown illustrator
Photos, Wikimedia Commons