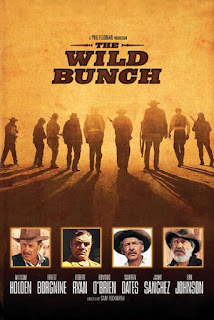 Preview audiences reportedly were roused by such strong reactions to this film that many left the theater in protest. Sam Peckinpah’s The Wild Bunch immediately won a reputation for its graphic violence. Because of or in spite of that, it quickly found a place on most western fans’ top 10 list. Over 40 years later, it remains a powerful and absorbing story.

Plot. Part of the impact of the story is its simplicity. Without a lot of twists and turns, it follows a gang of thieves led by William Holden from a failed railroad robbery to a successful one and then on to their deaths. In a parallel subplot, they are followed into Mexico, where most of the story takes place, by a raggedy group of hired guns, led by Robert Ryan.

That’s pretty much it.

It’s 1913 or thereabouts, and Mexican federal troops are fighting a losing battle against revolutionaries led by Pancho Villa. Holden and his gang (Ernest Borgnine, Warren Oates, Ben Johnson, Jaime Sanchez) agree with a Mexican general to steal a shipment of arms from a train just north of the border. The train is guarded by a contingent of U.S. soldiers.

A half hour in the middle of the film is a hold-your-breath portrayal of the train robbery and an escape with the guns across the border, Ryan and the troopers in hot pursuit. The sequence is beautifully shot and edited, with moments of both nail-biting suspense and comedy.

Character. With over two hours at its disposal, the film has time to thoroughly explore its characters, and it does. We first see the members of the gang disguised as cavalrymen. In Mexico, they gradually shed the uniforms and dress as very different individuals. From a distance you can tell them apart by the hat each has found to wear.

William Holden is especially strong as Pike Bishop (wasn’t there a famous Bishop Pike in the 1960s?), a man of easy stature who happens to be an outlaw. By the way he carries himself, you can see he has the intelligence and the experience to command this group of men. He seldom needs to raise his voice, but when he does, it keeps them in line.

Without question, he is the most admirable man in the film. His leadership of the gang is both firm and fair. When Johnson and Oates want to cut Sanchez’s share of the take, because he’s young and Mexican, Holden sets them straight. The deal was equal shares for everybody, period.

By comparison, Harrigan the railroad man (Albert Dekker), is a cheap bastard who hires Ryan to bring in Holden’s gang, but hamstrings him with the support of incompetents. The townsfolk are a pious bunch of temperance advocates. The U.S. Army troops are no more than unseasoned and disorganized young recruits. The Mexican general is a drunken, womanizing despot, and his men are no better.

Sympathy, where there is any in the film, goes to the poor villagers who are at the mercy of the Mexican federales. And we are meant to sympathize with Ryan. He and Holden are former partners in crime. Saddled with an impossible job, Ryan is threatened with being sent back to Yuma prison if he fails. From the look on his face, we know that his respect for Holden gives him feelings that are more than mixed.

Evil. Peckinpah’s wild bunch is not so much wild as they are simply day-by-day survivors in a dark and amoral world. In the opening scenes, a gathering of small boys and girls watches with fascination as two scorpions are being tormented by a swarm of ants. Far from being sweetly innocent, they’re shown as happily participating in human cruelty.

During the gun battle that puts a temperance parade in the crossfire between Ryan’s men and Holden’s, the children watch not with horror but fascination and excitement. While bodies still litter the street, they are reenacting the scene, pointing their fingers and firing imaginary guns. To be childlike in the film is to be insensitive to violence and suffering.

Where Peckinpah is supposed to have wanted to adversely shock audiences with a realistic, bloody portrayal of violence, he may have been less than successful. You can argue that the film feeds an appetite for even more graphic violence. Like the children raptly gathered around the scorpions and ants in the opening scene, audiences are entertained by violence. Hard to say how much it would take to jolt us out of that addiction.

Women. A feminist reading of the film would note the absence of women characters who are neither temperance fanatics nor cheap whores. There is no Maureen O’Hara (The Deadly Companions, 1961) or Senta Berger (Major Dundee, 1965) for a love interest. The best that can be said is that Holden’s gang treats their whores either playfully or tenderly. Only hot-blooded Sanchez is moved to put a bullet in the back of a girlfriend who left him for the high life with the generalissimo.

Sentiment, where you find it in the film, is for the old-fashioned manly virtues long the subject of western films—loyalty, friendship, honesty, respect, keeping one’s word, and defending the weak and downtrodden. And outside of Holden’s gang, those virtues are in short supply here.

The many parts of the story fit together so smoothly, and the performances are so memorable. The cinematography is an expert blend of long shots that capture the terrain and close-ups that make the characters vividly and precisely drawn. Much of the film’s impact is in the innovative editing, especially in the action sequences, which involve many characters and points of view. Both the opening and closing gun battles convey utter confusion without being confusing themselves.

The film was shot in color and Panavision on location in Mexico. The screenplay was co-written by Walon Green and Peckinpah. Green went on to a career as writer and producer of several long-running TV series: Hill Street Blues, Dragnet, ER, and Law and Order. The Wild Bunch is currently available at netflix and at amazon and Barnes&Noble. For today’s reviews of truly overlooked movies, click on over to Todd Mason’s blog.
Tweet