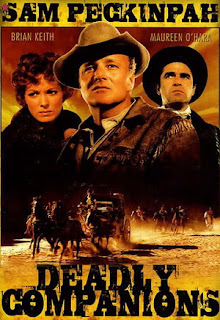 Sam Peckinpah had only a short career in TV when he directed this his first film. The finished product is a little raggedy at points, but it’s a gritty western story with an excellent cast. Maureen O’Hara, who co-produced the film, is her glowing self, and Brian Keith turns in a solid performance as the grim avenger of a vicious wrong.

Plot. Keith rescues Chill Wills from the hands of several unhappy poker players, who’ve caught him cheating at cards. He befriends Wills and a trail buddy (Steve Cochran) who have plans to rob a bank. When other robbers get to the bank first, they join the locals who open fire on the fleeing gang. The young son of a dancehall employee (Maureen O’Hara) is accidentally shot by a bullet from Keith’s gun.

O’Hara insists on taking the boy’s body across Apache territory to a town called Siringo to have him buried beside his father. The three men follow as an unwelcome escort. Keith hopes to ease his conscience for killing the boy. The other two have reasons of their own, until they overplay their hand and Keith forces them to leave. While he sticks with O’Hara, he can’t get her to warm up to him. “Are you always that stubborn,” he asks her, “or are just hard to figure out?”

The Apache make an appearance but turn out to be drunk and disorderly, fooling around with a stagecoach they’ve come into possession of until overturning it in a pond. One sober Indian, however, is more menacing as he aims some warning shots at Keith and O’Hara with bow and arrow. Found alone by him in a cave, O’Hara dispatches the Indian with a shotgun blast.

Arriving at Siringo, a long abandoned settlement, the two discover that Wills and Cochran have followed them. It’s now a showdown between the three men. Once a prolonged exchange of gunfire resolves their differences, O’Hara allows that maybe she’s underestimated Keith, and they ride off together into the sunset.

Twists. Brian Keith usually had such a sunny disposition in his films, it is unusual to see him so grimly and convincingly unsmiling. His character comes across as a bitterly proud man, a veteran of the Civil War, still wearing the yellow-striped pants of his Yankee uniform. His sullen attitude is underscored by a refusal to remove his hat.

Only later do we learn that he literally bears the wounds of his wartime service. At his hairline show the scars of being scalped by the Confederate soldier he’s sworn to avenge. The disfigurement is also a mark of his shame, as he regards himself unworthy of O’Hara’s affection once he’s won it.

Another twist in the casting is Chill Wills as a villain. Grizzled and dressed in cast-off clothes, he is a grimly comic figure.


Quirks. There’s an odd Peckinpah moment as the three men ride into a town. Above them, as if about to jump from a rooftop, stands a boy with a harmonica. He is the boy later shot by Keith. We assume he’s been driven to the roof by other boys on the ground, but there could be other reasons that we never learn.

An element of the plot reportedly considered unsuitable for audiences at the time was the use of a coffin with a dead child in many of the scenes. The story is told that to get financial backing, the screenplay was first novelized by the writer, A. S. Fleischman, and published successfully as a western under the title Yellowleg.

Also unexpected is the title song, sung under the opening credits. Instead of the usual deep male voice, Tex Ritter or Frankie Lane, we hear a woman singing the lyrics. And we learn from the credits that it is O’Hara herself. Classical guitarist Laurindo Almeida also gets a credit.

Obsessions. It’s a dark western that prefigures the dark themes to be found in later Peckinpah films. His men have been brutalized by their experience of life. Each has been reduced to an obsession. Keith with revenge, Wills with robbing banks and creating a secessionist state called Freedonia, Cochran with women.

His character, a handsome Johnny, cannot keep his mind or his hands off O’Hara. Her scorn for him is only fuel to the fire of his libido. Though hardly arch villains, neither Wills nor Cochran is redeemable. They are headed for a violent end because they believe themselves too clever and persistent to avoid it.

Keith’s obsession with revenge is broken by the ounce of conscience that makes him feel responsible for the death of the boy. When O’Hara refuses his protection on the trail, he proves the strength of his character by sticking with her, at the risk of his own life. Though at story’s end the scar on his forehead remains, the love he finally wins from her softens the stigma he has carried.

Wrapping up. Maureen O’Hara got first billing when this film was released. She surely shines throughout as a strong and tragic figure. A widow, she is forced to make a living at a dancehall and is thus scorned by the respectable women of town. Losing both a husband and now her son, she is broken by life on the frontier, but unbowed. It’s the role of the tough but beautiful woman she often played so well.

The film was shot in color and Panavision at Tucson, Arizona. Peckinpah, whose later career is well known, had been writing for TV from 1957, including numerous episodes of Gunsmoke, The Rifleman, and The Westerner.

The Deadly Companions is currently available at netflix, amazon, and Barnes&Noble. For more of Tuesday’s Overlooked Movies and TV, click on over to Todd Mason’s blog.

Coming up: Ralph Beer, "The Other James Crumley"
Posted by Ron Scheer at 6:00 AM