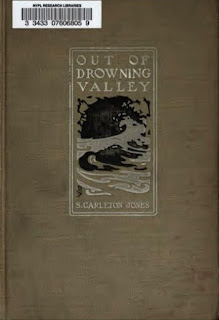 This novel of gold fever and malice is as tightly plotted as a closely matched chess game. Pitted against each other are an ex-con and a villain who will stop at nothing to steal everything he can. Their story takes place in the wilds of the Canadian West on Indian land, hundreds of miles from civilization. The nearest settlements are mining camps.

In a cave opening onto a remote lake is a mother lode of gold. The central character, Red Scarlett, and a life-long friend, Billy Halliday, have been led there by an obliging Indian. They are told they can take out whatever gold they can carry, but they have to hurry. When the rains come, the lake rises and floods the cave. Hence the name, Drowning Valley.

Plot. Scarlett and Halliday learn in chapter one that they have been followed on the way to their rendezvous with the Indian. The man following them is a French-Canadian, Sabarin, who is in league with the novel’s villain, Eldon. They capture Sabarin, but he escapes. Later, he and Eldon lie in wait for Scarlett to emerge from the valley with the gold.

On the way to making a modest deposit in a mining camp bank, Scarlett is observed by a girl, Athol, at a roadhouse. Later, the two get to know each other well enough to fall in love. When Eldon and Sabarin interrogate her, she reveals nothing of what she knows, but her uncle, with the encouragement of a bottle of whiskey, is more forthcoming with information.

Eventually, in a driving rainstorm, he leads Eldon and a gang of thugs into the valley where a sudden flood makes statistics of most of them. Eldon and Sabarin manage to reach the cave, but rising waters threaten to trap them all, including Athol, who has now joined Scarlett and Halliday.

A convenient earth slide opens a passageway in the cave to the great outdoors, and the three escape as the waters swirl around them. The villains, having taken what they think is an escape route, aren’t so lucky.

Romance. Love blooms between the lonely girl and Scarlett, who until now has been alienated by the fair sex for undisclosed reasons. We know that he is dismissive of marriage, and when he first meets the girl at the roadhouse, she surprises him with her ability “to do a man’s work.” When he finally takes a good look at her, he sees that she is pretty, and her face makes his heart “turn over.”

Back at the cave, he finds that he keeps thinking about her. He finally confesses his love to her, though he considers himself unworthy. Her love for him works its magic on his manhood. “He was not just a money-making slave anymore,” he realizes. “He was a man, to love and live, and be happy with the one woman in the world.”

Villainy. In the black and white moral universe of the novel, Eldon is evil incarnate. When he waylays Scarlett, he ties him up with rawhide in such a way that any attempt to struggle out of his bonds will choke him.

Gifted with intelligence and perseverance, Eldon has allowed these virtues to be corrupted by his penchant for thievery. Frustrated by failed efforts to trap Scarlett, he is crafty enough to seize and make use of whatever advantages that chance may throw his way.

Women. Living among men of questionable moral character, Athol sees Scarlett for what he is, a decent man. By comparison, her uncle is a troublesome responsibility, reliable only when he is not drinking. She has learned early to exercise a fierce independence.

She tells Scarlett that she can take care of herself and carries a revolver that she is not afraid to use. He says, “Never saw the girl I’d trust with one,” but Sabiel the Indian assures him that she is “good as a man” with a gun. Demonstrating this with a rifle, she neatly shoots the letter A into a distant fence board.


Indians. Jones shows sparse knowledge of either real Indians or stereotypes of them. For living with a tribe far removed from white settlements, Sabiel is unusually savvy to white ways. He speaks coherent English and lives as independently as a white trapper or mountain man.

It’s unclear why he would risk betraying the trust of the tribe by leading Scarlett and Halliday to the cave. He also supplies them with shelter, food, and a canoe. This is not an Indian one is likely to find in other western fiction of the time.

Style. The elements of plot and character fit together like a jigsaw puzzle. Point of view shifts among Scarlett, Athol, and Eldon, but none of them has the full picture. Jones slyly manipulates them by withholding key information from each. When a word or two might remove misunderstanding, characters choose to remain silent.

First serialized in Munsey’s The Cavalier in 1909, the novel’s chapters typically end with abrupt cliffhangers. Meanwhile, to prolong suspense, the story is told at a painstakingly slow pace. Jones accomplishes this by often focusing in detail on what her characters are thinking. While they carry on in their misapprehensions, false assumptions, and dogged reasoning, it takes uncommon patience not to skim read or skip ahead.

Wrapping up: Canadian writer Susan Carleton Jones (1864?-1926) was a lifelong resident of Halifax, Nova Scotia. According to FictionMags Index, 20 or more of her stories, novellas, and novels were published during the first two decades of the twentieth century.

Out of Drowning Valley is currently available at google books and Internet Archive, and for kindle and the nook. For more of Friday’s Forgotten Books, click on over to Patti Abbott’s blog.
Tweet