The Western Literature Association has been meeting over in Prescott, Arizona. Some among this group of scholars have been happily reinventing the whole idea of American literature. The WLA blog reports a panel discussing the pioneering work of Annette Kolodny who wrote an influential article in 1992, “Letting Go our Grand Obsessions.” 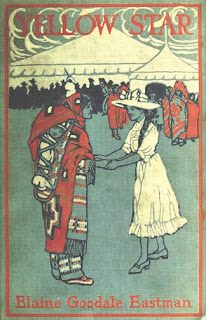 She challenged back then a bunch of “grand” notions about what folks mean by “American literature.” One of them is the idea of “the frontier.” And since that’s a word that gets kicked around a lot in talk about westerns, I wanted to devote a few words to it here.
A new frontier. Kolodny argued that the frontier is not just the unsettled areas at the advancing edge of “civilization.” It exists in a geographical area, yes, but it’s not that area itself. It’s the place where different cultures come into contact and begin to merge. Think of Tex-Mex and you have an example.
Another example even closer to BITS is the absorption of vaquero culture and practices into what became the American cattle industry. Just think of all the Spanish words absorbed by cowboys into the English language: rodeo, lariat, ranch, buckaroo. A Texan version of this culture then traveled northward as far as Canada with the cowboys who adopted it.
We are used to thinking of this as a “dominant” culture and its language taking what it needs from a lesser one. Kolodny would see it as only another example of how cultures blend at the boundaries – a process that continues today in the multi-lingual Southwest and California. And with every new wave of immigrants to the New World, there are still those boundaries of contact. The frontier, she says, never closed.
She also reminds readers that Native American cultures had been bumping up against each other for centuries before the arrival of Europeans. There was a vast network of trade routes along which cultures and their products and technologies spread. Indians were accustomed to encounters with “foreigners,” whether friendly or hostile. 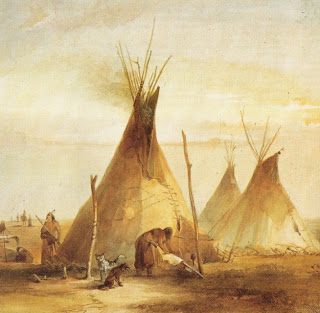 And one other thing to remember: the Native American populations were reduced more by “foreign” microbes than foreigners themselves. Europeans brought a kind of Black Plague with them that wiped out as much as two-thirds of those who were here first. This resulted in the impression among early explorers that the western frontier was virtually “empty.” It hadn’t been.
American literature, Kolodny says, has been whatever’s recognized as literary at the English-speaking urban centers. As a result – big surprise – any literature that came from points of contact with other cultures has been regarded as regional or “marginal,” and therefore of lesser importance. Maybe not even literature at all.
Connecting the dots. It’s early for me to be doing this, but I start connecting some of these ideas with the western fiction I’ve been reading. Some things pop out right away.
Life on the margins, Kolodny points out, is first about encounters with “foreign” landscapes and geography. This subject is often celebrated in western fiction, where stories involve individuals in a vast wilderness terrain or at the mercy of the elements. Thus, the little settlement that’s the only sign of human life from horizon to horizon came to represent “the frontier” in the American imagination.
More complex is the debate often going on in this fiction between Eastern and Western values. Or to use Kolodny’s terminology, think of it as a dialogue between the center and the margins.
Whether writers were Easterners or Westerners, the book-buying public was in the East. And it was the Eastern-based editors who were selecting what got into print. We can assume what they picked was their idea of what would sell. 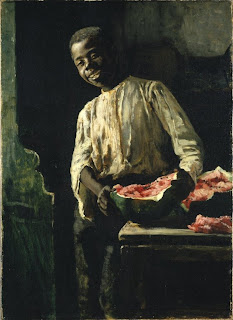 So what we get in western fiction is what would fit Eastern notions of the frontier. And that includes the racial biases and the appearance of Native Americans, African Americans, Asians, “half-breeds,” and Mexicans as little more than cardboard stereotypes. There are exceptions, but they are not many.
The notion of a “half breed,” in fact, seems to have been the most repellant of all for readers, since that’s the way this individual is cast in novels. The French-Indian central character in Stewart Edward White’s The Westerners is supposed to make your skin crawl. White even explains the genetics that account for his amorality. It’s a short step from that to a similar view of any cross-cultural output. (Scholars, by the way, like to use the term “hybridizing” when cultures meet and mix.)
So the western novel is constrained by the assumptions of the East, and they come together in a myth about racial, cultural, and technological dominance over inferior peoples. Some readers and moviegoers still prefer that myth. It would be interesting to measure how much the early western helped create it. Meanwhile, scholars of American Literature are shaking things up in a way that may eventually create some new myths.
Further reading:
Annette Kolodny. “Letting Go our Grand Obsessions: Notes Toward a New Literary History of the American Frontiers,” American Literature 64.1 (1992), 1-18.
Image credits:
1) Book cover from Yellow Star: A Story of East and West (1911) by Elaine G. Eastman. Eastman was a teacher among the Lakota Sioux and wife of Native American physician Charles Eastman. Illustrators, Angel de Cora and William Henry "Lone Star" Dietz. Source: wikimedia.org.
2) Sioux tipis, Karl Bodmer, 1833; wikimedia.org
3) I Know'd It Was Ripe, Thomas Hovenden, c1885, Brooklyn Museum; wikimedia.org.