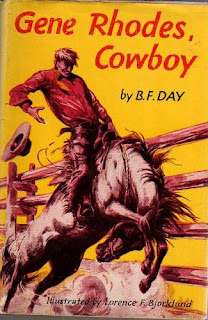 This curious biography of writer Eugene Manlove Rhodes was published in 1954. Reading it takes you right back to that post-war decade, if you were around then, for Day was a writer for Reader’s Digest. The style and tone of that monthly magazine are unmistakable. It existed at the dead center of American mainstream culture. A wholesome, family-friendly periodical, it embodied the unquestioned values of its middle-class audience. My father, a working man all his life, with an eighth-grade education and a life-long curiosity about most everything, hardly missed an issue.

In this splintered age, it’s hard to imagine a publication that  appealed to such a huge popular audience. But it did. It even encouraged book-reading of a kind, publishing each month 4-5 current novels in “condensed” form. In my book-starved boyhood, far from a public library or bookstore, I remember reading them. 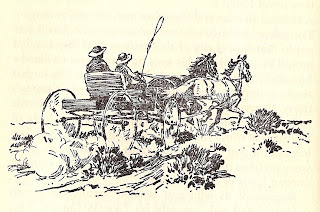 Day’s short biography of Eugene Manlove Rhodes brought that all back. Not in a nostalgic way, but as an object lesson in how the values of a time and place get embedded in a writer’s tone, style, and choice of details.

To meet the expectations of her 1950s audience, Day takes a life that was full of contradictions and complications and smooths it all over until it fits into a familiar pattern. In this case, it’s the story of a striver and a scrapper from humble beginnings who makes a name for himself as a writer, with the encouragement of a loving wife.
The wife. Rhodes’ widow, May, apparently contributed generously to the writing of this book. Day dedicates the book to her. In 1897, she was recovering from an illness, the mother of two boys by a previous marriage, and wrote Gene a fan letter after reading two of his published poems.
His reply to her was 20 hand-written pages, signed “Love, Gene,” and a long-distance romance bloomed between them. The only thing separating them was 2,000 miles. She lived in Apalachin, New York. After marrying in 1899 and living together in New Mexico for a while, they both returned East so May could look after her ageing parents. And so Gene gave up cowboying and became a farmer, devoting what time there was to writing – and amusing himself . 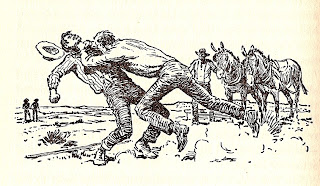 The biography. It’s a short volume, fewer than 200 pages, with drawings by illustrator Lorence F. Bjorkland at the head of each chapter. As biography, it makes no attempt to tell the whole story. Day simply selects 25 or so key episodes mostly from the years before Rhodes’ marriage and dramatizes them like fiction.
It’s a mid-century American success story, showing how a young man of particular character, with a fighting spirit, works hard, makes sacrifices, and eventually makes good, overcoming the limitations of his humble, rural background. He is respectful to his family, helping to support them from the age of 13. Any character flaws are regarded as the quirks of a man who has earned the right to have them.
So Day makes little of his poker playing, which lost him a lot of money over the years. And it’s a matter of amusement that he became obsessed with baseball in later years and passed up opportunities because he refused to write during baseball season.
Sitting down and writing she admits was something he did reluctantly anyway. What she glosses over is the toll it took for him to leave the New Mexico he loved to join his wife in the East. And Day doesn’t mention that he lived much of that time from hand to mouth and died in poverty, begging for an advance on a book so he could put food on the table. 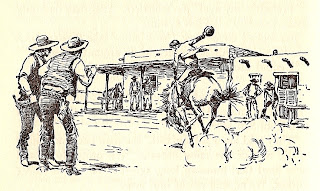 How to read the book. Remembering that it’s a spouse-friendly biography, you can read it as a reflection of a reflection. Given its Reader’s Digest orientation, you can expect a degree of “truthiness.” And Day is wrong about at least a couple details. She has Gene reading books redeemed with Bull Durham coupons in the 1880s, when that promotion was apparently not introduced until the late 1890s. She also has Levi’s as regulation cowboy wear, when that didn’t become the case until later, as well.
I did learn one thing I’d never come across before in my reading about the Old West. I knew a few of the rules for gun fighting, but Day has found a seven-point code of behavior that’s worth a moment to review here:
Day’s tone gets a little disingenuous at points. Commenting on Geronimo’s raids in the 1880s, which took many lives on both sides of the border with Mexico, Day refers to the Apache chief as “rascally.” She also uses the word “gay” in every sense but the one it’s come to be known for:
In town for their leisure moments, Gene and his friends were a gay lot – shooting a game of pool, playing poker, occasionally getting into a fight. If they had problems back home – which they all did – they didn’t mention them. All the women around Tularosa and Alamogordo and Engle considered this gay bunch “wild,” which they were (pp. 147-148).
One may well suspect that not “all” the women found this unattractive – gay or not. 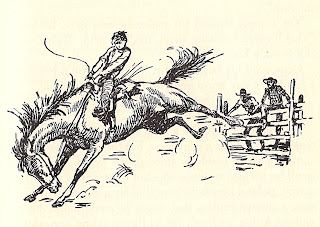 The writer. About Rhodes’ writing career, Day doesn’t have much to say, except that he was painstaking in getting the details right and undaunted by rejection. While an early story was sold to McClure's, Gene set his sights on The Saturday Evening Post. Over a period of two years, he wrote and submitted the same story six times before it was finally accepted. Versions of it ranged in length from 3,500 to 22,000 words.
Day doesn’t tell us which story it was. She also doesn’t mention that his first two stories at the magazine were co-authored by Henry Wallace Phillips, an already established fiction writer.
If I once knew, I’d forgotten that characters in his books had real-life counterparts. Jeff Bransford, for instance, was a “half-Indian” cowboy at the Bar Cross ranch where Rhodes wrangled horses and then cowboyed during his teenage years.

Like I said, it's a curious book that maybe says as much about the 1950s as Gene Rhodes. Beth Day, by the way, a widow herself, went on to marry General Carlos P. Romulo of the Philippines.

Image credits: Illustrations from the book by Lorence F. Bjorkland