This is a book about longing. It longs for a time past and a place on the frontier that was like a Garden of Eden. It longs for a kind of utopian community where there is order without the need for law. It’s also about the longing of men and women for each other. 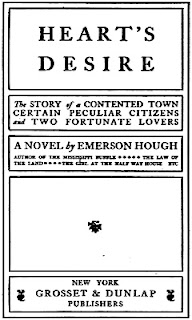 Sentimental journey. It’s a sentimental book and much the product of a Victorian frame of mind. But the sentiment is well earned. It works as hard and as honestly to make a case for its imagined world as the hard-edged cynicism of our own time.
The central character in Hough’s book is a young lawyer in a “quasi mining camp that was two-thirds cow town” called Heart’s Desire in south-central New Mexico. Hamlet might be a better word, both for the town and the main character.
There may be 250 souls in Heart’s Desire. It is a single dusty street following the course of a crooked arroyo. Along it is a string of structures, mostly adobe, plus a few made of logs. The town is nestled in a mountain valley. Above it are mountain peaks, and above them is the pure, blue New Mexico sky. The town is, no doubt, the White Oaks, New Mexico, where Hough lawyered for a brief time in the early 1880s. 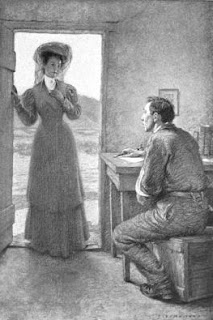 The central character is Dan Anderson, a young unmarried lawyer, who much like Hamlet is at loose ends and a shade melancholy. Heart’s Desire is a retreat for him from the heartless world of Yankee capitalism and politics as practiced back in “the States.” It’s also the refuge of a wounded soul rejected in his wooing of a girl, Constance Ellsworth. Her father, a captain of industry, has found Dan unqualified to be his son-in-law.
The heart of the matter. The longing – or heart’s desire – that is the central theme of the novel belongs first of all to Dan. He yearns for recognition of his worth as a man, and he yearns for Constance. But his is only part of a chorus of yearning in the novel. The town itself yearns for a kind of prosperity that would come with the building of a railroad. There are gold and coal in the surrounding hills, and the residents live in hope that they’ll win the interest of “Eastern Capital.”
The theme of yearning plays itself out in other ways, too. For contrast, the cowboy Curly sets his sights on a marriageable girl, whose family arrives in town, and is determined to marry her before even knowing her full name. In fact, she’s never known as anything but “the Littlest Girl from Kansas.” Self-confident in everything, Curly seems to succeed without effort. He becomes a married man in a gap between chapters.
Meanwhile, there are simple luxuries that the residents of Heart’s Desire mostly do without. The purchase of four cans of oysters, a bottle of champagne and a cake to complement a Christmas dinner is cause for great excitement among a small bunch of bachelor friends. The novelty of a new phonograph keeps them entertained for an entire night. On another day, they are attempting to master a recently imported lawn game called croquet. 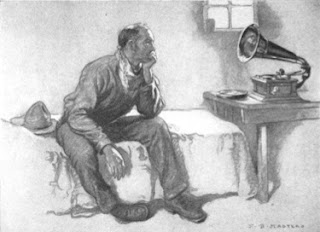 The most poignant episode in the novel involves Tom Osby, a middle-aged man who seems to have lost track of how often he’s been married – often enough, he says, to be an authority on women. He falls in love with the voice of an operatic singer whose recording of “Annie Laurie” moves him to the depths of his soul.
Like Curly, he goes after what he wants. When he learns that the singer is with a touring opera company, he travels some distance by wagon to find her. Discovering that they are both natives of Georgia, they quickly establish a Southern rapport. And for an evening, she gives him a private concert.
Men without women. These few women are nearly the sole members of their gender between the covers of this novel. Heart’s Desire’s residents are nearly all male. There is a camaraderie among them that has grown from the one thing they all have in common – the absence of females. They make up for that absence with a kind of warmth and mutual respect that softens the discontents of living solitary lives. And they trust the most intelligent among them, Dan, to look after their interests – “to take care of” them, in his words. 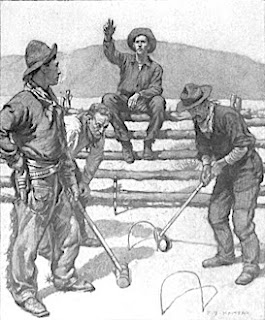 The five pals at the center of the novel hang out together along a corral fence in town and keep each other abreast of what they’ve been doing, thinking, and feeling. Along with Dan, Curly, and Tom, there’s McKinney, who is Curly’s foreman, and another young lawyer, who is never named and functions sometimes as the novel’s narrator. (In the opening chapter, he refers to himself in the first person and later in the third person, as “Learned Counsel,” a nickname Dan Anderson gives him.)
Women, by their absence, are idealized as almost ethereal in their purity. The vision that grips the imagination of the men is of a girl in a white dress with a blue sash, playing a parlor piano of a summer evening and singing softly along. Hough exaggerates this heart-stopping image to give the men’s obsession a touch of humor. But you sense that he’s writing from personal experience.
The arrival of orphan twin girls nearly staggers the men, overcome as they are with concern for their welfare. Angels descending from on high would not cause more of a stir. Hough lets us see them as typically ordinary kids, secretly eating forbidden candy and letting a parrot take the blame. But for the men of Heart’s Desire, they are incapable of doing any wrong by nature of their age and gender.
Constance, it turns out, is more than a pretty face. When one of the twins samples a tin of lye, thinking it's someting edible, Constance has the presence of mind to rub lard into the girl’s mouth to stop the burning. She also knows her own mind and resists the intentions of men she doesn’t respect. As a woman, however, she is prevented from being proactive in matters of the heart. The man she loves has to read her mind and overcome all obstacles to win her. She gets impatient with him when he doesn’t.
When romance reaches an impasse, it’s Dan’s friends who play Cupid and come to the rescue. Tom and Curly engineer the writing of a supposed deathbed letter to entice Constance to return to Heart’s Desire and be reunited with Dan. The longing for love in each of their hearts is fulfilled, and Dan wins the recognition he’s wanted by being nominated for public office. He will represent the Territory in Congress.
So Hough gives us a happy ending, even while we know that progress and civilization are on their way to transform Heart’s Desire. Paradise will be lost forever, but its memory will continue to inform the future for those who do not forget what it represented. Anyway, love conquers all.
Image credits: All images from the first edition of the novel
Coming up: More cowboy memoirs
Posted by Ron Scheer at 5:43 AM