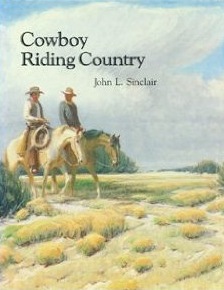 John Sinclair (1902-1993) was a Scotsman who settled in New Mexico in the 1920s and became that rare combination of cowboy and writer. He explains in this collection of essays how real cowboys of his youth scorned writing as "foofaraw," yet his admiration for them is untempered.

Unschooled men of remarkable toughness and skilled at working cattle, especially those who lived through New Mexico's lawless frontier years, they achieve heroic dimension in these pages. Sinclair also writes here of his life as a kind of western H. D. Thoreau, living a young bachelor's life in a mountain cabin west of Roswell, NM.

Meanwhile, he cowboys for enough pay to buy grocieries and essentials (and he remembers the price of everything). There are descriptions here of neighbors and acquaintances, including an old Mexican with a fearful reputation who calls Sinclair "amigo," and a family who asks him to play Santa Claus for their kids with hilarious results.

There are rhapsodic descriptions of New Mexico and nostalgic histories of the ranchers who settled the Pecos River Valley. A resident of Lincoln county, Sinclair devotes many pages to a retelling of Billy the Kid's story. There are ghost sightings from 1906 and recollections of the songs sung by cowboys on the open range, 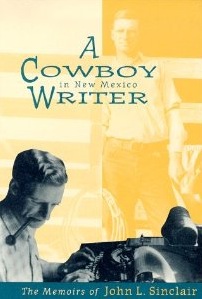 He gives tribute to a family of expert saddlemakers and remembers an aging rancher still seeking the company of working cowboys in his last days. Finally, he writes two contrasting chapters on a remote desert location that became the site of the first nuclear explosion in 1945, an event that in his view brought an end to a world he obviously loved deeply.

Eager to share his extensive knowledge of New Mexico and Arizona history, Sinclair writes sometimes at great length. His book is illustrated with many nicely rendered drawings and paintings by artist Edmond Delavy. Sinclair has another memoir, A Cowboy Writer in New Mexico, written when he was ninety. Both are out of print, and shouldn't be.