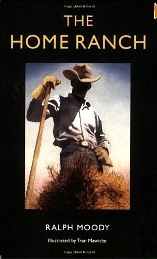 This cowboy memoir is a bit different from the rest. It is more about ranch work than the open range, and the cattle business is in milk cows rather than raising beef. Notably, "womenfolk" also figure into the picture, a change from the usual all-male accounts of early-days cowboying.

Written more like a novel than a memoir, the book tells of Moody's summer as a very young cowhand on a ranch in the foothills of the Rockies, outside Colorado Springs. The year is 1911 and Moody is just 12 years old, already helping to support his widowed mother.

The book is full of closely observed details about the day-to-day work of ranching with horses. A reader becomes easily immersed in this world and its routines of rounding up, cutting, sorting, and driving cattle, picking and using a string of horses. There are also the adventures occasioned by dust storms, a flooding stream, and getting lost in the mountains while cutting trees for fence posts.

The other ranch hands are well drawn, including a villainous character who starts a vividly described fist fight in the bunkhouse. For the fatherless Moody, the boss and foreman provide the nurturing support needed by a youngster becoming a man.

Meanwhile, the foreman's strong-willed daughter (to whom the book is dedicated) cuts her own wide swath through the story's narrative. Moody, who took up writing in his later years, is a masterful storyteller and makes this bygone world come to life.