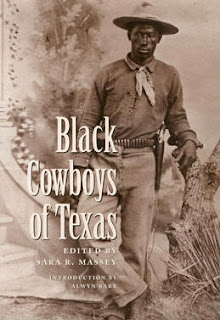 Ever since reading David Cranmer’s terrific story “Miles to Go,” I’ve been wanting to visit this topic. It’s a little off the main trail for me, but I want to take a detour through the subject for a couple posts here at “Buddies in the Saddle.” That topic is Black Cowboys.

I’m starting into a book published by Texas A&M University Press called Black Cowboys of Texas (2000). It’s a lengthy anthology, with profiles of many African American cowmen and a fine selection of photographs. The work of 27 different authors, it’s edited by Sara Massey, who until retirement was curriculum specialist at the Institute of Texan Cultures, University of Texas at San Antonio.
Drawing on WPA materials, interviews, and documented sources, the book tells of the African Americans who worked cattle on the plains and prairies of Texas. Contributions are grouped chronologically: “The Early Cowboys,” “Cowboys of the Cattle Drives,” and “Twentieth Century Cowboys.”
Just reading the Preface and the Introduction to Part I, you get enough information about Black history in Texas to undo many notions from all-white Hollywood westerns and genre fiction.
Some myth-busting. As long ago as the Spanish colonization of Texas in the 18th century, there were black and mixed-race people living there. A census in 1792 recorded almost 3,000 residents of the colonial settlements. Fifteen percent of them were of African descent or mixed race.
After Independence from Spain in the early 19th century, there was an influx of newcomers from the Southern States. These were slave owners, and by 1836, when Texas became an independent republic, slaves numbered about 5,000. These mostly worked the white-owned plantations and farms, while a few herded cattle, mostly on foot, in the prairies along the Gulf Coast and the frontier.

By 1850, when Texas had joined the Union, slaves numbered 58,000. Ten years later, on the eve of the Civil War, this number had grown to 182,000 and amounted to 30% of the entire population. From colonial days there had been blacks who were free-men in Texas, yet by this time records show that there were maybe only 355 of them, and the number was dwindling. Meanwhile, a few thousand slaves are believed to have fled to Mexico, Kansas, and Indian lands.
Emancipation came with the defeat of the South, but conditions for blacks did not significantly improve. They could not vote, testify in court against whites, or share public accommodations. And conditions for their labor remained much the same. Violence against blacks often took the form of lynchings, and the KKK emerged as a vigilante presence.

Side note. This period in history is represented with some attempt at accuracy in the Poitier / Belafonte film Buck and the Preacher (1972). Here are the opening sequences of that production:
Following the Civil War, blacks could attend school for the first time, and literacy increased to about 25% in 1880. Yet, like restaurants, hotels, and theaters, schools were segregated, and they were poorly funded.
Black cowboys. The cattle boom that began in the late 1860s provided employment for many black men who had worked cattle and broke horses for their former owners. During the nearly two decades of the great cattle drives, there was an astronomical demand for seasonal labor. Estimates for employment of blacks run as high as 25% of the cattle industry’s work force. Another 12% were Mexican. That means that as few as two out of every three cowboys on the trail were Anglos.
These estimates hold up under challenge – and they have been challenged. There are various ways of counting heads, and an exhaustive analysis of the records supports the larger figures.
The implications for writers of western fiction are many. Larry McMurtry’s portrayal of Deets in Lonesome Dove is a beginning. But his is only one of countless thousands of stories about blacks in the West. Like Ralph Ellison’s Invisible Man, there’s rich potential for an Invisible Cowboy. I’d love to read it.
In the meantime, we have books like this one, Black Cowboys of Texas, and I plan to report more of it here as I go along. For Walker Martin and everybody else who has wanted me to post a review of the gargantuan Trail Drivers of Texas, I’ll be tackling that 1044-page volume, too. So stay tuned.
Further reading:
Meet some famous black cowboys
Federation of Black Cowboys
Photo credits:
Deep Springs cattle drive, Deep Springs College, California, 2005, wikimedia.org
Coming up: J. Marvin Hunter, The Trail Drivers of Texas (1925)
Posted by Ron Scheer at 7:23 AM