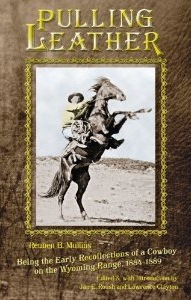 Among the many cowboy memoirs, this is another good one. Seems like every old-time cowboy remembers it in a different way, and our picture of that time takes on new depth. Cowboying in Wyoming in the 1880s, Reuben Mullins was a contemporary of Owen Wister, whose trips to the West also took him there.

Each saw the rawness of life in the frontier towns, loved the beauty of the open ranges, enjoyed the company of working men and admired those whose courage, stoicism and valor made them top hands. Like Wister, Mullins subscribed to the he-man mystique celebrated by Theodore Roosevelt. Both men were also disturbed by the prevalence of mob violence and lynching on the frontier.

Each lamented the passing of the Old West, and while Wister returned East to become famous as a writer, Mullins went to med school and practiced medicine in Nebraska, first as a doctor and then as a dentist. He didn't write his memoir of cowboying until the 1920s, when he was in his 60s. He died in 1935, his memoir unpublished. It wasn't discovered until the 1980s and was published then by western scholars.

In his short career as a young cowboy, Mullins was known first as a blacksmith, a skill he had learned in Iowa before going out West. He also supplemented his income with coal mining during the winter months. For a time he ran a goods store in Douglas, Wyoming. Neither a drinker nor gambler, he saved his money and counted among his friends future bankers, senators, and governors.

He regarded cowboying as an irresistible "addiction" even while his memories are often of being unhappy - the weather being too wet, too hot or cold, the days too long, the down time dispiriting, the foreman too seldom granting him the appreciation Mullins felt he deserved. Meanwhile, a reader will find the usual accounts of roundups, cattle drives, good and bad horses, accidents, the cook's food, and pranks played on greenhorns.

Interesting are descriptions of bunkhouse pastimes, including boxing, foot races, and games. There's also a curious exchange of letters with women back East interested in marrying a cowboy. (On a return trip to Iowa, Mullins actually looks up the girl he's written to.)

We also get to witness the impact of a respectable woman's presence at the ranch. At the other extreme, Mullins reports a sighting of Calamity Jane, sleeping off what he assumes to be a drunk. The book includes five period photographs, two of them of the author.
Posted by Ron Scheer at 5:54 AM