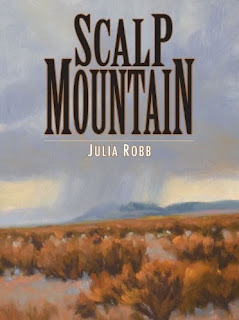 
This is a fine novel. If you drew a line between Lonesome Dove and All the Pretty Horses, you would find Scalp Mountain somewhere along the way. Robb immerses you in a West that is saturated in violence and the sorrows that violence brings with it.

It is the 1870s in the border country along the Rio Grande and points west. The killing fields of the Civil War are a fresh memory, and the atrocities of the Indian Wars continue to haunt the days and nights of both whites and Apaches.

Plot. In the midst of all this, a young man, Colum McNeal, is pursued by killers. A fugitive, he has blood on his hands, having done the unspeakable, killing his own brother. He believes his pursuers are gunmen hired by his enraged father. One of them, Lohman, is a man he’s known for many years, who has mysterious reasons of his own for stalking him.

He has also been picked out for revenge by an Apache, Jose Otero, whose family has been killed by whites and his infant son taken. A fierce warrior, he thinks of himself as already dead. He is driven only by his last desire to break the hearts of those who have broken his own and his people’s spirits.

A well-meaning ranger, Captain Henry, complicates matters by saving the life of Otero’s infant son and giving him to the care of a childless couple, Michael and Clementine. When Otero abducts Clementine and his son, there follows a long chase into the Big Bend country, an arid and unpopulated desert region along the Mexican border.

Among this party of soldiers and civilians, lives are lost in firefights with Otero’s men. When Clementine is found, most of the surviviors turn back, leaving Colum and a handful of others to follow Otero. Among them are the generous and fatherly Captain Henry and the mysterious Lohman.

There are still many treacherous miles to cover and several turns of plot before the story reaches its end, steeped in more bloodshed and sorrows. Robb leaves a reader with this feeling you get sometimes from both McMurtry and McCarthy, that the West was won at a terrible cost, whether men or women, Indian or white, living or dead.

Heroism. The novel is compelling for the way it takes the elements of the traditional western and casts them in an unaccustomed light. Elmer Kelton would do something similar in his Texas Ranger trilogy, Lone Star Rising, but his focus is on the heroism found on both sides of the Indian Wars.

Robb looks past that, not to deny it, but to shake us to the core with the uncertainties and anxieties of living in those times. Also, to strip away some of the myth that obscures history. She humanizes the heroism, and doing so bonds us to her characters as people with hopes, fears, and mixed motives little different from our own.

Some might call her central character, Colum, an anti-hero. He harks back to Cain, the brother-murdering son of Adam and Eve. Alone in the world, he is haunted by guilt, regrets, and painful memories. A sexual urgency in him draws him powerfully to the wife of his friend Michael. We admire him finally for the courage to face whatever threatens to kill him, including his unforgiving father.

Wrapping up. As I began by saying, this is a fine novel. I rarely say about a novel that it was hard to put down. That’s no reflection on good writing; I’m just easily distracted. But there were times when this one had me and refused to let go. For anyone who likes their westerns well grounded in history, this is one you don’t want to miss.

Julia Robb describes herself as a former journalist and magazine writer, who grew up in small-town Texas. She now lives in Marshall, Texas, where she works as a free-lance editor. You can read about her life growing up at her blog. Scalp Mountain is currently available as an ebook for the kindle.

Julia Robb has generously agreed to talk here today about writing and the writing of Scalp Mountain, so I'm turning the rest of this page over to her.

Fellow Texas writer Larry McMurtry has said, “Backward is just not a natural direction for Americans to look—historical ignorance remains a national characteristic.” Would you share that opinion?
Absolutely. Americans do not know or understand their history, and they have been brainwashed to believe in good guys and bad guys: Somebody has to be right. Liberal thinkers enjoy exposing notables as imperfect and more traditional thinkers believe in the myth of the heroic.

The truth is in between. From the beginning of the world, humans have been imperfect and complicated, thus our history has been imperfect and complicated. Thomas Jefferson was an impressive person and one who, with many others, risked everything to fight the English, but he was also human and probably had a slave mistress. Was he a bad man or a good man? Do we judge him by 21st Century standards, or by the standards of his time?

Much of this ignorance stems from America’s eagerness for the future, which produces a reluctance to look back even one day. It’s easier to put things in categories and go on. Mass media also trains people to want pablum. On the other hand, Americans (and probably most of the world) have always preferred the cheap seats.

How do you define the term “traditional western,” and is Scalp Mountain an example of one?
I tried to write Scalp Mountain as a historical novel, meaning a book which helps explain events during a specific time period, and one which embodies themes. Many novels which appear to be Westerns are not; for instance, Tom Lea’s very fine The Wonderful Country.

I urge anyone interested in the frontier, Texas, Mexico and/or art, to read this book (Lea was a visual artist as well as a writer and he illustrated Wonderful Country). Lea never got the recognition he deserved for The Wonderful Country.

I guess I don’t know what a traditional Western is. I just take books for what they are.

To what extent did growing up and living in Texas help or hinder the writing of this novel?
I couldn’t have written Scalp Mountain without growing up in Texas, with the distances, the sky spreading to the end of the world. It shaped my spirit, although I’m not sure what shape it took. And Texans are not like other Americans and that has to do with their history; particularly the long, barbaric Comanche wars. It shaped the culture. (Read Empire of the Summer Moon, by S.C. Gwynne, to understand this).

I was exiled in Maryland for fifteen years, working, and I can tell you Maryland is wonderful, but its people were shaped by a whole different ethos.

In reading western fiction, can you tell those who write of Texas from a lifetime of first-hand experience and those who don’t?
I’m not sure, I haven’t read that many historical novels or westerns about Texas. There’s really not a whole lot of them. I can sure tell the late Tom Lea grew up in Texas. His tone, meaning the feel of the place, is perfect.

I’ve found women and men write different kinds of books about Texas, and/or the American West. Women writers tend to be sloppily sentimental about Indians and their culture (by the way, I’ve asked many Indians what they want to be called, Native American, etc. and they always told me they are comfortable with “Indian”).

Men tend to be more rigorous, although not always. One Texas writer wrote a novel from the Comanches’ point of view and he didn’t even mention Comanche raped their women captives to death, or kept them in sexual slavery. This kind of stuff is important because it’s truth.

Did any of the characters surprise you as they took shape in the writing?
Henry surprised me. He turned out to be such a character; a man willing to do what he had to do, but loving in his attitudes, poetic (although a terrible poet) and whimsical. I missed him so much after, well, you know...

How closely does the finished story compare to the way you originally conceived it?
It’s pretty much the way I thought it out. The characters grew a little. And the research produced complete surprises. It was a revelation to find that everybody on the frontier scalped everybody else; white men scalped other white men, whites scalped Indians, Indians scalped Indians, Indians scalped whites. In one instance, some Indian even scalped a white man’s dog. That’s true.

Talk about how you decided on the novel’s title.
This story is about the Indian Wars. I wanted to tell a balanced story and that meant demonstrating that both sides were right, both were wrong and everybody got hurt. The wholesale scalping was the perfect symbol for this. Do you remember the scene where Henry and Colum were riding past “Scalp Mountain,” and Colum told Henry why it was given that name?

Pima caught two Apache and crucified them on the mountain. They used real crosses and tied the Apache to the crosses with green rawhide, then left them to die in the sun. That really happened. I went a step further, to illustrate the book’s theme, by having the Pima decorate the crosses with scalps; white, Indian, Mexican.

To what extent was writing this novel influenced by western movies and TV?
I think all American writers have been influenced by film. We’ve had movies now more than one hundred years and it has trained everyone to see cinemagraphically. I know that’s the way I see, when I’m writing.

Talk a bit about the creative decisions that went into the cover of the novel.
I looked online for Texas landscape painters and found the wonderful David Forks. When I looked through his online gallery, I found the book cover. It seemed like a perfect illustration for the book, a somber mountain in West Texas.

I’m grateful to David for letting me use his painting and for designing the book cover for me. I urge everyone to go to his online gallery and look at his work. His website is at fineartstudioonline.com, or write him at davidforks.com.

Do women writers bring something to the writing of western fiction that male writers generally don’t?
No.

How would you hope to influence other western writers?
I don’t know how to answer that. We just all do what we do. I guess I do hope writers would delve deeper into events and produce books which are more complex and nuanced about cultures and people. Some idiot, writing on Facebook, recently declared that Custer was a psychopath. Total ignorance. Custer was not a psychopath.

What can readers expect from you next?
I’m not sure. I’ve written sixty pages of a novel I’m not happy with and it’s in a drawer. I have another finished novel, about Texas in the 1960s, about the power struggle between Anglos and Hispanics, but nobody will publish it. Agents say it’s not a genre novel, it isn’t mystery, it isn’t thriller, it isn’t fantasy, it isn’t a Western, etc., so we can’t sell it. I’m almost finished with a movie script based on Scalp Mountain. No telling what will happen to it.

Anything you’d like to talk about that we didn’t cover?
Yes, I believe life is tragic, but tragedy can produce redemption. Art, at its best, produces transcendence. And that’s what I’ve tried to do with this book.

Thanks, Julia. Every success.