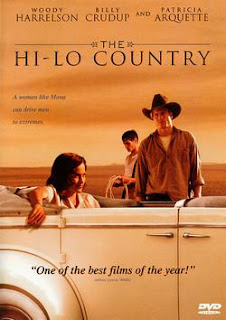 The Hi-Lo Country is an area of northeast New Mexico, celebrated by writer Max Evans in his novels. Published in 1960, The Hi-Lo Country was made into a film in 1998 by British director, Stephen Frears. Set in the 1940s, it recalls an even earlier era of the West, when cattle ranching and cowboys ruled the open range.

There isn’t a gun or a horse in the poster created for the film. Just a cowboy hat on the head of Woody Harrelson to suggest we are somewhere in the West. The 1940s car in the foreground erases any thought of “Hollywood western,” but a few minutes into this movie and you find yourself immersed in a world where cowboys still rule.

There are in fact horses and cattle in the film, fistfights, hard drinking, and a high-stakes game of poker. Small ranchers are up against a land-grabbing big one. Guns are drawn and shots fired. Men die and women mourn. It may as well be 1885.

Plot. The film is about heart-and-soul cowboying. Its two central characters (Woody Harrelson, Billy Crudup) are men of a dying breed. Their friendship and loyalty to each other run deep and wide as the Cimarron. Of the two, Harrelson is the more daring, refusing to be constrained by any obstacle in the way of whatever he wants.

Returning from service in WWII, they partner with another old-timer who helps them start a cattle herd. Their chief antagonist is a cattle baron (Sam Elliott), amused by their efforts to buck the tide of economic determinism. Only big business succeeds now, he tells them. They will fail, and he knows it.

Curiously, what holds your interest in the film is not the conflict between the two cowboys and Elliott or their success or failure as ranchers. The emotional power has to do with the attraction both young men have for a married woman (Patricia Arquette), who is the wife of Elliott’s foreman.

Harrelson is the far more determined and reckless in his pursuit of her, and Crudup steps aside to let them carry on their affair, while seething with unrequited desire. Meanwhile, he half-heartedly takes an interest in a pretty Mexican girl (Penelope Cruz), who comes to understand that she will never win him.

Romance. Love triangles in westerns are not new. A similar example recently reviewed here is the cattle-drive movie Texas (1941), where William Holden confidently takes Claire Trevor away from saddle-pal Glenn Ford. One big difference in that film is that Trevor is a spirited presence on screen, animated and comic.

Arquette’s character is a lovely walking shadow, emotionally drained by a life of boredom. Her sultry appeal to both men is believable yet mysterious. Like a good horse, Harrelson explains, she has “bottom.” He wants her with an undeniable lust that’s the same as his furious love of cowboying and the bond he’s long had with Crudup.

Wrapping up. Though shot entirely in New Mexico, the terrain of the film is often the human face itself. Many sequences are shot in closeup. Shoved so close to the characters, you can feel the heat of the emotions between them.

Sam Elliott fans will be surprised to find him both clean-shaven and a villain. He typically smirks in his scenes, the biggest big shot in the room, who knows nobody can touch him. With a few strands of hair sticking from under his Stetson, he can look slightly demented.

The surprise in 1998 must have been Harrelson’s full-bore performance as the rip-roaring Big Boy. After 200 episodes of his role as the slow-witted bartender in TV’s Cheers, he is totally believable as a larger-than-life cowboy. Billy Crudup, all masculine sensitivity and suppressed desire, makes an excellent foil, both physically and emotionally.

Critics and audiences seem to have found the film disappointing when it was released. Yes, it’s loosely structured, a few scenes seem curiously slow, and a scene set in a blizzard is confusing. But even at almost two hours, it was compelling enough to keep me riveted to the couch. In the end, the separate threads of the film fit smoothly together into a single powerful statement about taking risks and living freely, which has always been the appeal of the cowboy.

The music in the film deserves note, as does the script by screenwriter Walon Green, whose first writing credit in Hollywood was with Sam Peckinpah, for The Wild Bunch (1969). Another novel by Max Evans, The Rounders (1960) was made into a film in 1965, followed by a TV series, 1966-67.

The Hi-Lo Country is currently available at netflix, though unfortunately in a pan-and-scan version. For more of Tuesday’s Overlooked Movies, click over to Todd Mason’s Sweet Freedom.