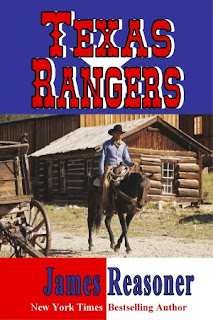 Review and interview
The subtitle for this one should be “Looking for a Fight.” In each of the seven stories between its covers there’s a confrontation that includes gunfire and ends with dead bodies. The body count must have been twenty-five or so when I finally stopped counting.

The Texas Rangers, of course, weren't known for afghan knitting and chili cookouts. Their job from the beginning was to reduce by almost any means possible the number of outlaws and unregenerate Indians in some of the most ungovernable territory in the Old West. Their reputation for fearlessness, rough justice, and a kind of masculine integrity remains alive to this day.

They are perfect material for a kind of western story that calls for all three. They offer the framework, in fact, for two kinds of story: the lone lawman and the “band of brothers” who fight side-by-side to make the country safe for law-abiding folks.

Reasoner’s lone lawman is his ranger Cobb, who appears in the first three stories. The band of fighting rangers are those under the command of Captain John “Rip” Ford (1915-1897). Reasoner makes of Ford a forceful and personable presence among his men, who respect and love him. Though he is not a central figure in the stories, he comes across as the most thoroughly realized character.

Also vividly drawn is Don Francisco, a complex character in “With Nothing But My Naked Knife!” Seeming to pretend to far greater valor than he is capable of, he surprises us by revealing a kind of bravery that chooses to remain unheralded. The mixed-race Indian scout Roque in “Time of the Gun-Wolves” is another character who steps vividly from the page.

Reasoner’s choice of narrators deserves mention, too. The surgeon who serves with Captain Ford admits he’s not a much of a marksman and is committed to saving lives rather than taking them. Thus he offers a perspective on the action that invites a reader into the story as something of a noncombatant observer. That makes an interesting difference.

Offering a glimpse of Texas history, all of these stories appeared in various publications from 1988-2005. They are currently available for kindle and the nook.

Interview
James Reasoner has generously agreed to be with us today at BITS to answer a few questions about writing and the writing of these short stories. So I'm turning the rest of this page over to him.

James M. Cain said of the talent to write, “I think it’s a disease, and the fact it produces books that people buy doesn’t make it any more healthy.” What would you answer to that?
There's probably something to that. I've heard writers say, "I can't NOT write." That sounds like compulsion to me. I've also heard writers say that you have to be crazy to do what we do. Yeah, pretty much.

What does the term “traditional western” mean to you?
I think it's a novel set in the American West during the time period roughly from 1850 to 1900 (although that can be stretched up to about 1920 on occasion), with strong characters and a definite sense of conflict. It doesn't have to have a considerable amount of action, but that certainly helps.

With writers like Elmer Kelton writing extensively about the Texas Rangers, did you feel any particular challenge about tackling this material yourself?
No, not at all. I've been interested in the Texas Rangers, both factual and fictional, for a long time. In fact, when I was in college I took a course in the Life and Literature of the Southwest, and the big research paper I did for that class was entitled "The Texas Rangers in Fact and Fiction". When I began to write fiction, the Rangers were a natural subject for me.

As characters came to life for you in writing these stories, do you recall any of them surprising you?
Characters are always capable of surprising me. In my novels, characters who weren't even in the outline have shown up and played major roles in the books. I don't outline short stories so that didn't really happen with any of these. I didn't really know how all the characters were going to develop, though, especially in the Rip Ford stories. The doctor's voice is really fun to write.

Do you have any rules of your own for incorporating historical figures in your stories?

I try to keep their personalities consistent with the historical record that's been established about them, even when I'm having them do fictional things. With the Rip Ford stories it's fairly easy since Ford's memoirs are such a great source of material.

The stories "Dead Man's Hollow" and "With Nothing But My Naked Knife!" are drawn directly from those memoirs, so all I had to do there was add a fictional narrator to make the stories more personal. The events of the other stories are fictional, but I like to think they fall into the realm of "Well, this could have happened, and if it did, it probably would have gone sort of like this."

How do you go about deciding who narrates a story?


With the doctor in the Ford stories, I wanted someone close enough to the action to be able to describe it physically, yet just far enough removed to be able to reflect on it. I also wanted to write the stories in a slightly old-fashioned style, and a frontier medical man seemed like a good choice for that.

I didn't want to have Ford himself be the narrator, because he was something of a larger than life character to his men and I wanted to preserve that quality. For the most part, though, I'm more likely to have the hero be the narrator or the central point-of-view character in third person. That's the traditional approach and I'm pretty much a traditionalist.

Do you think of or “hear” any kind of music to go along with any of your stories?
Only for certain scenes. If I'm writing a big battle and I hear the theme from THE COMANCHEROS in my head, I know I'm probably doing a pretty good job of it. Actually, I have the soundtrack from that movie and have been known to play it while I'm working, along with other Western movie music. For the most part, though, I want quiet while I'm writing.

Do you think of or “hear” any kind of music to go along with any of your stories?
Only for certain scenes. If I'm writing a big battle and I hear the theme from THE COMANCHEROS in my head, I know I'm probably doing a pretty good job of it. Actually, I have the soundtrack from that movie and have been known to play it while I'm working, along with other Western movie music. For the most part, though, I want quiet while I'm writing.

You have won several awards for your writing. Has that affected your writing in any way?
I don't think so. I've never written about a certain subject or written in a certain way because I thought it would be more likely to win an award. I consider myself more of a storyteller than anything else, and I've always set out to entertain myself first, in the hope that other people will find what I'm doing entertaining as well.

Your wife Livia has often been a collaborator in your writing. To what extent did she have a hand in the writing of these stories?
Some of them were written a good many years ago, but as far as I recall, she didn't help with the plots on any of these, but she did edit all of them, which can range from reading and doing some minor polishing to contributing significant revisions.

One of the great advantages of being married to a writer is that when she finds somewhere I've messed up, I can usually say, "Well, you can fix that for me, can't you?" And most of the time she does, which is great for me because I don't particularly enjoy revising.

What do you learn from your readers?
Not to lose sight of the story. That's the theme that runs through most of the correspondence I get from readers, that they really wanted to know what was going to happen next. I've been saying for years that the best review I ever got came from my dad, and it was just a single sentence he said to me after he'd read one of my novels: "You know, there really wasn't a good place to stop in that book." I knew I'd done my job.

How would you hope to influence other western writers?
Every Western writer I know, including myself, learned how to write Westerns by reading somebody else's books. If another writer can read my work and sense the enthusiasm I feel in doing it and bring that same sort of enthusiasm to their own work, then that's great. Because I firmly believe that despite what some people have been saying for decades, the Western isn't dead, and I don't think it will be in our lifetimes. 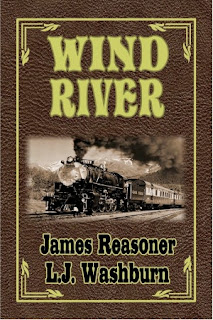 What can readers expect from you next?
The Wind River series that Livia and I wrote a number of years ago has found a whole new audience in the past year or so, since we've reprinted the six novels as e-books. We're planning to write some new books to go with these older ones, and I'd also like to revive my Western mystery series about Judge Earl Stark. It's just a matter of finding the time.

I know you're a busy writer and blogger. I appreciate your taking time to be with us today.
Thanks for inviting me!

James Reasoner's books can be found at amazon and Barnes&Noble. You'll find his website here and his blog, Rough Edges, here.