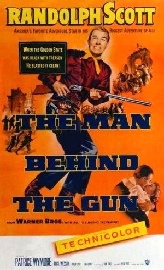 Insurrection in Southern California. Who knew? Actually there was an armed contingent sympathetic to the Confederacy in Los Angeles during the Civil War, and this Randolph Scott western gives a nod to that historical factoid. Just a nod, though. The Man Behind the Gun is basically a political thriller with six-guns.
Scott plays a Union cavalry officer masquerading as a wannabe schoolteacher to uncover cloak and dagger intrigue in the city of surf and sunshine. For sidekicks he has two former Army men (Dick Wesson and Alan Hale, Jr.), who provide the humor. Romance is provided by Patrice Wymore, just arrived in the Southland as the bride-to-be of an Army captain (Philip Carey).

Plot. The sequence of events in this film is so complicated, it would stretch any reader’s patience to summarize it adequately. Let it be said that the cast of characters includes an outspoken advocate for the secession of Southern California (probably an idea that was not new then or since), and a wishy-washy liberal senator who fakes his own death to acquire control of Los Angeles’ water supply. (Yes, you read that right.)

Up to her ears in treachery is a chanteuse with the unlikely stage name of Chona Degnon (Lina Romay), who turns out to be the captain’s squeeze. She gets to sing a Latino song or two at a big pleasure palace with stage acts and table service. The basement is filled with guns and gunpowder.

In an early scene, a smooth highwayman attempts without success to rob a stagecoach. During the failed robbery, Scott meets and befriends the young, real-life bandit, Joaquin Murrieta (Robert Cabal), who had been appearing as a character in movies since 1927. Murrieta happily switches to Scott’s side of the law and helps fight the bad guys, knifing some and igniting a conflagration that burns down the pleasure palace.

Wymore has shrugged off Carey as a two-timer, and she turns the charm on Scott. But she gets kidnapped and taken by the villains into the hills, where they take their stand against the cavalry, who descend (ascend really; it’s uphill) on them guns blazing. She and Romay have a hair-pulling tussle on the floor as the men stand in an open doorway and gawk. Romay finally takes a round that puts her out of action.

In the lead up to the shoot out, Wesson and Hale play a homesteading couple, Wesson in long dress and bonnet, with a covered wagon full of foot soldiers. This arrangement is milked for laughs, as when Wesson pretends to be offended when Scott strips off his uniform to disguise himself in civilian clothes.

And so it goes. The villains are killed or otherwise subdued. Carey tends to the wounded Romay. Scott and Wymore have a big kiss. There’s some physical humor as Wesson and Hale get the last laugh.

Wrapping up. Scott does his usual best in a role that requires him to be quick thinking, confident, and a sharp shooter. Handsome and graceful, he looks good either on or off a horse, in or out of uniform. His wry smile masking his forthright intentions, he’s a stand-up hero.

There’s no room in the busy script for depth of character. The driving intent of the film is to provide plenty of action. Curiously, many of the exterior scenes were effectively shot on the sound stage. Technicolor makes it all look pretty, but the occasional scenes shot outdoors (looks like Simi Valley while it was still ranchland) are less visually interesting.

Character actors Wesson and Hale provide much of the spark in the film. TV fans will remember Hale as The Skipper on “Gilligan’s Island.” Director Felix Feist worked extensively in film and TV from the 1940s into the 1960s. Screenwriter John Twist produced a string of westerns in the late 1940s and early 1950s, going on to write films in other genres, including The FBI Story (1959).

The Man Behind the Gun is currently available at amazon and netflix. For more of Tuesday’s Overlooked Films, click on over to Todd Mason’s blog, Sweet Freedom.