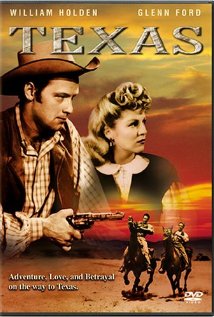 Not long after her role in Stagecoach (1939), actress Claire Trevor teamed up with newcomers William Holden and Glenn Ford for this serio-comic western. Claiming to be a history lesson, it is set in 1866 at the time of the first cattle drive from Texas to the railhead in Abilene, Kansas.

Holden and Ford were at the absolute beginnings of their careers in 1941, and they look it. Ford was 25 and Holden just 23. They play two drifters, broke and unwelcome in Kansas where we first find them, brought before a judge for stealing a pig.

Plot. Events are set in motion when Holden (fresh from his role in the fight movie Golden Boy) agrees to a boxing match with a muscled railway worker. The fight goes 40 rounds and eventually erupts in a melee involving the crowd of wagering spectators.

A week later, the two trail buddies show up in Texas, having crossed Indian Territory without seeing another living soul. They watch, admiring from afar, as a gang of bandits holds up a stagecoach and makes off with a bundle of money. Clever young men, they then rob the robbers. With a sheriff’s posse soon in pursuit, they split up.

Also separated from his horse, Holden hijacks a wagon carrying Claire Trevor. In a long comical ride, she is thrown about the back of the wagon, skirts and petticoats flying. Flash forward, and Ford arrives at the very cattle ranch owned by Trevor’s father, where he quickly becomes a top hand.

Holden gets work on another ranch, where the hands turn out to be the gang of bandits he and Ford robbed earlier. Turns out they’re also a nasty bunch of cattle rustlers, and Holden finds he’s been hand-picked by their boss to join the gang. Not to be under-supplied with villains, the film also has a scheming cattle buyer (George Bancroft) and a crafty dentist played by Edgar Buchanan, whose comic delivery was surely inspired by W. C. Fields.

As if the plot were not complicated enough, Holden and Ford are reunited, and each takes a shine to Trevor. The more forward of the two cowboys, Holden has her quickly headed in the direction of the altar.

Bancroft offers to buy the Texas cattle and drive them to Kansas, but Ford persuades the ranchers they’ll make more money if they drive them there themselves. When they put together a herd of several thousand steers and head north, the villains plan to intercept them, steal the herd, and deliver it to Abilene.

But Holden has yet another scheme, this time to take advantage of Bancroft. In the end, an exchange or two of gunfire, a chase across rooftops, and a settling of scores leaves Holden dead and Ford riding off together with Trevor.


Wrapping up. This is a genuinely entertaining film, well written, and cleverly plotted. The cast is first rate, and it’s fun watching the youthful Holden and Ford. Claire Trevor, already a Hollywood star, has that joyful ability to look gorgeous and play farcical comedy at the same time. Edgar Buchanan is wonderful.

There’s a gritty realism in the film, especially in the crowd scenes, where the extras are dressed in well-worn clothes. Buchanan’s vest, which he never divests, is obviously threadbare. The sleeve of a stage robber’s shirt is torn and his black hat dirty and dusty. The black-and-white photography is in crisp deep focus, with noirish scenes making use of dark shadows.

Much of the film takes place outdoors, and there’s plenty of action with fistfights, gun play, and chases. It’s a little short on history and there’s no mention of the Chisholm Trail, but it does follow the broad outline of the actual first cattle drives. Howard Hawks’ Red River (1948) would find another kind of story in the same material.

Director George Marshall had a long career in Hollywood, with a flair for comedies set in the West, most notably Destry Rides Again (1939). The three writers with credits for the film were Horace McCoy (Rage at Dawn), Lewis Meltzer (Comanche Territory), and Michael Blankfort (The Plainsman). Maybe significantly, cinematographer George Meehan was shooting Three Stooges shorts at the time.

Texas is available at netflix and amazon. For more of Tuesday’s Overlooked Movies, click over to Todd Mason’s blog, Sweet Freedom.