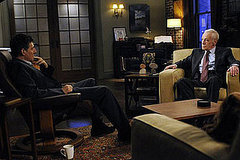 The contradiction I find at the heart of therapy is in the understanding that every choice you’ve made leads to who and where you are now. You assume that some of those choices were “mistakes,” or you wouldn’t be sitting there with a therapist. Next, you understand that every choice, good or bad, was made in self-interest. Each one seemed a good idea at the time. It’s only a mistake when you learn later that it wasn’t in your best interest.

The contradiction is that nothing really changes when you understand this. You can’t change the past, and the future is the same crap shoot it’s always been. You may think that you can do better by making choices that are somehow more in your best interest, but your own track record at this will tell you otherwise.

It’s not a very profound book, but Daniel Gilbert’s Stumbling on Happiness puts some cognitive science behind all this. Research shows, he says, that people are very poor predictors of what will make them happy. This is an idea that would have been out of bounds in my own therapy, of course, because it comes from a book. (See last week’s post on this topic.)

But therapy will get you believing you have a lot of unlived life, and fill you with a feeling of deep loss. You may come to see your life as derailed at some point, like I did, and that it never followed the more fulfilling course it might have taken.

The false hope is that with this knowledge you can somehow make up for all those lost years and start living for real. But if there’s a way to go back fifty years and start all over again, I haven’t figured it out. There’s a reason people say you’re only young once.

Family. The assumption under the contradiction at the heart of therapy is that one’s life is forever shaped by what happens in its first few years. The particular dysfunction of your family marks you for life. No matter what your age, you’re still the kid thinking and feeling the way you did back then to survive.

So sooner or later, therapy is about blaming everybody, including yourself, for what happened in your family. All those survival choices you once made, and are still unconsciously making, well, you were a preschooler back then—but you’re an adult now, and you’re still making them. So you get some of the blame, too.

Character. I’m not against feeling good. But if mental and emotional health is simply about whatever makes you feel good, there’s more I can say on that subject.

I’d start with self-respect. Like many qualities of character, you don’t acquire and keep self-respect by always doing what makes you feel good. It’s more about doing what you hope is the right thing, which often means putting someone else’s interests before your own. Which typically causes you some discomfort.

But loss of self-respect doesn’t feel so good either. So are shortfalls in a list of other character traits, like loyalty, commitment, keeping promises, care giving, accountability, honesty, and so on. All of these are measures of conduct in dealing with other people.

Working with a therapist, I began to see that therapy doesn’t acknowledge this kind of thinking as valid. Continuing in a course of action that considers the interests of others looks too much like self-sacrifice. If it’s not self-serving, why do it?

Doing right by other people is all very “noble,” as therapy would have it, but surely not in one’s self interest. You have needs that come first. Well, I had trouble buying that attitude, and I still do.

Wrapping up. Therapy offers the tempting proposition that I shouldn’t let others get in the way of doing what makes me feel good. I understand that life is trial and error, so I may have this wrong. But I don’t believe we were put on Earth just to please ourselves. That’s a want, not a need.

Accommodating others doesn’t have to be people pleasing. On the other hand, if neglecting others causes me some guilt, maybe there’s a good reason for that. Either way, I won’t feel hunky dory. And there may very well be no comfort zone between them.

But a history of discomforts is not a sign of a life misspent. Some of the best advice I ever got came from an employer and colleague 40 years ago. It does much to reclaim all the years since then as “lived” and not lost. Undaunted by the deficiencies of the day, he would simply say, “You do the best you can with what you’ve got.” And it turns out that’s often enough.