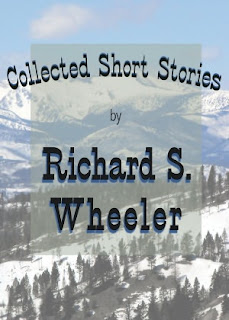 Review and interview
I don’t know if this analogy holds up, but in this collection of stories there’s a near perfect example of what it is to read a Richard Wheeler story. Narrated by an undertaker, “Dead Weight” introduces us to a coffin maker, who makes a coffin that’s a work of art.

Constructed of three kinds of ebony wood, it is watertight and airtight, and so cunningly put together you cannot find the seams. Inside, it is comfortably appointed. Outside are silver handles, enough for ten men to carry it to a final resting place, where it will last until Judgment Day, if not longer.

Where the analogy breaks down is the “dead weight” of the title. These stories have a feather lightness. They make storytelling look easy, and in that way they show the craft of a skillful artisan at work.

A nifty trick, and I don’t know how he does it, is to have historical figures walk blithely in and out of his stories set in the Old West, as if they are unknowns. Wyatt Earp appears briefly in two of them, “Dead Weight” and “Hearts.” The latter is about a Pinkerton agent posing as a lady faro dealer. Yet Wyatt’s presence has no more weight than a fictional character, and a marginal one at that. There’s no aura about him of the legend he would become.

This is a fine irony. And the pleasure in many of the stories is in the bemused way they observe human behavior as it’s found among westerners—and all these stories, whether set in the past or not, take place in the West. In “A Commercial Proposition,” the irony is straightforward. A woman single-handedly stops a pox-bearing river steamer from docking at Fort Benton, while the men of the town cower in disarray and confusion.

“The Great Filibuster of 1975” comically portrays some DIY international land grabbing along the Arizona-Mexico border. In “The Last Days of Dominic Prince,” an old-school rancher, living at a time when hippies roamed free, goes public with news that he’s shot and killed a wildcat. With his Old West assumption that humans are still the endangered species, he gets into serious hot water.

It’s hard to pick a favorite of the bunch, but up near the top for me is “The Tinhorn’s Lady,” about a young immigrant doctor who has fallen in love with the Wild West. As anyone who writes fiction knows, endings are hard, but Wheeler makes them look effortless with the final words of this one:

He had intended to sow a few wild oats for a few years and then sail for Le Havre, having had his fill of American wildness. But this morning he knew he wouldn’t. He would never have his fill of this reckless people and this new land.

Another gift is the ability to write of sentiment without sliding uncomfortably into sentimentality. Wheeler masters this, too, though I couldn’t tell you how he does it.

In “The Business of Dying,” two young men in the gold fields of California spend a last evening together as one of them, very sick, confronts his own imminent death. The tenderness between them may seem idealized, but you understand reading this story how premature death from accident and disease haunted the lives of far more westerners than death by violence.

This is a fine collection. All but one of the stories have appeared previously, in publications from 1997 to 2009. The one new story, “Looking for Love at a Romance Writers Convention” puts its western novelist in the company of a gathering of romance writers. Given his dubious reasons for being there, the outcome is again perfectly ironic. Collected Short Stories is currently available as an ebook for kindle and the nook.

Interview
Richard Wheeler has generously agreed to an interview about Collected Short Stories and his writing. It's a pleasure to have him here at BITS, and I'm happily turning the rest of this page over to him.

At the Montana Festival of Books last fall, James Burke quoted William Faulkner as saying, “If I had not written my books, someone else would have.” As a writer, do you share that opinion? I typically invert that idea, thinking to myself that everyone has already done one of these, but maybe I can find a way to do it again. This is especially true of standard western fare, such as a story about Custer or Earp or Billy the Kid.

As characters came to life for you in writing these stories, do you recall any of them surprising you? They constantly surprise me. I don't plot my stories. I begin with a roughly-conceived character and put him or her into a dilemma, and see what happens. They head in surprising directions. Dilemma defines the character: it is only when I've got the person in a mess that I see who I'm writing about.

The exception here is when I'm using myself. In the three modern stories, I am actually the narrator. I did go to a romance writers convention looking for romance. I did rent a Sonora desert home from a rancher who roped and killed a mountain lion and ended up being assailed by legions of environmentalists. I did participate in a land grab on the border.

Do you have any rules of your own for incorporating historical figures in your stories? I don't have any rules other than to stay as close as possible to the generally perceived nature of that character.

Talk about “The Business of Dying.” How do you write a story with so much sentiment without slipping into sentimentality? That was my first short story, and I wanted to write something realistic about death on the frontier, omnipresent and stalking anyone of any age. From my readings, I knew that few people regretted heading into the unknown west. They treated it as a gamble, and one easily lost. Dysentery and cholera swept through mining camps and settlements, so it was something all those people lived with daily, and thought about, and planned for. In the mid-nineteenth century, people were much closer to death, and maybe that reality is what keeps the story matter-of-fact.

Some of your stories’ narrators are at the center of the story, some are peripheral observers, and some are unidentified. How do you go about deciding who narrates a story? The narrator of the story supplies its view, or its voice. Sometimes there doesn't need to be any narrator. The story is simply a journalistic account of events and people. But most stories benefit when events are seen through the eyes of someone who has opinions about what is happening. That's mostly an unconscious choice I make.
Do you think of or “hear” any kind of music to go along with any of your stories? On rare occasions a film theme might strike me, even when the music bears no relationship to what I'm writing. Themes from Rio Bravo or High Noon might thread my mind, but so too can something like Gone With the Wind or The High and Mighty. These have to do with emotion, feeling, love, rather than the story I'm writing. She Wore a Yellow Ribbon can start me writing a love scene.

You have won several awards for your writing. Has that affected your writing in any way? They've made me more reckless. I'll put things into stories that I'd once have self-censored for fear of being rejected by publishers.

Montana must be home to more writers per capita than any other western state. How would you account for that? The cynical answer is that it is a cheap place to live and live well. Actually, there are several reasons: The university at Missoula has had a fine writing program for generations. In the seventies a lot of hip writers, such as Tom McGuane, Jim Harrison and William Hjortsberg, landed in Livingston, along with film people, creating a writing community.

But some came because they draw inspiration from the grand landscape. The state welcomes its writers and celebrates them, and honors them with awards and recognition. There was also some history: this was the home of A. B. Guthrie, Jr., Norman Fox, Dorothy Johnson, and a host of others.

What do you learn from your readers? Readers know a great deal more about many subjects than I do, and I often call upon them for expert advice. I also get a sense of what works in storytelling and what doesn't, and whether I've depicted something lucidly or have confused my readers. They are also a reality check. I might want to write about something that proves to be of no interest at all to readers I talk to.

How would you hope to influence other western writers? I've grown weary of the gunfight western, with high body counts, and callousness about death, and like to remind western writers that the field is much broader, with numerous powerful themes. 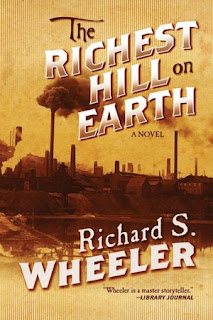 What can readers expect from you next? I've completed a novel called Easy Street, that pursues an early western theme now out of favor: sending a youth into the West to make a man of him. I freelanced it and am hoping for a sale.

Thanks, Richard. I appreciate the time you've spent with us today. Readers can find dozens of Mr. Wheeler's books at amazon and B&N, and for kindle and the nook. Among his most recent is a historical novel, The Richest Hill on Earth, about the legendary mining town, Butte, Montana.