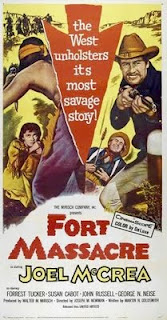 Joel McCrae plays a twisted cavalry officer in this dark 1950s western. Not used to seeing McCrae play an anti-hero, I was surprised that he’s so convincing in the role. A sergeant and the highest-ranking officer after a deadly encounter with Apaches, he takes command of what’s left of a platoon.

Orders are to join up with the main column of company troops, but besides bloodthirsty Apaches intent on doing damage to them, he has to deal with the open hostility of his own men. They regard him as dangerously overtaken by his hatred of the Apaches, who were the cause of his wife and children’s deaths.

Plot. The men and horses are in desert country, and their first need is water. One of McCrae’s men (John Russell) and an Indian scout (Anthony Caruso) find a waterhole, but it’s already occupied by a war party of 50 Apaches. Over the objections of his men, McCrae leads them in an attack to seize the waterhole, which wipes out the Apaches and takes out a few of his own.

Two soldiers join them, having escaped a massacre of another company, which brings their number to eleven. Then they come upon a trader and his unpleasant wife, who do business in furs and contraband with the natives. Their single customer refuses to be taken captive and dispatches the platoon’s scout before escaping, which brings the number down to ten.

Trusting that more Apaches are in hot pursuit, they overnight at a fort-like pueblo ruin. “Fort Massacre,” one of the men mutters. Inside, they find an old, English-speaking Piute and his granddaughter, who have taken shelter.

As the Apache band arrives, McCrae and his men go into hiding. The Piutes manage to convince the Apaches that the white men have gone. They are about to leave when McCrae, unable to resist his murderous urges, opens fire. It’s another massacre, and all of the soldiers are killed as well, except for himself and Russell.

The Piute, a Christianized Indian by his own account, is appalled by McCrae’s actions and says he’s off to the fort to tell the Army the truth of what happened. Russell has remained indifferent to McCrae’s command throughout the film, but he draws the line here when McCrae raises his rifle to kill the old Piute. McCrae gets a fatal round from Russell instead.

Dark. The film is a psychological study of racial hatred and not a far cry in its portrayal from John Ford’s The Searchers (1956). McCrae, like Wayne, is driven by a desire for revenge. Both men still function rationally, but it’s reason in the service of an obsession. Both have gone more than a little off the deep end.

While Jeffrey Hunter plays Wayne’s single companion on his mission to find a kidnapped white girl, the two are civilians working on their own. Fort Massacre places the story in a military context and gives its central character a small company of reluctant troopers. They depend on him for survival, but they think he’s nuts. As McCrae is only a sergeant, they are vocal in their disapproval of his orders.

Russell is the chief exception. Educated and thoughtful, he admits that he has no reason for being in the Army and no real purpose in life. McCrae tells him he lacks guts because he won’t make decisions. For Russell’s character, the story is about finally making a decision—to shoot McCrae.

The Apaches, meanwhile, are portrayed much as they had been since westerns began. With the difference that there’s been an attempt to make them actually look like Apaches. Nevertheless, they are mean and vicious killers, and a few outnumbered but well armed white men can wipe them out by the score.

Writer Martin Goldsmith’s script surprises with a couple moments of noir humor. When the body of a lieutenant is buried, McCrae orders a six-foot deep grave, to which one of the privates adds, “Three feet will be plenty. He was only half a man.”

The darkness of the story is belied by the spectacular CinemaScope and color photography. Shot in red rock, mountain terrain of New Mexico and Utah, the film uses the austerely scenic setting to intensify the isolation and desperation of its characters.

Wrapping up. This was one of McCrae’s last westerns before doing a one-season TV series, Wichita Town (1959-60). There were a handful of film appearances after that, his most memorable being Ride the High Country (1962) with Randolph Scott. John Russell would go on to play Marshal Dan Troop of TV’s Lawman (1958-1962). Also in the cast was character actor Forrest Tucker.

Director Joseph Newman had a substantial Hollywood career doing action, crime, and western films, with TV work in the 1960s, including Twilight Zone and The Alfred Hitchcock Hour. Fort Massacre is currently available at amazon and netflix.

It's also Joel McCrae month at TCM, which will be screening nine of his westerns. Fort Massacre is scheduled for May 29. For more of Tuesday’s Overlooked Movies, click on over to Todd Mason’s Sweet Freedom.