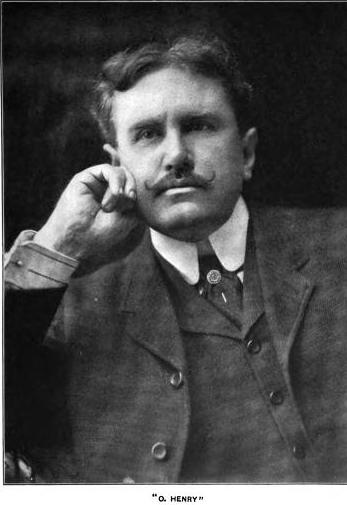 I came across this photo of O. Henry in a February 1904 issue of The Critic. A brief note describes his mysterious appearance among the New York literati:


Less than a year ago the readers of popular magazines began to be startled and delighted by certain fantastic and ingenious tales, mainly dealing with Western life and bearing the strange device "O. Henry" as a signature. In a short time people began to talk to each other about the stories, and very soon they began to ask who the author was.

It was then that a new problem fell upon this over-puzzled age,—who is "O. Henry"? No one seemed to now the author's real name, and immediately vague and weird rumors began to be afloat and the nom-de-guerre was soon invested with as much curiosity as surrounds an author after his decease.

But, like most mysteries, when it was probed there was no mystery about it. "O. Henry's" real name is Mr. Sydney Porter, a gentleman from Texas, who, having seen a great deal of the world with the naked eye, happened to find himself in New York about two years ago, and there discovered a market where people would buy stories of his experiences.

Being of a lazy disposition he very naturally quitted active life and took to his desk. He signed the name "O. Henry" merely because he did not take his real self seriously as a maker of fiction. He really does shun notoriety—a most unusual characteristic among present-day writers—and he disclaims any intention of having purposely created a mystery about his identity. But he is still not too old to become a professional.

It was a fabrication, no doubt invented by William Sidney Porter (1862-1910) himself. The account of his relocation from Texas neatly skips over his time spent in an Ohio prison for embezzlement. O. Henry's collection of western stories, The Heart of the West, published in 1907, was reviewed here a while ago.