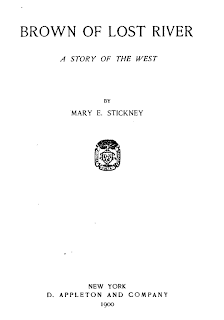 This must be the original “ranch romance.” Set on a frontier ranch fifty miles from Cheyenne, Wyoming, it has cowboys, a roundup, and rustlers, but the central plot line from start to finish is strictly boy-girl.

Brown of the title is a handsome and highly accomplished horseman, who tames and trains horses. The Lost River, where he has a small ranch, is aptly named, as he is himself “lost” in more ways than one. Chiefly, he’s a Prodigal Son who left the East after a Harvard education to escape the judgment of a disappointed and unforgiving father. His heart is also lost to the fair young sister of another ranch owner.

Edith steps off the train in chapter one, fresh from Boston, and reluctantly accepts a buckboard ride with Brown when there’s no one else at the station to meet her. She has a suitor back East who is pressing her to marry. She’s come out West to get some breathing room before accepting his offer.

Plot. Stickney does not over-burden the reader with plot. What she deftly does is to keep her cowboy on tenterhooks for 300 pages, while Edith’s regard for him runs hot and cold. Hers is the age-old romantic dilemma of heart vs. head. Raised to be a sensible, respectable, and dutiful wife, of a certain social standing, she denies the yearnings of her heart.

Brown has no such problem. It’s love at first sight. His only regret is that he has wasted ten years doing nothing with his education and has so little of material value to offer her. He will settle for her friendship, and when she withdraws that after a misunderstanding, he is distraught.

Romance. Stickney is almost cunning as she throws up obstacles to prevent true love from taking its course. A second woman, Artalissa, who’s a ranch cook and housekeeper, has got her eye on Brown and is not shy about seeking his attentions. His gentlemanly politeness to Artalissa is proof enough to Edith that he prefers her.

Meanwhile, Edith’s sense of decorum and lady-like good manners prevent her from letting Brown get too close. When he is about to unburden his heart to her, she recoils in horror. His love is the last thing she believes she wants.

She eventually persuades herself that her reaction to Brown is actually a sign that she should marry her impatient Boston suitor. Encountering Brown on a late-night meander around the ranch, she agrees to be friends again, safe in her belief that she is now engaged to someone else.

When Brown is bitten by a rattlesnake, Edith rides off in wild pursuit of a doctor in Cheyenne, undaunted by the distance and unsure of her way. Technology comes to her rescue after three hours of hard riding (side saddle), when a ranch where she stops has a telephone.

Returning with a doctor, she learns that Brown’s life has been saved by Artalissa, who had quickly sprung into action to suck the venom from the bite. He’s now recovering, with a skinful of whiskey, which seems to be the frontier antidote for snakebite.

Visiting a family friend in Denver, Edith reads news that Brown has been jailed for stealing horses and is at risk of being lynched. He lacks an alibi because he was with Edith at the time of the theft and had promised to keep their meeting secret.

A telegram and a quick red-eye train trip back to Cheyenne, and Edith finds Brown on the station platform waiting for her. Turns out, he’d never been a serious suspect for the crime, and the news story had come from a gullible reporter taken in by wild rumors.

She’s surprised to find Brown in a business suit and headed back East to be reconciled with his father. He’s given up cowboying and has a job offer in New Mexico. The last impediment between them is her wealth and her suspicion that as a poor cowboy, he might be after her money. True love is finally confessed on the last page, when she realizes he knows nothing about her net worth. Quick fade, and we assume they marry and live happily ever after.

The Virginian. Published just two years before The Virginian (1902), Stickney’s story invites comparison to Wister’s novel. Both cowboy heroes are expert horsemen. There are similar differences between them and the girl from the East each falls in love with. The girl’s class and her resistance to his advances offer similar obstacles to romance.

Both cowboy heroes have a tenderness about them and a playful sense of humor. Their feelings run deep. The difference between them is that Wister’s is a man who has grown up in poverty, and Stickney’s comes with respectable credentials. The Virginian is a natural, unschooled gentleman; Brown is a cultivated and educated one.

While Stickney pokes fun at Easterners plunked down in the West, she is even less kind to the residents of the ranches, especially the women. They lack knowledge of or interest in the outside world, dress without any sense of fashion, and are shameless gossipers whenever they get together.

Wrapping up. Mary Etta Stickney (b. 1853) left scant record of her literary output. Circumstantial Evidence, a novella, set in Colorado, was published in Lippincott’s Monthly Magazine in June 1890. FictionMags Index shows two of her stories in The Argosy in 1900-1901. Frank Leslie published her “The World’s Roughest Riding: The Great Cowboy Carnival at Cheyenne” in 1904. That same year saw publication of her collection of western stories, Ouray Jim.

Fans of western romance will find Brown of Lost River an entertaining early example of the genre. It is currently available at google books and Internet Archive, and for the nook. For more of Friday’s Forgotten Books, click over to Patti Abbott’s blog.